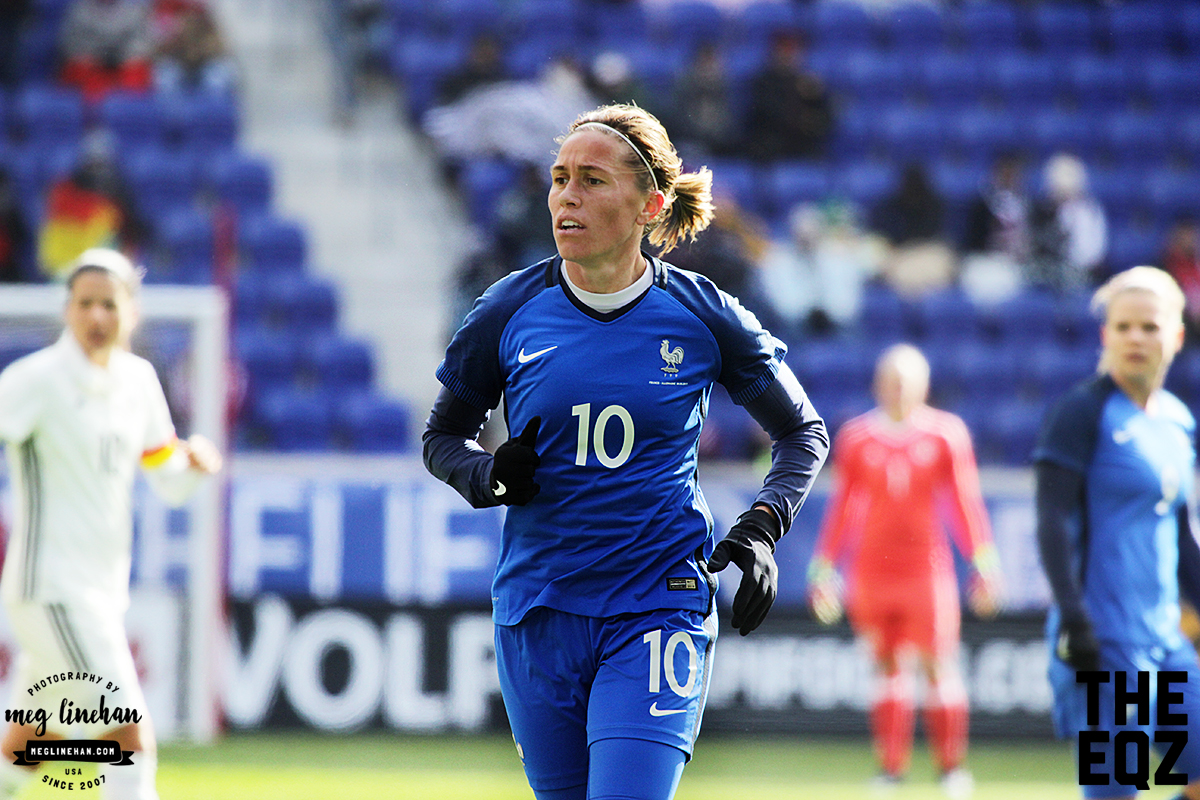 DEVENTER, Netherlands – As we enjoy watching our favorite footballers, there comes a time when we know they will retire and call it a day. France international Camille Abily has been the heart and soul of France. She’s a fantastique footballer that brings fans out of their seats with her clever ball work, terrific creativity, and sublime free kicks. On Sunday in Deventer, Camille Abily played her last match for France.

“Yes, it was my last game with the French national team. We lost. It’s really hard because I hoped we could go until the final,” Abily said following France’s 1-0 loss to England in the European Championship quarterfinals.

Throughout her 183 caps and 37 goals, Abily has been the focal point for the France attack, a magician in the midfield. Other players know they have to step up their game when they play France and Abily.

France have come a long way since Abily made her debut on September 26, 2001.When she takes time to look back on her career, highlights, time with teammates, and memorable moments, there is something she wishes she could have done.

“It’s hard, it’s hard because there is a lot of tournaments, and a lot of emotion,” Abily said “I’m just so proud I could play so many years with the French national. I’m just sad because we never win something. I enjoyed [it] a lot to play for my country.”

France have always had the talent, skill, and depth, but between the ears is where they’ve often fall short in tournaments. Paris-Saint Germain and Lyon players haven’t always seen eye to eye while representing Les Bleues. Manager Olivier Echouafni has shown that France can be a united team, playing for each other and not individually.

The 32 year-old, Abily, sees a bright future ahead for France.

We’ve watched as Sweden, Canada, and the Netherlands have all got behind their teams and supported them immensely during Euro 2013, World Cup 2015, and Euro 2017. France will host the 2019 FIFA Women’s World Cup. In a country with a ‘pardon me’ first attitude, it will be interesting to see how much support France can deliver—not only for France, but all other competing teams.

It isn’t quite clear what’s next for Abily. She recently signed a one-year contract extension with Lyon. Following that, she’s leaving all doors open. Coaching is an option, and you never know if she will get the sideline reporter bug. What Abily does know is that it’s time to hang up her international boots. She’s has a two-year old daughter that will be her top priority.

“I’m still playing with Lyon, one more year with my club team,” revealed Abily. “I just stopped with the French national team. One more year to enjoy and play. I would like to stay in football. I don’t know which way, not yet. Maybe coach, maybe reporter. Yeah, I don’t know yet. I need time to think about that.”

Camille Abily is leaving Les Bleues in a better position than when she first arrived. The next generation of young football players in France have been able to watch her live, wear her kit, and support a superstar female footballer. In conservative France where male footballers dominate the press, Abily has provided a role model for girls and boys to look up to.

The age of time eventually catches up to all of us no matter what our profession is. Abily is choosing to retire from the French national team on her own terms. She likely could have pushed herself to continue on to the 2019 World Cup, but she’s decided to close one chapter and open up another.