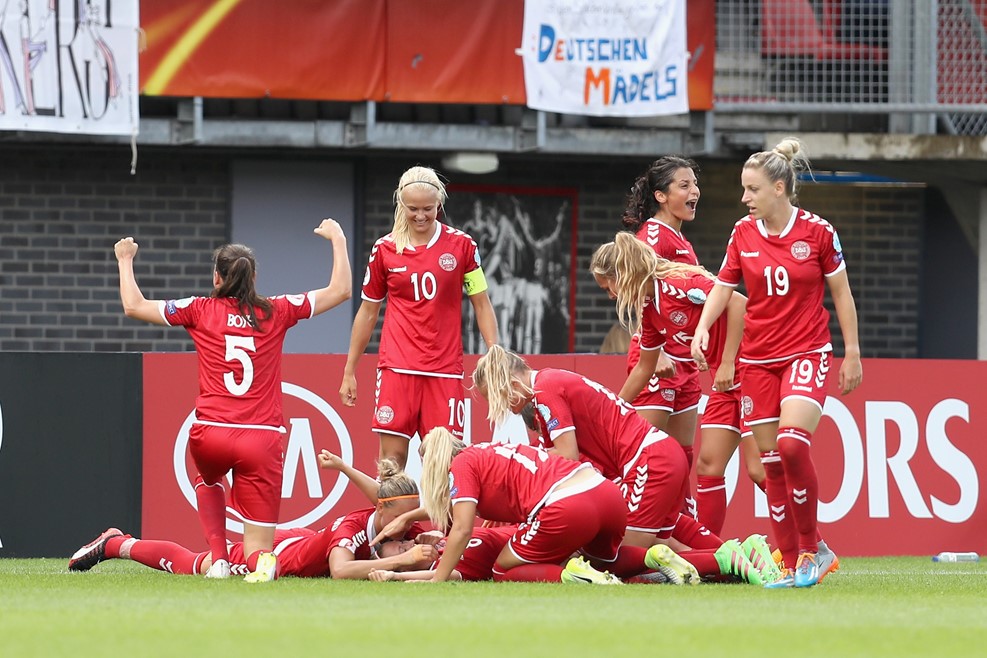 Nadia Nadim scored an equalizer early in the second half and Theresa Nielsen hit the game-winner in the 83rd minute to push Denmark into the semifinals of the European Championship and bring to a halt Germany’s epic run of having lifted the trophy on six consecutive occasions. So long was Germany’s run of dominance that it extended back to when the competition was held every two years. They were last eliminated by Italy on penalties in the 1993 semifinals. That was followed up by a loss to Denmark in the 3rd place match.

In a match postponed a day due to torrential rain that rendered the Sparta Stadion pitch unplayable on Saturday, Germany made a bright start when Isabel Kerschowski’s shot from distance was punched by Stina Lykke Petersen who then lost track of it allowing the ball to bounce down and then in. The goal put Denmark in a hole after only 3 minutes.

Denmark scored nearly as quickly in the second half. Stine Larsen did well to turn a corner on her defender and sent a looping cross to the far post that Nadim leaped high in the air to get a head on it and set the match back to level terms.

Nielsen hit the game winner, also with her head, in the 83rd minute to make good on a half of soccer during which Denmark gradually proved themselves superior to the vaunted Germans. It came in the 83rd minute and Germany could find no equalizer.

Dear @nadia_nadim do you know the song:?"time to say good bye"?But no worries I'm gonna pick you up from the airport on Monday.?#weuro2017