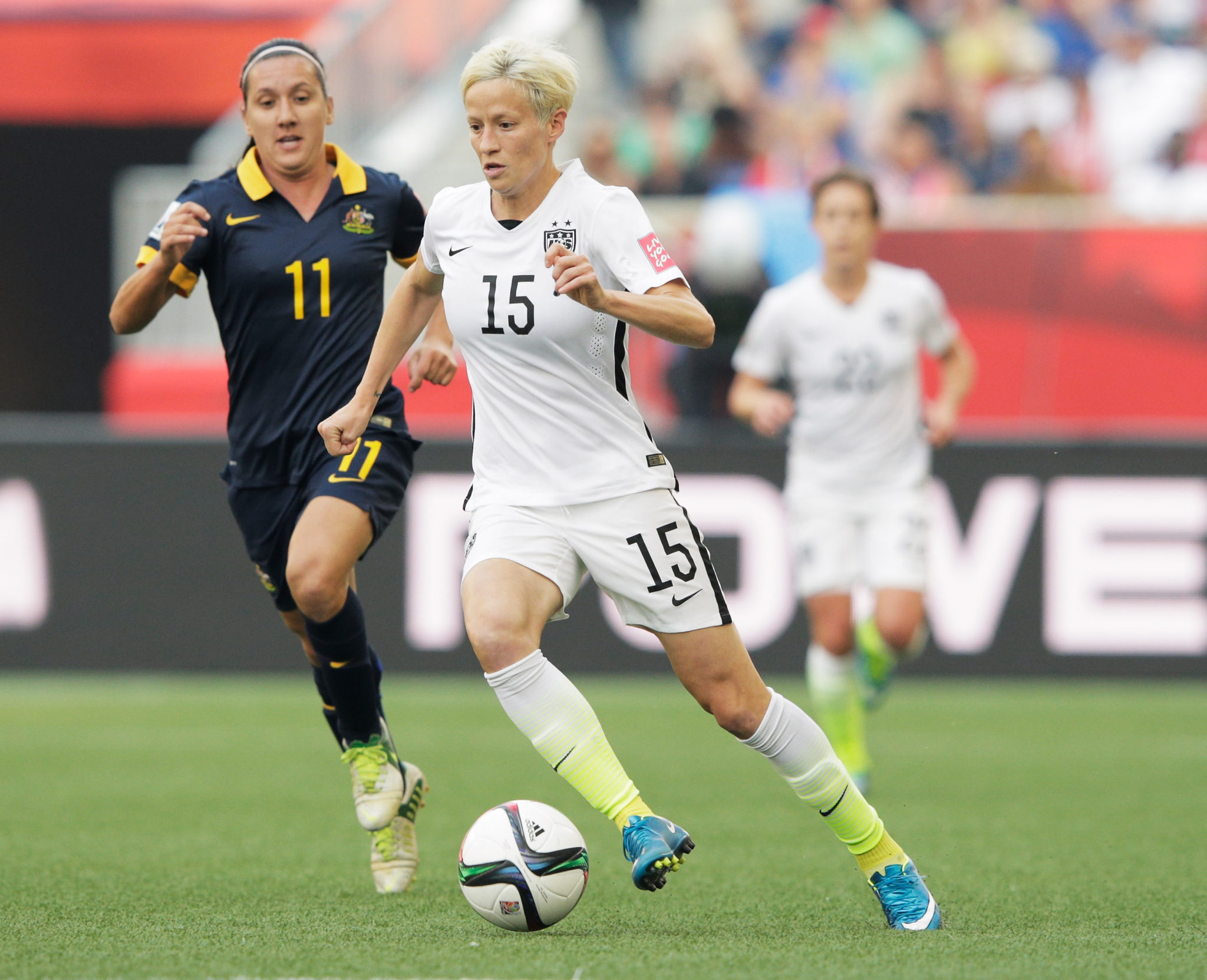 Australia has long chased the USWNT. They open ToN play against each other Thursday night. (Getty Images)

U.S. Soccer’s newest McTournament kicks off on Thursday when Brazil plays Japan followed by the United States and Australia in a doubleheader at CenturyLink Field in Seattle. The round robin event will continue Sunday and next Thursday. The Tournament of Nations is scheduled to be played among the same teams each year there is neither a World Cup nor Olympic tournament and offers juicy matchups all three days and some of the most in form players in the world.

Chelsey Bush and Dan Lauletta go point by point to preview the tournament.

Let’s start with the mandatory question about Jill Ellis’s USWNT roster. What are your thoughts?

Dan: I think I’m either numb to roster conversations or just accepting of the way things are. That said, I don’t have any huge issues with this one. I’d like to see a bit of squad rotation, especially in the back so players like Becky Sauerbrunn can catch a breather now and again, but that is not likely to happen. One player who maybe could have been left home is Morgan Brian. It seems like she has been carrying at least some sort of injury for more than a year and it would be wise to get her fully healthy before seeing if she is going to be part of the group heading into 2019. Out of context I have no issue with Midge Purce getting a look as my philosophy is to call in more rather than less and see how they react. In context shouldn’t players like Vanessa DiBernardo, Danielle Colaprico (in the Morgan Brian boat so probably better left out for now) and several others be ahead of Purce in the pecking order?

Chelsey: Similar to you, I think calling up Morgan Brian was absolutely a mistake, and in fact Ellis has already said she won’t be a 90-minute player. She needs rest to get back to full health, and it seems like no one is willing to let that happen. Given that there are quite a few good center midfielders out there not on this roster, it’s a head-scratcher. Regarding Purce, I’d like to point out that despite seeing a little bit of time in the midfield for Boston, she’s really another forward. If we’re going to add to the large group of forwards, I would have liked to see Ashley Hatch make a return. She’s really been solid for North Carolina. Ultimately, though, I’m less concerned with the roster and more concerned with who actually gets legitimate playing time.

The three USWNT opponents offer very different, very strong competition. Are you looking more for performance or results over the next three games?

Chelsey: Performance. We may wring our hands over losing another tournament if that happens, but I’m over the days where the US plays badly but wins on one moment of individual brilliance. Games like Norway and Sweden really didn’t leave a great taste in my mouth despite the results. You look at the Olympics and the SheBelieves Cup and the Euros, and you see teams that can and have beaten the US when it matters. We’ve been saying the gap is narrowing for a long time, and I think we’re finally starting to see actual evidence that it is.

Dan: Echoing Chelsey, the U.S. has already proven an ability to win matches against most teams without playing well. But so many teams are also capable of getting blown out like in SheBelieves, or frustrated into tactical submission like in the Olympics. It feels like more and more team is reacting rather than dictating. I’m especially curious to see what happens against Brazil. That’s a side that had clearly passed the U.S. by during the last decade only to be held back by an inferior mental game. In 2017 Brazil remain more than capable of whipping the U.S. in midfield so how that is either dealt with or prevented will show us a lot. All that said, if it comes down to the last 20 minutes of the tournament and first place hangs in the balance, winning will take center stage. But over the course of the 270 minutes I’m more concerned with tactics and execution than anything else.

Which USWNT player is most under the gun to perform well?

Dan: The first name that comes to mind is Ali Krieger. A few weeks ago we all thought she had been dropped from the team for good. She’s back now but at 33 (her 33rd birthday is Friday) she’s not being kept around for any reason other than to be on the 2019 World Cup team so there won’t be much leeway. It’s not make or break for Alyssa Naeher but she could put some real distance between her and Ashlyn Harris or anyone else chasing her for the starting nod in France. It is also easy to forget that she has only 15 senior caps (soon to be 18 as Ellis says she’ll play all three matches.) I’m sure some of the younger players are under more pressure than others but that is difficult to gauge without knowing the inner dynamics between them and Jill Ellis. As a side note, I would love to see a Julie Ertz-Abby Dahlkemper center back pairing for one of the games to see how they can handle life without Sauerbrunn. 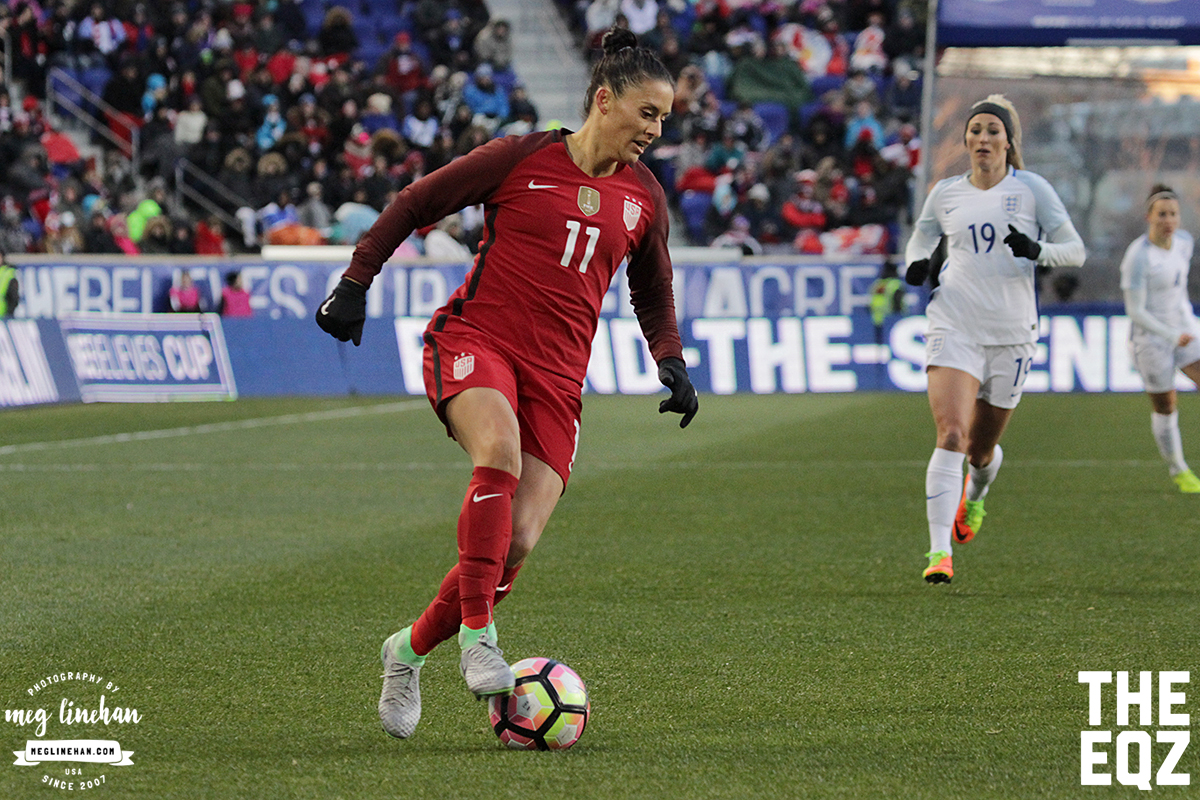 Ali Krieger is back with the USWNT after not being called in for the Scandinavian matches. (MEG LINEHAN/Equalizer Soccer)

Chelsey: Following Krieger, the first veteran name to come to mind is Sydney Leroux. She went to Europe but hasn’t yet played for the USWNT since having a child, so if she gets any minutes, they have to count. She’s also facing a depth pool at forward that only deepened during her absence, and she was never the go-to starter in any case. Oddly, I want to bring up Julie Ertz again, because I’m not certain she’s the chosen partner for Sauerbrunn anymore. Judging by recent club form, she’s also probably the best defensive midfielder on the roster, which I know isn’t Ellis’ focus, but shoring up the spine could solve a lot of the team’s midfield issues.

Let’s talk opponents. What are we expecting? Which players, matchups are most enticing?

Chelsey: I think that the US-Australia game has the potential to be very end-to-end. You’re looking at two teams who excel in transition but may not be as strong defensively, which could make for a really exciting match. Australia’s squad is also a mix of players currently in season and those who aren’t, so it will be interesting to see how they mesh. Emily Van Egmond is one to watch, as she’s improved dramatically since moving to the Bundesliga a few years ago. And who doesn’t want to see more of Sam Kerr these days? I’m also really curious to see how Japan’s youth movement is working out. They’re always a delight to watch because they play such technically sound soccer.

Dan: Marta v Sam Kerr in New Jersey last month was a delight so why expect anything less when they put on their national team jerseys? In fact, Brazil v Australia was pretty darn good at the Olympics last summer. If I could pick one of the three non-USWNT matches to watch, that would be it. I also feel like Brazil is a bit of France West. The federation only recently began throwing serious resources at the women’s side and the results were evident at their home Olympic tournament. But as durable as Marta is she won’t play forever and the window to make good with a top-of-podium finish while she is active is on the way down. Did they wait too long?

Who do you think will hold the trophy next week? Which teams/players will get the most out of the week?

Dan: I have to pick the United States. I’m not particularly confident, and I don’t expect it to be pretty, but I’ll lay out a few reasons. For one, Australia and Brazil both have mental hurdles to get over against the U.S. Second, a defensive line with Sauerbrunn and Short on it and Naeher keeping goal will be tough to beat. Third, piggybacking on Chelsey’s comments above, Australia is half in and half out of season, and Japan is in a bit of transition. All that said there isn’t a game where I feel both teams can’t win so it should be fun to see how it unfolds.

Chelsey: I’m also leaning toward the U.S. I think there is a desire to shake off the sting of the SheBelieves Cup and reassert some dominance, especially on home soil. Frankly, on their best day, the U.S. is the best team out of the group. That said, if I have to pick a dark horse, it’s Brazil. They have the pieces and probably more desire than anyone else, given the times the U.S. has thwarted their paths to podiums.