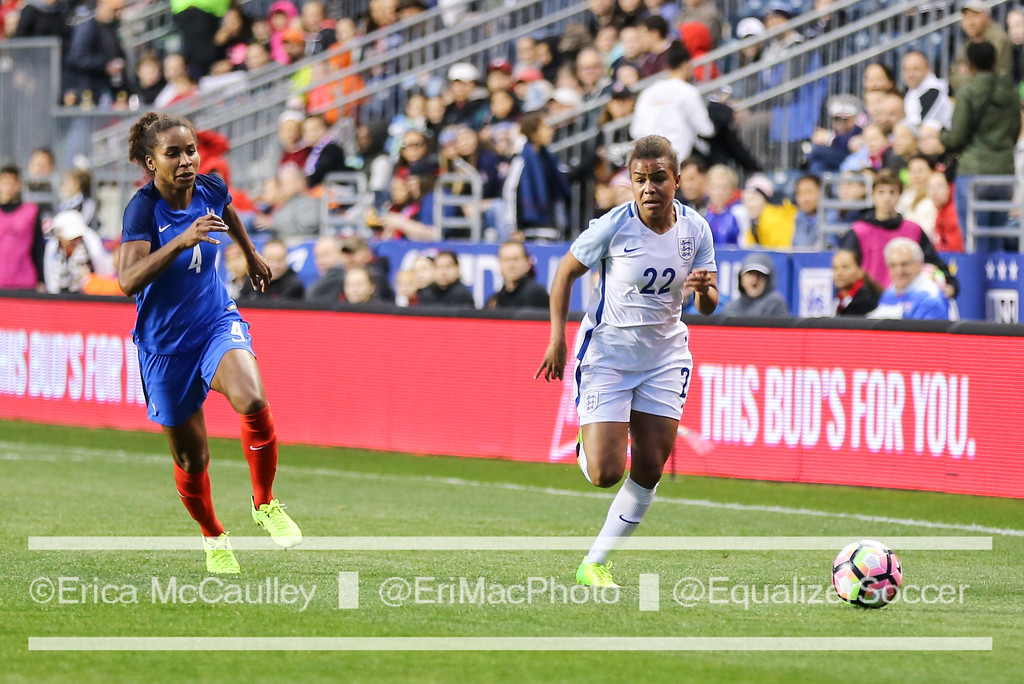 Nikita Parris scored the game winner to send England to the EURO 2017 quarterfinal round against France. (photo copyright EriMac Photo for The Equalizer)re

It came down to the wire for EURO Group D. As the clock ticked down, England led Portugal, 2-1, and Scotland was well on their way to upsetting Spain, 1-0. Only England’s fate was all but certain, as all it would take was one goal by any of the other three for that team to advance. However, no goals would be scored in the second half other than England’s 48th-minute game winner, and the Lionesses and Spain would advance as a result.

England’s defeat of Portugal kept them perfect in group play although the day’s result was largely thanks to Mark Sampson’s B squad. The lineup Sampson rolled out in their final group match had 10 changes from the XI he played against Spain, with only center back Millie Bright starting all three EURO matches for England.

Even without their regular starters on the field, England defeated the Portuguese side thanks to goals by Toni Duggan and Nikita Parris. Duggan capitalized on a goalkeeping error by Portugal’s Patricia Morais, who hit the English striker with a clearance attempt less than 30 yards away from goal. As Morais attempted to run back onto her line, Duggan struck, neatly placing her shot over Morais’s shoulder and into the far upper 90.

Portugal would prevent England from earning its third straight clean sheet of the European Championship when, 10 minutes later, Diana Silva connected with Carolina Mendes on the opposite side of the field for the equalizer. Cláudia Neto sent a perfect through ball to Silva, whose first attempt at a cross deflected off England skipper Laura Bassett and nearly rolled over the endline. However, Silva managed to keep it in bounds to send a second cross attempt, this one successful, to Mendes, who only had to tap into the empty goal mouth before her to put Portugal on the board.

Parris preserved England’s win streak though when, in the 48th minute, she ran onto a short chip from Izzy Christiansen, ran through two defenders, and nutmegged Morais to punch England’s ticket to the quarterfinal round. The result also saw Spain advance despite their loss to Scotland. Although the 1-0 scoreline went in Scotland’s favor and was an upset in itself, it was not enough of an upset as the Scottish needed to win by two goals to eliminate Spain.

Scotland went without a single shot for the first 40 minutes of the match, but it only took one to score in the 41st minute. Leanne Chricton backheeled the ball to herself before sending a long ball behind Spain’s backline. Erin Cuthbert ran onto Chrichton’s ball, but Spanish keeper Sandra Paños came racing off her line in attempt of dispossessing Cuthbert. She was successful in that attempt, but she was unsuccessful in that Caroline Weir was in position to beat Paños to the rebound before beating her again with her run on goal, blasting a shot past two Spanish defenders and into the back of the net for the game winner. The win was no doubt a moral victory for Scotland, ending their first ever major tournament with a win.

England and Spain now advance to the quarterfinals, where a well-rested England will take on Group C runners-up France—who will be without defenders Wendie Renard and Eve Perisset due to yellow card accumulation and red card suspension, respectively—and Spain will face Group C winner Austria. That quarterfinal round will be played on Sunday, July 30 with Austria and Spain kicking off at noon ET, followed by England and France at 2:45 p.m. ET. Both matches will be streamed live on ESPN3.