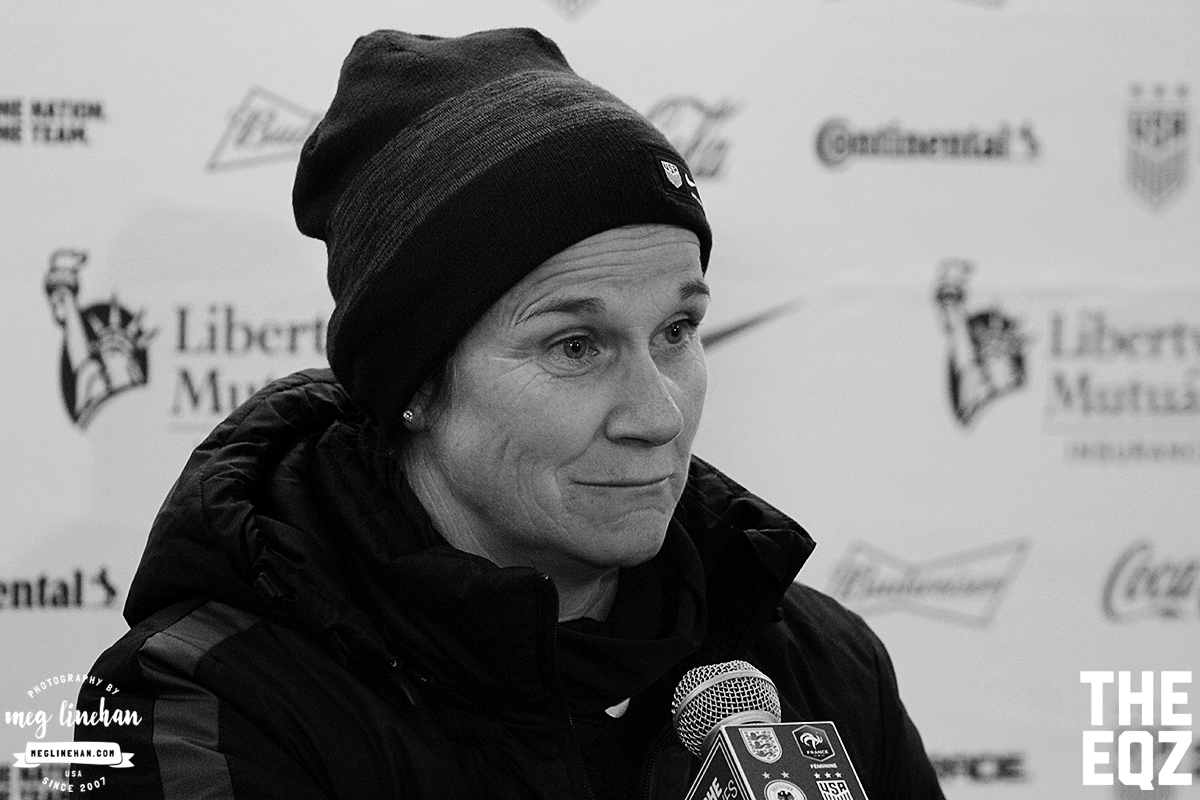 The first Tournament of Nations kicks off tonight with Brazil and Japan facing off before the United States takes on Australia. Last night, ahead of the tournament, head coach Jill Ellis held a press conference to discuss the tournament and her USWNT roster for it.

While many fans and people around the league have criticized U.S. Soccer for scheduling a highly competitive tournament with little turnaround between games in the middle of the NWSL season, Ellis realized that several World Cup staples would be getting major tournament experience via the European Championships that the USWNT would not, and she wanted to find a way to give the U.S. as similar of an experience as possible.

“It’s a big ask, especially for where we are in terms of we’re a team in transition, but there’s no better way to get us ready for [World Cup] qualifying. And then to play these teams and you just learn so much about yourself and we knew we were going to be a younger team, so to play—we were talking today—the top nine teams in the world in one calendar year is pretty good. So I’m delighted we have this. I think it’s great for the fans, but also selfishly, for just our players to get this experience to play against these teams.”

As Ellis said, the U.S. has become a younger, less experienced team than its 2015 World Cup squad was, so a major priority of the tournament is to get players who need minutes more time on the field, a fact that was stressed multiple times throughout the press conference. That primarily seems to include some of the newer faces like Abby Dahlkemper, who recently won her third and fourth appearances for the team during its June Scandinavian Tour. Ellis seemed particularly high on the 24-year-old defender following her performances against Sweden and Norway last month.

“I think she’s got tremendous poise, I think her distribution—her quality, her delivery—I think she’s a natural play maker from the back, essentially, and now couple that with her defending—and I think that’s still a work in progress for her—but she has a raw goodness about her and a physical dimension to her. And I think you have to be brave to be in the back; I think she’s brave,” Ellis said of the center back, whose season with the North Carolina Courage recently saw her named to the NWSL Team of the Month for June. “I think now it’s her consistently being exposed to the nuances to world-class attacking players and how she sees that and deals with that, so I think she’s doing great and I see her as someone we want to continue to invest in as potentially adding depth to that position for us.”

One position where fans can expect not to see new faces is goalkeeper, as Ellis has said Alyssa Naeher, who is currently sitting on just 15 caps, will get all three games. That means that Abby Smith will leave her second consecutive USWNT camp uncapped, while Jane Campbell—barring any unforeseen circumstances—will leave with the one cap she came in with. But that’s all part of Ellis’s bigger plan, preparing who appears to be well on her way to becoming the starting keeper leading up to the 2019 World Cup.

“I think Alyssa’s done very well. We were actually just commenting that I think our two games over in Europe were the first two she’s played back to back. I don’t know how many caps she’s at, but again similar to Abby [Dahlkemper], at this point it’s about getting her minutes and experience in against top teams,” Ellis said.

Ever since the USWNT returned from Rio, the goalkeeping duties have been split nearly 50/50 between Naeher and Ashlyn Harris. However, a quadriceps injury has kept Harris out of the last two national team camps, opening the door for younger players to train with the team and Naeher to see more action. Ellis is already seeing Naeher benefiting from that competitive experience.

“I think she’s starting to fit in. We’ve had different pieces in front of her, which at this point she can expect because we’re not locked down to a starting lineup by any means. I think she’s handled that more. I think she’s grown in her communication and her presence. I think being in the club environment has helped her a lot. I think she’s got good confidence coming in from that environment and brings that to us. She gives us an amazing transition game with her delivery and distribution with her hand and foot.

“I think she’s just establishing herself as one of the top keepers and…she’s going to get the three games because it’s all about getting her more experience at this level.”

As for Sydney Leroux, back in just her second national team camp since the birth of her son, fans likely won’t see much of her on the field. Leroux traveled with the team to Scandinavia but didn’t see any minutes, and Ellis’s statements about the forward suggest that both she and Leroux agree that she is not back up to international match fitness yet.

“While a lot of things are coming back for her, it’s another step in terms of the international level, so I think she recognizes that. Right now what I think she appreciates is just the opportunities in here to kind of get back into that tempo and that physical component as well, it’s just a lot faster,” Ellis said, “It’s remarkable she is at this point where she is, but I think she’s not—and I think she would agree—I don’t think she’s back to where she wants to be in terms of being a prolific goal scorer.”

Who is back up to international fitness and arguably the best fitness of her life is Megan Rapinoe, who is currently on a tear for the Seattle Reign, earning her two Player of the Weeks honors and the title of July Player of the Month after her performance against Sky Blue over the weekend. Watching Rapinoe play for the Reign, it’s hard to believe that, less than five months ago, she was left off the SheBelieves Cup roster in order for her to continue recovering and building up her fitness following her ACL tear in December 2015.

“I think it’s a whole ‘nother level she’s found in terms of just how hard—I mean, she’s always worked very, very hard—but I think there’s been an extra incentive. I know she’s very passionate playing for the Reign. She enjoys that environment and the people around her, so I think it’s just been a really good combination of the environment she’s been in and her own push and drive and mentality.

“Did I think she’d get back here? Yeah, it was always my hope. I think unfortunately when you’ve already been through a couple ACLs, it certainly doesn’t get  easier, but I think you understand what it takes….I actually just complimented [her] today. I said, ‘I’m incredibly impressed with how hard you’ve worked and where you’ve gotten to at this point.’ So for us, it’s an amazing bonus now to see her back to where I think we all knew she was, but I think it’s been a long road.”

That long road has brought her and the rest of the USWNT to the Tournament of Nations where they will try to get the better of Australia, Brazil and Japan. The tournament kicks off tonight at CenturyLink in Seattle, a city Ellis said she’s excited for the USWNT to play in again.

“I love it coming here. The players are very comfortable, it’s a great city, it’s a great place to be, the weather’s remarkable right now. It’s just a fitting start to this amazing tournament, and they’re going to see four world-class teams go at it.”