The Lowdown: A look back at the crazy Reign-Sky Blue match

I spent all day Saturday off the grid, signed on to Twitter late night to this tweet.

Clearly, I had missed one of the craziest soccer games ever. So without much of the weekend on which to base a Lowdown, I decided to log my thoughts as I watched the replay of Reign-Sky Blue. These are all written in real time as I watch the match from start to finish but keep in mind I already knew the final result and sequence of goals. Enjoy – and if you only have an hour to spare this week, I’d suggest using it to watch the second half of this game.

10:00 – The teams are still feeling each other out but there is not a lack of attacking soccer early. Sky Blue are lined up in a 3-5-2 with Christie Pearce centering Erica Skroski and Nikki Stanton on the backline. This could be partly because Christy Holly knows he likely won’t have Kelley O’Hara for the August 4 match against the Spirit. O’Hara the midfielder though, is been the focal point of just about everything Sky Blue is doing offensively, which is not all that much different than the last several weeks when she has lined up at right back. The Reign have worked their way into Sky Blue’s back line a few times but Pearce is on her game early. As a side note, the action is being called by Michael Minnich who was the voice of the Washington Spirit for four years and is a positive addition to any WoSo match.

12:59 – Maya Hayes gets a chance for Sky Blue. Working with Sam Kerr, the former 1st round pick get space when Kristen McNabb and Rumi Utsugi collide and has a chance to at least test Reign keeper Haley Kopmeyer. But Hayes puts the chip shot over the top giving Kopmeyer and the Reign a goal kick.

15:14 – Another chance for Sky Blue, this one in transition. Daphne Corboz orchestrates and sets up Sam Kerr, who fires a shot that Kopmeyer dives to knock out of play for a corner kick. 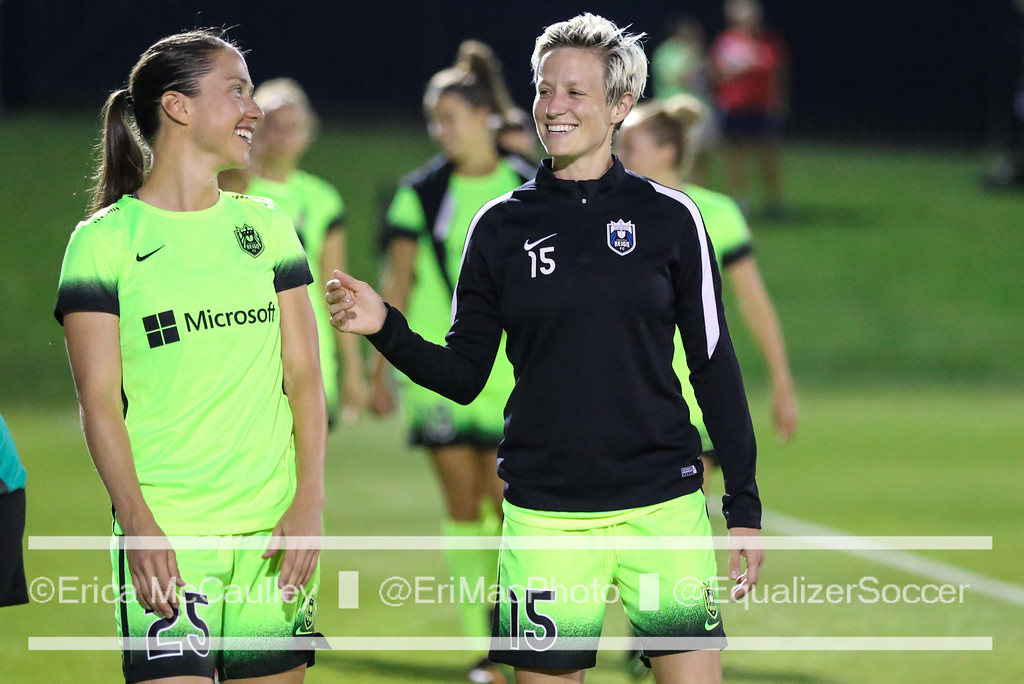 22:51 – Kailen Sheridan catches Nahomi Kawasumi’s errant chip/cross to thwart an attack that began when Raquel Rodriguez gave the ball away to Kawasumi in a bad spot. The key to the sequence is that following the giveaway, Pearce steps to Kawasumi forcing her to play the ball quicker and preventing the Reign from stretching out Sky Blue’s defense more than it already is after a poor turnover.

24:45 – The Reign get out in transition and Lindsay Elston plays Kawasumi, who sends a far-post cross intended for Megan Rapinoe. Sheridan reads it well and comes out to intercept the pass, smothering it to prevent any further attacking play by Seattle. Just before, Sky Blue nearly had a chance following an Utsugi giveaway.

26:21 – After Nikki Stanton got a bit too aggressive challenging Kawasumi, the Reign found Rapinoe and Christine Nairn standing over a free kick. The faded American football lines on the Memorial Stadium pitch tell us the ball is about 29 yards off the goal line. After some deliberation, Rapinoe steps into the dead ball and cracks it into the upper 90, beating Sheridan to the keeper’s right. The Reign have a 1-0 lead at the end of a sequence in which they did not have a touch inside the 18-yard box.

Three side notes here. One is that Sheridan was cheating slightly to her left just before Rapinoe took the shot, possibly preventing her from making a highlight-reel save instead of giving up a highlight-reel goal. Second, this is an excellent piece of officiating by referee Greg Dopka, who held his whistle after the foul on Kawasumi to make sure the foul was the better course of action than letting the attack develop. Finally, Rapinoe’s 10th goal tied her with Sky Blue’s Kerr or the league lead and made her the second Reign player after Kim Little (who did it twice) to reach double digit goals for a season.

29:22 – Merritt Mathias is shown a yellow card for tripping up Kerr on her attempt to cut into the box. The ensuing free kick by Corboz is easily cleared out. Mathias is an aggressive player who will need to be careful playing a full hour on a yellow card.

33:42 – Another chance for the Reign off what appeared to be an innocuous free kick. This time Nairn took it and Rapinoe snuck through to get on the end of it. Only the late arrival of Sheridan forced Rapinoe to pop it up in the air, and her attempt to run it down before it went out of play materialized too late.

HT – The opening stanza ends with Sky Blue being whistled twice for being offside. Sky Blue arguably had the better of the play in the half but trail 1-0 on Rapinoe’s dazzling free kick. It is an open, entertaining match, but there has been little to hint that by night’s end it will turn into one of the top handful of most memorable NWSL matches to date.

46:02 – Rapinoe plays Beverly Yanez into the box where she gets double teamed by Skroski and Stanton and draws a penalty. It looked like Stanton showed up late and took the whistle, which should be particularly galling to Sky Blue since Pearce had dropped and looked to be in position to steer Yanez wide.

46:54 – Sheridan stretches to her right to get a hand on Rapinoe’s penalty, pushing it off the post. But the ball bounces back to the opposite post and goes over the goal line in the process. Rapinoe’s second of the game puts the Reign ahead 2-0 and puts her ahead of Kerr in the golden boot race, 11-10. It is the third consecutive match Sky Blue has trailed 2-0. They rallied for a win and a draw in the two previous.

48:35 – Following a Sky Blue chance in which Hayes could not get off a shot from inside the 6, the second ball off Kopmeyer’s punt is won by Rapinoe. The ball is played wide right to Kawasumi and then to the center. Yanez gets in between Pearce and Skroski and heads it in to make it 3-0. The rout was on.

52:38 – Kerr draws attention to herself and beats Kristen McNabb with a sublime touch to O’Hara in space. O’Hara rips a shot targeted for goal, but Kopmeyer knocks it away.

53:22 Leah Galton replaces Nikki Stanton. Sky Blue are down 3-0, and Galton loves to attack. Stanton, a quality ball winner as a midfielder, had rough night as the left back.

55:12 – The Reign are still attacking and playing some solid, one-touch stuff. Skroski is well positioned to deal with Rapinoe’s cross after Pearce marked Kawasumi out of the play, but the ball hits off her knee for an own goal. For only the third time in their NWSL history, Sky Blue trail 4-0.

Kelley O’Hara was a big part of Sky Blue’s near miracle in Seattle on Saturday. (photo by Lewis Gettier)

59:58 – O’Hara buries a penalty to stunt Reign momentum and make it 4-1. Mathias tripped up Galton at the edge of the area to set it up although it looked to me like the foul happened outside the box.

63:15 – Playing with a 4-1 lead, the Reign defense falls apart. Sky Blue does attack in transition here, but after Meehan’s cross is dummied by Kerr, there are two open Sky Blue players ready to pounce. Pausing the play as O’Hara gets ready to one-time the cross, the right back Mathias is beat having slipped over to help on Kerr. The right center back, McNabb, was also out of position having moved to defend Meehan, while the two left-sided defenders Lauren Barnes and Carson Pickett were caught up field. Kopmeyer makes a save on O’Hara, but the rebound goes right to an unmarked Galton whose easy finish makes it 4-2.

68:40 – Rebekah Stott for Merritt Mathias: Straight change at right back. Mathias was playing on a yellow.

69:40 – Pickett makes an aggressive play to get in the box and sends one across the Sky Blue goal mouth. Kawasumi swoops in and puts it in the net only to see the offside flag go up.

71:12 – Katie Johnson for Lindsay Elston. Johnson has been a fiery presence off the bench in her rookie season.

71:38 – The Reign appear to be in good shape as Sky Blue attack the left flank, but an errant touch by McNabb and some patience by Kerr leaves Corboz with a free chance and she beats a helpless Kopmeyer. It’s 4-3 now and time to start talking about another Sky Blue come back.

75:00 – Corboz gets off a cross and somehow Kerr is able to slip behind Lauren Barnes and make a leaping header to beat Kopmeyer. The game, and the golden boot race, are tied. No NWSL team had ever rallied from three goals down to get level at any point in a match. Sky Blue have now scored four times in 16 minutes to turn a 4-0 deficit into 4-4.

77:24 – Madison Tiernan for Taylor Lytle. Quiet night for Lytle and the final change for Sky Blue.

78:47 – Johnson gets behind the Sky Blue defense on a long free kick by Nairn but Sheridan is able to get to it first, punching it to safety.

79:43 – Rapinoe goes in the book for undercutting former USWNT mate Pearce, who is shaken up on the play but ultimately able to continue.

81:39 – Kiersten Dallstream for Beverly Yanez. Lots of discussion from Yanez on her way out. No more subs for either side.

86:45 – Carson Pickett plays a ball into midfield which is touched down by Johnson and then she and Rapinoe go to work. Johnson quickly lays it off to Rapinoe, who dribbles toward goal and then gives it back to Johnson. Pearce then makes a rare mistake by turning to help on a well-covered Johnson, leaving Rapinoe open for a return pass. An open Rapinoe one-times Johnson’s ball with her left foot and curves it into the upper 90 to complete her hat trick and give the Reign a 5-4 lead in a match that they led 4-0 and conceded the next four. It is Rapinoe’s second NWSL hat trick, joining Nadia Nadim, and her 12th goal of the season put her back on top of the boot race from Kerr.

94:07 – Kawasumi takes the ball into the corner as the Reign milk the final minute of stoppage time.

FT – One of the most remarkable NWSL matches ever comes to a close. The Reign are 5-4 winners and move into 3rd place. Sky Blue drop to 5th and have played more matches than the two teams in their direct line to the playoffs.