Last week, a pair of rookies led the Dash to their second win in a row, setting a club record with a six-game (and counting) undefeated streak. Nichelle Prince scored on one end, Jane Campbell kept the net free of any Boston goals on the other, and (linked by Carli Lloyd in the middle) they jumped Orlando to take sixth place.

I said in my review of the 2017 draft class that rookies take time to judge, and that remains true. Chicago and North Carolina, currently the top two ranked teams, are reaping the benefits of their 2015 draft classes. However, Rose Lavelle’s injury has thrown the door wide open in the 2017 Rookie of the Year race, and they’ve stepped up across the board. Note that for the purposes of this article, I’m discussing draftees and therefore am not including Mallory Pugh, but we’ll come back to her. 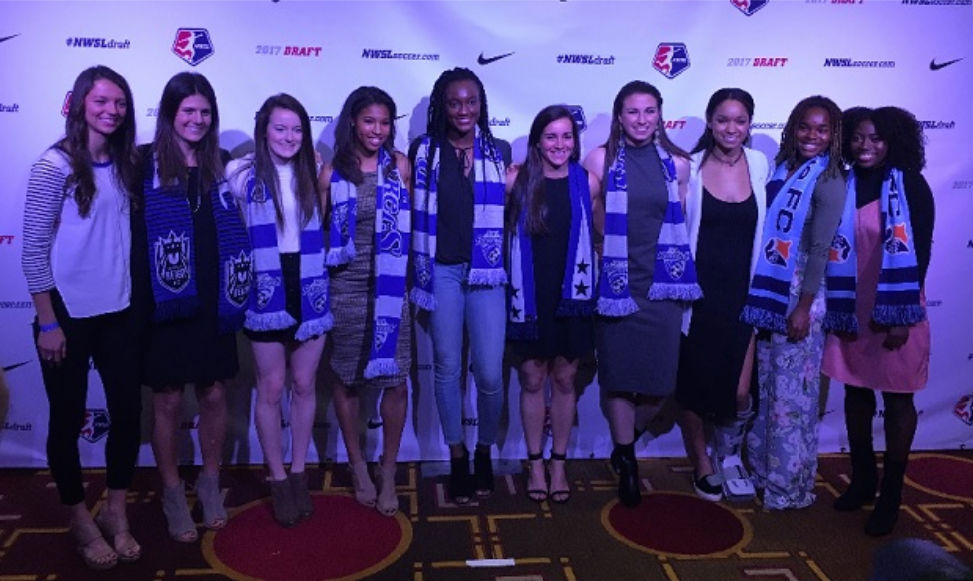 The ten players selected in the first round of the 2017 NWSL College Draft. (photo by Kieran Thievam)

27 – Number of draftees, out of 40, currently on a roster. This does not include Jaycie Johnson or Darian Jenkins, not expected to play this year (although Jenkins is on the 45-day disabled list), nor Savannah Jordan, expected to join Portland.

17 – Number of goals scored by 2017 draftees. This is led by Ashley Hatch with four.

8 – Number of clean sheets recorded by the only three goalkeepers to be drafted: Campbell, Kailen Sheridan, and Sammy Jo Prudhomme.

2 – Number of draftees to appear in every game for their club so far this year: Sheridan and Christina Gibbons.

IN BETWEEN THE POSTS

Kailen Sheridan has played every minute of her rookie season in goal for Sky Blue. (photo copyright Lewis Gettier)

Sheridan arrived at Sky Blue with everyone expecting her to take the starting job, and take it she did, helping keep Sky Blue consistently in the playoff mix. She’s tied for second in the league with saves at 60, but what’s most impressive about Sheridan is her preternatural calmness in goal. Like any keeper, the Canadian has no problem putting her backline in their place, even two-time World Cup winner Christie Pearce, but unlike many other goalkeepers, not to mention rookies, she rarely appears frazzled or beaten. Unfortunately, Sky Blue’s already shaky backline has been pummeled with injuries, and the league-high 28 goals against (so far) may keep her out of the running for year-end awards.

Campbell’s route to the starting spot was slightly different. She began as Lydia Williams’ backup, which made sense given Williams’ prowess and international experience, and was given her first pro match in Seattle (a game she’d probably like to forget but won’t). After one of the worst debuts ever, she promptly returned to the bench. However, when the Dash’s struggles culminated in their sixth straight defeat with a 2-4 loss to Orlando at home, Campbell got another chance. She recorded three saves against Marta and company as the Dash returned the favor by beating the Pride 2-0 in Orlando, and Campbell hasn’t looked back since. Helped by a finally consistent backline, she’s shown off her athleticism and shot stopping skills, as well as her fearlessness off the line, earning a return call up to the USWNT.

In a rather unique situation, Prudhomme doesn’t appear to be Boston’s starter any longer, but during her brief tenure, she set two Boston records. Prudhomme made four appearances while Abby Smith was out with a knee issue, but she only gave up one goal during that time, earning three consecutive clean sheets (the only Breaker ever to do so), and going 316 minutes without a goal allowed, also a Breakers record in the NWSL. That’s right, Prudhomme even beat Alyssa Naeher in the record books. However, she has since returned to the backup spot in lieu of Smith.

Every player wants to be a starter, but there is a value in being a sub. Many remember Kelley O’Hara coming off the bench in the 2015 Women’s World Cup semifinal to score her first international goal and double the U.S. lead over Germany. Katie Johnson and Tyler Lussi both had to learn the hard way that it’s not always easy to transition to a starting role, particularly when playing at a higher level. Johnson has been an absolute firecracker off the bench for Seattle, scoring two goals and proving a menace whenever she steps foot on the field. That is, however, with the exception of her first start, in which she just wasn’t as effective. Lussi, too, was exceptional in her first appearance, coming on in the second half at Houston. Exceptional enough that she earned a start the following week, but she also struggled to make the transition. Margaret Purce is another who has been better as a substitute than a starter, but USWNT head coach Jill Ellis saw enough to call her up. But generally speaking, becoming a consistent starter takes time. 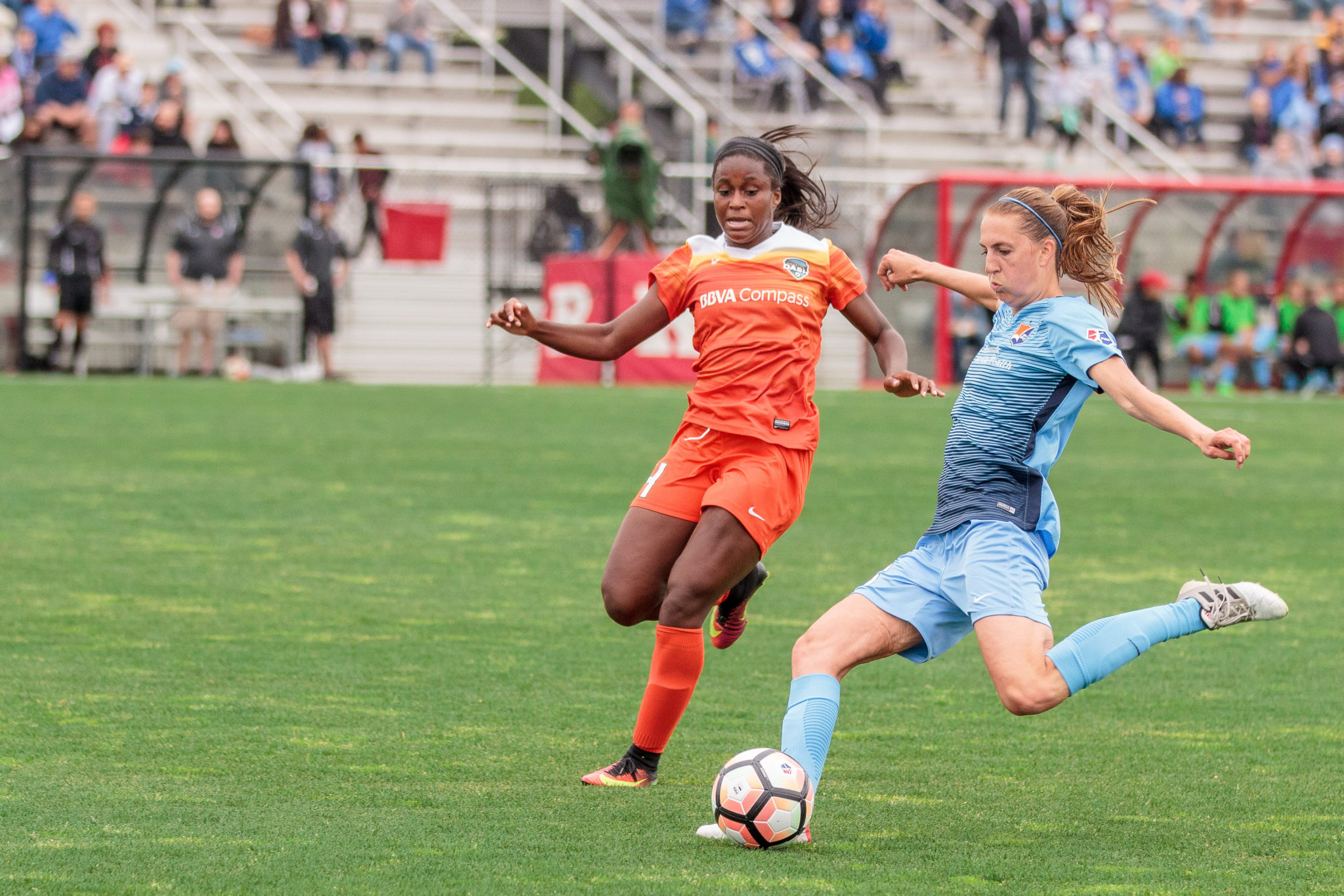 Nichelle Prince, left, has become a game-changing player for the Houston Dash. (photo copyright Katie Cahalin for The Equalizer)

Well, for most. Several players, out of a combination of necessity and skill, have jumped right into the starting lineup. Prince, as mentioned earlier, slowly worked her way into the Dash XI, and interim head coach Omar Morales was saved a hard choice by the unfortunate injury to Kealia Ohai, which opened up a spot for Prince to start just as Carli Lloyd returned to the team. Whoever takes the reins for the Dash next year will have their work cut out for them to decide who gets the nod, as Prince has grown as a player week to week, demonstrating better decision making and an adaptation to the physicality of the NWSL. She has three goals to her name thus far.

Paul Riley didn’t have it quite so easy, although it’s a problem any coach would take. With both Lynn Williams and Jess McDonald out with injury, he turned to Ashley Hatch, who is now his leading scorer. In Courage tradition, she’s already in the top ten in the league for shots taken. Hatch’s pace fits right in with the Courage, so much so that although both are not healthy, only Williams has returned to the starting lineup, leaving one-time NWSL all-time leading goalscorer McDonald on the bench.

Gibbons jumped right in to the left back position for FCKC but was up and down until she moved to central midfield. She’s been better at the spot, but it’s an uphill battle for the team with the worst goal differential in the league. Mandy Freeman would likely still be starting for Sky Blue had she not gotten injured, but the same can’t be said for Kayla Mills, who has started frequently but hasn’t done well. 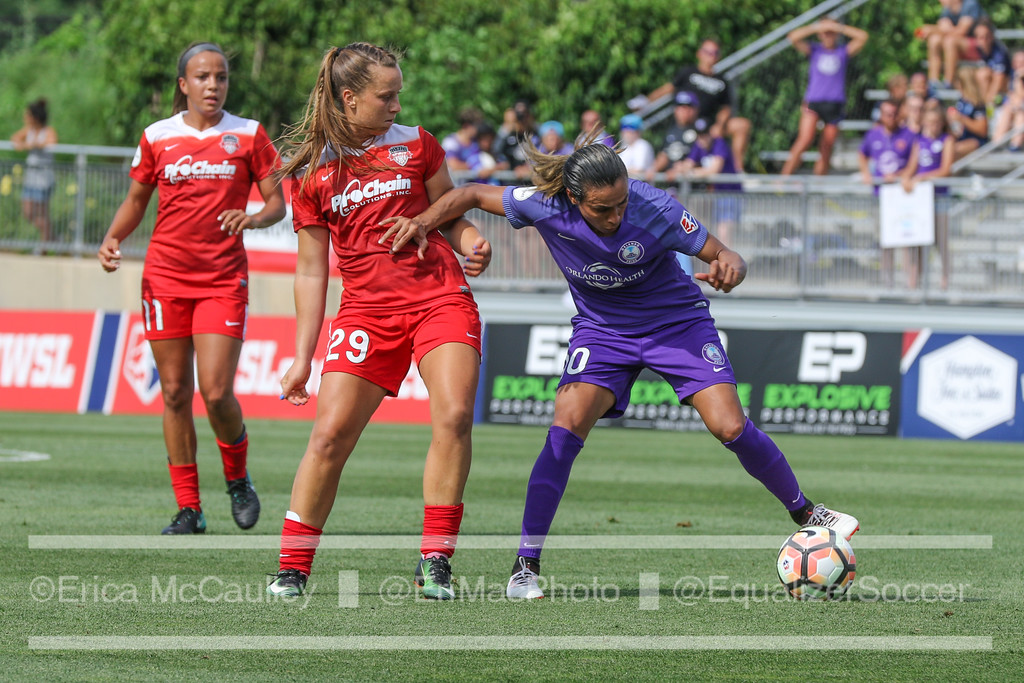 Meggie Dougherty Howard’s rookie season has been somewhat overshadowed by the signing of Mallory Pugh. (photo copyright EriMac Photo for The Equalizer)

For a variety of reasons, there are always players who just go unnoticed. Often it’s the unglamorous nature of their positions or that they’re simply overshadowed by teammates. Kristen McNabb and Meggie Dougherty-Howard are two such players. McNabb is proving to be one of the more successful draft picks in Seattle’s history. She’s been in and out of the starting lineup, scoring one goal as she switched between central defense and midfield. Similarly, Dougherty-Howard has found a home in the center of Washington’s lineup. Her vision and passing ought to anchor the Spirit midfield for years to come. 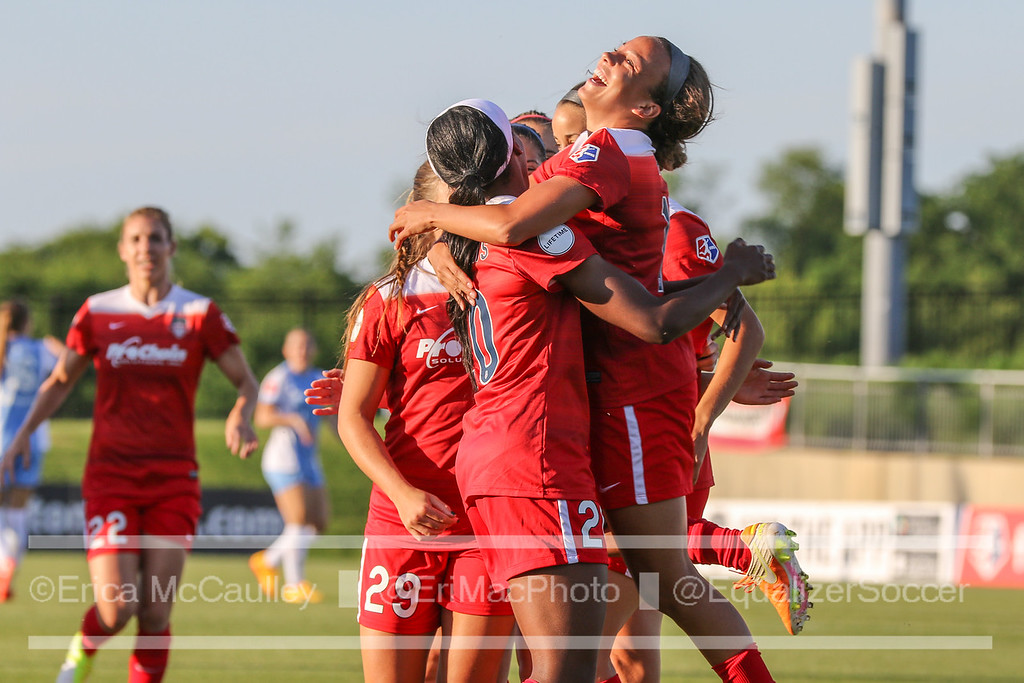 Mallory Pugh has the potential to be the defining player for the Washington Spirit. (photo copyright EriMac Photo for The Equalizer)

I said I’d come back to Pugh, for despite not being drafted, she is still a rookie, and any list of first-time professionals would be remiss without her inclusion. Pugh has scored three goals in seven appearances and shows early signs of a very promising partnership with Estefania Banini (unfortunately currently injured). The Spirit still have some lengths to go to return to last season’s winning ways, but should Pugh stick around, she is undoubtedly and deservedly going to be the player around which the team is rebuilt.

For every rookie I named here, there are two I didn’t. Those may still be finding their spot or team, or maybe they just need more seasoning. If you reread the preseason draft analysis, you’ll likely get as good of a laugh as I did by the picks I’ve already gotten wrong. College to professional is a hard jump, and not everyone can do it. For every Haley Kopmeyer (fourth round pick, now one of the best goalkeepers in the league) or Erin Simon (went undrafted and was signed out of open tryouts), there’s an Erika Tymrak (2013 Rookie of the Year, now struggles for consistent minutes) or a Zakiya Bywaters (first ever NWSL draft pick, waived in 2016). However, we’ll continue to watch them, because despite people like me trying to tell you, you never know who will turn out the next big thing.

Tuesday Roundup: Hat trick lands Rapinoe another Player of the Week honor
The Lowdown: A look back at the crazy Reign-Sky Blue match