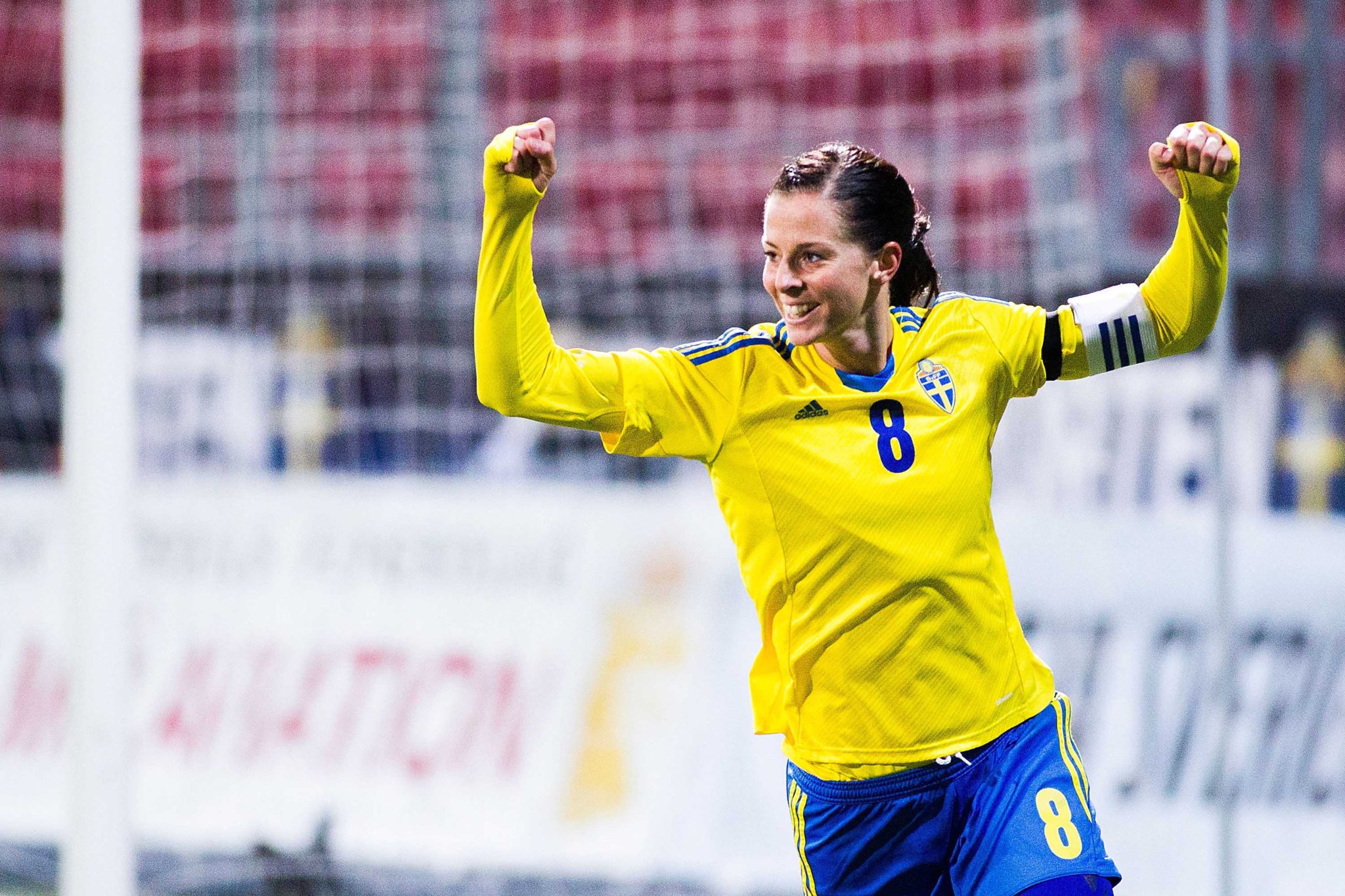 Lotta Schelin converted a penalty kick in Sweden's 3-2 loss to Italy. The result still saw them advance to the Euro 2017 quarterfinals. (photo by Getty Images)

Germany had a pair of disallowed goals but they didn’t need them, downing Russia, 2-0, courtesy of a pair of converted penalties. Sweden, on the other hand, had a much more dramatic trip to the quarterfinals, losing the final game of group play to Italy, 3-2. Italy had previously been eliminated, though, and Sweden advanced thanks to Germany’s defeat of Russia.

Germany’s win of Group B comes as no surprise as the six-time reigning European Champions were an overwhelming favorite going into this year’s tournament, although a rather lackluster opening match against Sweden, in which both teams remained scoreless after 90 minutes, had many people wondering if this was the year they’d finally have their streak broken. They have yet to be thoroughly convincing that they are the team to beat, and today’s match still left much to be desired.

Mandy Islacker came out hot for the Germans, blasting a low shot into the lower corner of the net, but the raised offside flag negated Islacker’s goal. There was little argument in the call, though, as replay showed Islacker well offside on the play. There was slightly more controversy around the second goal called back as Anja Mittag, who headed in a corner kick, appeared to be on. Luckily for the Germans, the non-goal would not affect the outcome of the game.

At the time of the second offside call, Germany was already leading by a goal thanks to Babett Peter, who converted a penalty in the 10th minute. Dzsenifer Marozsan converted a second penalty in the back half of the match to help secure the win. Both penalties were the result of Germans—first Islacker and then Sara Däbritz—being pulled down by their jerseys inside the box.

Jersey pulling and penalty kicks were the theme of the day, as elsewhere in the Netherlands, Stina Blackstenius earned a penalty for Sweden after receiving similar treatment by Italy’s Frederica Di Criscio. Lotta Schelin easily converted the penalty, pulling Sweden back level after going down a goal in just the 4th minute. Italy had taken an early lead when Alia Guagni’s ball in was blocked by Linda Sembrant, only to have the deflection fall to Daniela Sabatino, who only needed one touch to send the ball between Sembrant and goalkeeper Hedvig Lindahl and into goal. What followed was a game of back-and-forth, as Sabatino would strike again in the 35th minute, scoring a double on the day to give Italy a 2-1 lead at the half.

Although her team was struggling against an Italian side that had nothing to lose (Italy was eliminated after losing to Germany), Pia Sundhage made a couple of changes at the half, replacing Kosovare Asllani and Caroline Seger with Lisa Dahlkvist and Fridolina Rolfö. Rolfö immediately made her presence felt, sending in a cross that Blackstenius half-volleyed in to once again level things up less than two minutes into the second half.

In the 85th minute, Italy would retake the lead for the final time. Cristina Girelli switched the field with a ball to Barbara Bonansea before running up and knocking in Bonansea’s cross with the inside of her right foot.

Despite dropping three points to Italy, Sweden’s 1-1-1 group stage record was enough to see them advance as Group B runners-up. They will now face the Netherlands, Group A’s winner, in the quarterfinals. Germany, sitting atop Group B with 7 points, will take on Denmark, who finished second behind the host nation in group play. Both of those quarterfinal matches will be played on Saturday, July 29 and will be streamed live on ESPN3.