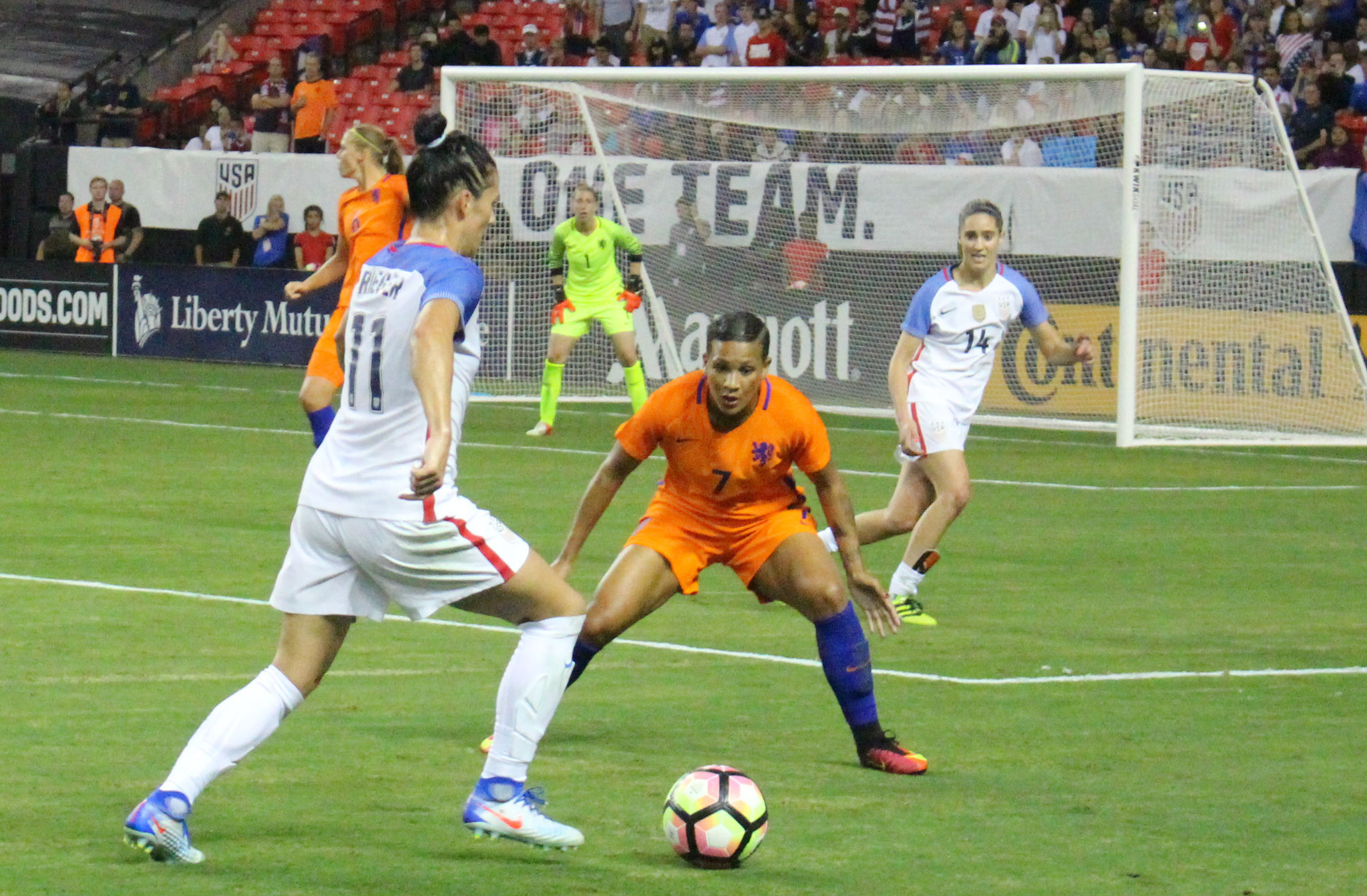 UTRECHT, Netherlands – Equalizer Soccer had an opportunity to sit down with one of the brightest and most colorful footballers at EURO 2017, Shanice van de Sanden. The Netherlands forward scored the first goal at EURO 2017 and did so in her hometown of Utrecht.

The 24-year old has 42 caps and 10 goals for her country. She has been on cloud nine since the tournament kicked off. The Netherlands are hoping they can fulfill many more dreams throughout the EUROs.

The Orange close out Group A play with a match against forever rival Belgium in Tilburg. A Netherlands win or draw will secure top spot in the group. Shanice van de Sanden will be sporting her favorite shade of lipstick and hoping the Netherlands can continue with an undefeated record heading into the quarterfinals.

Harjeet Johal: Could you have dreamed of a better start to the EUROs, with you scoring a goal in the first match?

Shanice van de Sanden: Yeah, it’s a big dream. It’s my city. I’m born in the city, Utrecht. It’s important to win the first game, and I think it’s a dream for everyone. We started really well. We have two games and two wins. We have one game left, and we need one more point to go to the quarterfinals. It’s a really important game as well, and we’re all focused on the next game. We know together it is a really important game.

HJ: Scoring a goal in your hometown, is that something you’ve dreamed of growing up?

SvdS: Yeah, it was a big dream, but I have more dreams for the EURO championship. We have loads of games, four left, and one left before the quarterfinals. We need to focus on that one. My dream is to win four more games.

HJ: What do you think it would feel like to win EURO 2017 as the host country?

SvdS: That would be cool. Everyone dreams about that. We all know, and we all talk about it, that we need to have the focus on the next game. It’s the most important game for now. If you think in the future, it’s okay to think about it, but if you talk about it every day, I think that’s not good. We need to focus on the next game, and if you win that game then you can talk about another game. I think it will be a big dream, and everyone will be crazy if that happens. We need to relax and calm down.

HJ: How do you keep the focus and make sure there isn’t a let down or lost focus?

SvdS: I think it’s not hard to do because we all know and talk about it before the EUROs. You know all the scenarios in your head. I think everyone has really grown up as well to know that we have to focus on every single game. I think everyone knows that.

HJ: Are you starting to see and feel the buzz and excitement around the Netherlands with EURO 2017?

SvdS: Yeah, that’s true. I think before it was never ever, loads of people are waiting for us. When we drive to the stadium, everyone was around the coach (bus). That was really cool, and we will never forget that moment. Everyone had a little bit of tears in their eyes and goosebumps. That was a great moment. It’s cool that everyone knows about us, and everyone talks about us in our country. I think we need that for women’s soccer in Holland.

HJ: What kind of impact can this tournament have for the growth and development of women’s football in the Netherlands?

SvdS: I think it’s important what we are doing now in this tournament. If we play really, really well and we win loads of games, then maybe that will be better. That was the same in England. In England it wasn’t that good. When they were third in the World Cup, everything grew in England. I think that’s really important.

HJ: What do you like about playing in Liverpool in the WSL?

SvdS: I really enjoy being in another country and seeing other things. The league is really, really good. It’s really physical, and we are not that physical. We are really good at playing football, but in England, they are more physical. They spend loads of time in the gym. We are in the gym as well, but they are every day in the gym. They are really physical, and I think that’s really important for the league as well.

I really like Liverpool. I bought a camera, I take loads of pictures of the city and everything. It gives me a little bit of time to relax. I focus on training, and then when I’m done training and the game, I’m a tourist. That’s how it is.

HJ: Do you think one day you could see yourself playing in America in the NWSL?

SvdS: That would be a big dream. I want to play in America. It’s one of my biggest dreams. I will work hard every day and play well, and I will give everything in every game. I will see what happens. Yeah, it is a big dream to play in the U.S.A.

HJ: Where do you see the future with the Netherlands national team?

SvdS: We have a really, really good squad. It’s getting better every year, we know that, but sometimes we don’t really know that. When people say that, we think, “Oh yeah, we are sick” when we see the videos and the goals. We think, “Yeah, we are really good.”

This is typical of Holland. We are not really happy with how we play. In America, people are more positive than here in Holland. I think we need a little bit of positive thoughts.

HJ: Are the Netherlands close to being in that same level as a contender with Germany, France, and England?

SvdS: Yeah, I think so. I think this squad is going to be there, but we need some time. We are getting better. I think everyone sees it. I think we can be as good as they are.

HJ: When did you start wearing lipstick during matches, and how did that all come about?

SvdS: Nothing really…I had loads of hair, and I did it a little bit blonde, so my hair grew. I needed to cut my hair. In that moment, I thought I need some makeup as well. I found my lipstick, and I really like having my lipstick on. I play with it, train with it, and I feel comfortable with it. That’s why I do it. Everyone talks about it, and I like that people talk about it.

HJ: Have you heard any comments from opponents on the pitch?

SvdS: One time we played against Japan, and they saw me in the lineup. We gave a hand, and everyone was laughing about me. That was really funny. It’s something for me. I feel comfortable with it, so people can laugh about it. That’s fine.

HJ: Do you have a go-to lipstick shade?

SvdS: I only have red. Cherry Pea is the name. That is the color, from Maybelline.

HJ: Have you picked up a sponsor for your lipstick?

SvdS: I have a sponsor, but not Maybelline yet. That is what I bought and what I feel comfortable with. I have one sponsor, but that is (with) the lipstick that goes off. The Maybelline stays on, and that’s what I need in the game, otherwise the lipstick is everywhere.

HJ: If the Netherlands win EURO 2017, how amazing would that be?

SvdS: Sick! That’s the only word I can think of. If I think of that moment, that would be sick. I think I will cry, but I don’t want to think about it yet. That’s too far in the future.