Old drive, new spirit putting Lionesses ahead of the pack 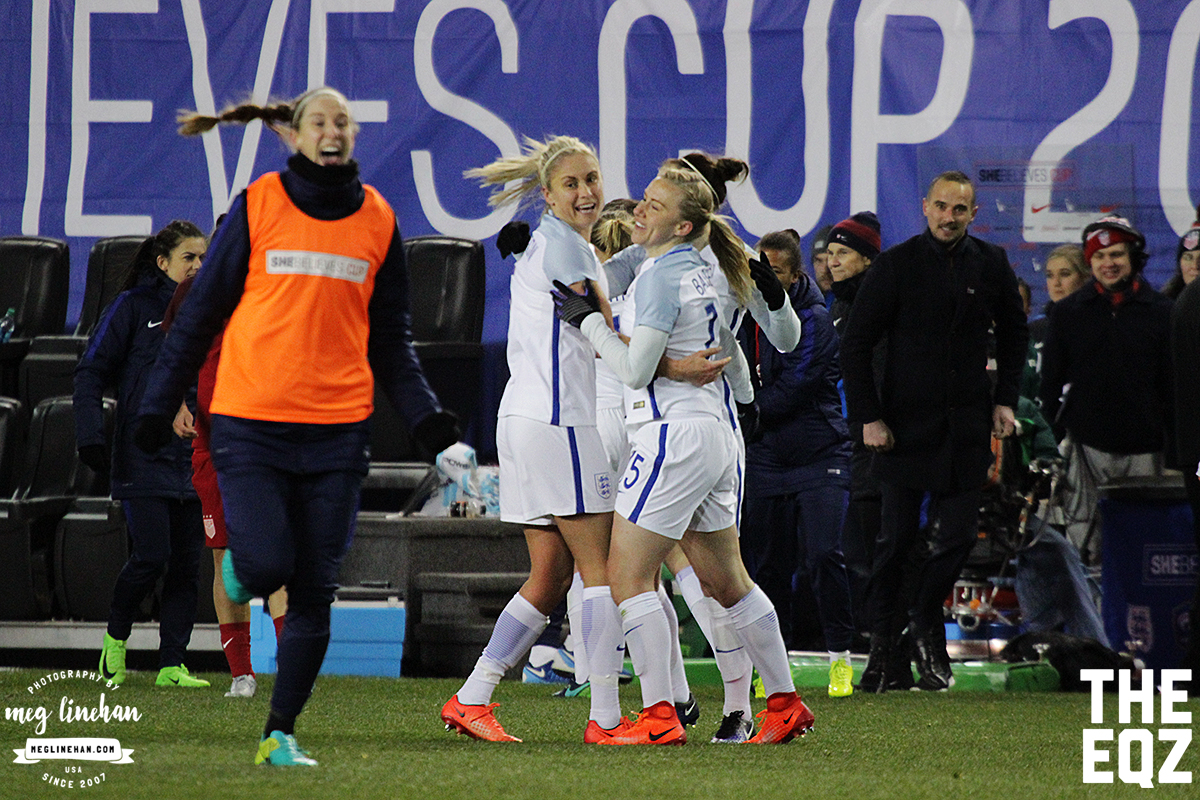 The Lionesses, here celebrating their win over the USWNT during the 2017 SheBelieves Cup, have already left their mark on EURO 2017. (MEG LINEHAN/Equalizer Soccer)

UTRECHT, NETHERLANDS – The opening round of EURO 2017 group stage matches have shown that teams are settling in and looking to find their stride. At least, that’s everyone except for Mark Sampson’s England squad. The Lionesses demolished Scotland 6-0 and looked ever so dangerous whenever they went forward. It’s been a long grind for England after years and years of being bullied by superior opposition class at previous competitions.

Fara Williams knows exactly how far England have come and what it finally means to be a team that can deliver and is as strong as the likes of Germany and France.

“I think 10 or 15 years ago, we were just qualifying for competitions,” said Williams. “The likes of the Germans, Americans, the French, they were just too powerful. The Swedes, Norway, they were too powerful and strong. It showed the gap between us and them many years ago.

“We were getting dominated by teams, five or six-nil. It was very deflating, because we did so hard to qualify for major championships, like Scotland did this time around. It shows the gap between the top four European teams and the rest of the pack.”

England have always had talented players but putting everything together from an organizational stand point to the end product on the pitch, it never fully materialized. You need ample resources from top to bottom, a peak playing environment conducive to winning, and the best of the best when it comes to coaching. Hope Powell had those visions but not enough support behind the scenes. Times have certainly changed now.

“The drive’s been there from the very start,” admitted Williams. “We just haven’t had the resources. In 2005, when I first went to the EUROs, Hope [Powell] wanted, pushed, and tried for so many years for us to be where we are right now, full time professionals at our clubs. Hope put us in a good place, and I think if you speak to most of our senior players, they’ll tell you the knowledge they have of the game is down to what Hope gave us back then. We had the drive back then, but we just wasn’t fit to compete back then. It’s very different, from 2005 to now. I think the realism of it is even more realistic.”

You can see it in the depth on the England bench when the likes of Williams, Karen Carney, Alex Scott, and Toni Duggan don’t make the starting XI. Sampson has an abundance of versatility at his disposal. England can mix and match and play to their opponent’s weakness. Scotland had no answer and looked to be stuck in reverse.

Newly signed FC Barcelona striker Toni Duggan came on and scored the final goal of the match. Her tally was something of a huge weight off her shoulders. Duggan has overcome injuries, and twelve months ago she fell out of selection with England.

“Yeah, obviously I was delighted,” said Duggan of her goal against Scotland. “At the World Cup, I was a bit disappointed not to score. I felt like I had some opportunities, and I played in some big matches. As a striker, you always want to score goals. That’s what most people are judged on. I try to help the team in the best way that I can.

“Coming on last night, it was a big relief to get off the mark. Going back to the SheBelieves Cup, I had chances. I hit the bar, the post. It’s been frustrating for me at the international level so far. To get off the mark here, it’s good for me and good for my confidence.”

You can clearly see that this England team is a different team than the ones we have watched in tournaments gone by. There is a spirit and common bond between the players. They’re playing for each other and supporting everyone’s efforts. There are no slumped shoulders or a ”what if?” or a “wouldn’t it be nice to win?” approach.

Confidence within the Lionesses camp is growing, and that’s something only winning can build. England’s victory over Scotland was the biggest margin in UEFA Women’s Championship history. Winning and winning big only adds to team camaraderie.

“We have really worked hard on being together and what it means about being together,” revealed Williams. “We’ve really put the effort in being a together team. It’s so easy to say, but I think the things you do behind the scenes to make it together, I think it’s shown. You can see in the way we performed, and the way the subs celebrated. We’re determined to win this, and I think the attitude and togetherness is there, and it shows.”

What a way to kick start our tournament, great team display all round.. congrats to bun Hun @Jodes_14 on ur hat trick ⚽️

“I think the thing with Spain,” said Duggan, “They’ve been good over different age groups, and now they’re starting to reap the rewards about it at senior level. They’ve found form over the last few months. We’ve kept a close eye on them. I’m sure analysis girls and boys will have as well. Our game plan, hopefully we can smash that on Sunday. We know they have some key players, some great players. Some of them at Barcelona, some of them at other clubs. We need to nullify their strengths and hopefully play to our strengths.

If it’s anything like the spectacle Scotland was witness to for ninety minutes, Spain could be in for a battering. England have shown that they are the class of EURO 2017. The kettle is on, tactics are spot on, and the roaring Lionesses are ready to win a gold medal.