The Lowdown: “It’s interesting how we evaluate the players” 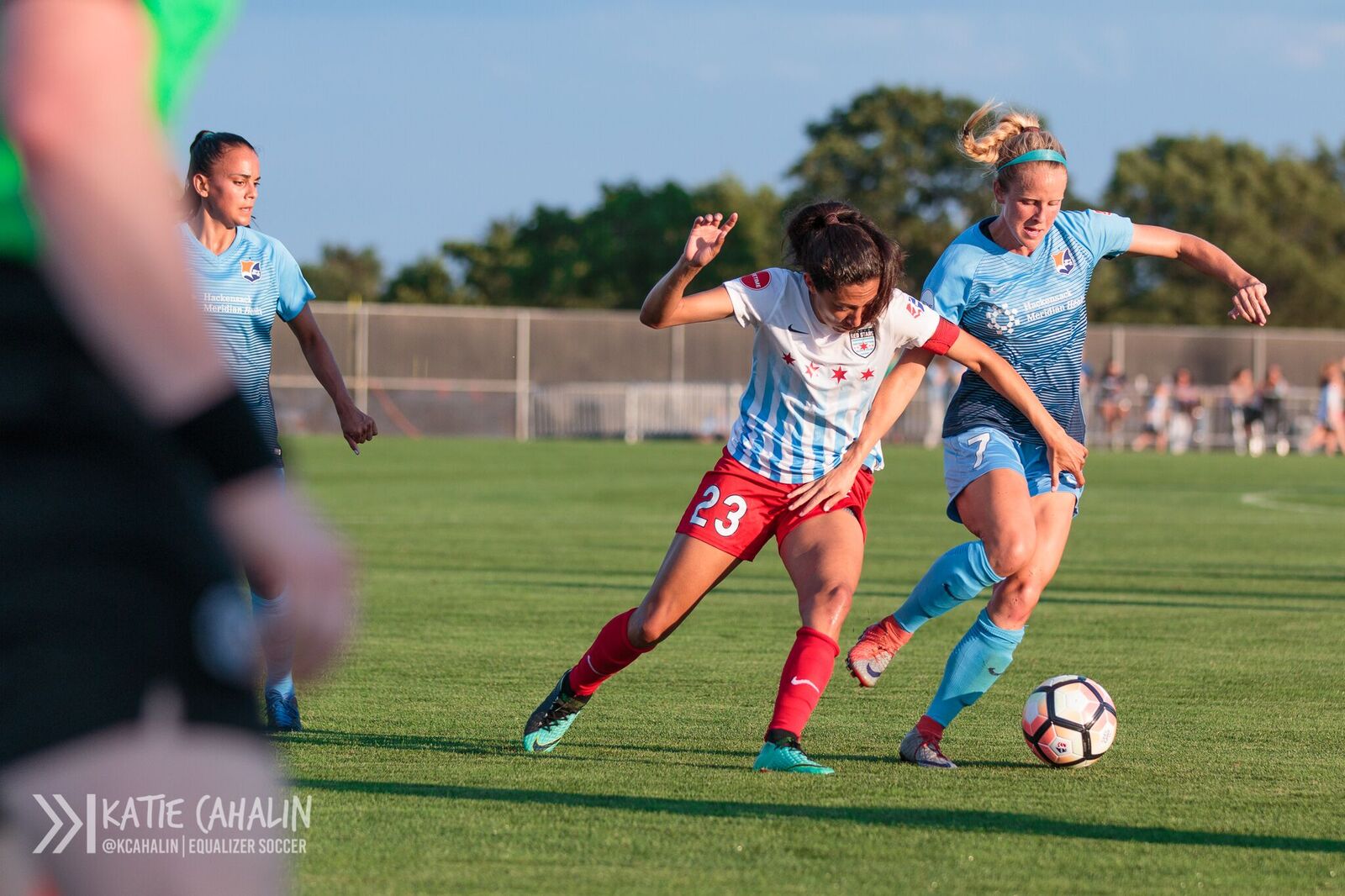 Christen Press, in white, had a goal and and assist on Saturday, but her coach was asked about the chances she missed (photo Katie Cahalin for The Equalizer)

If you cut up the tape of last weekend’s Sky Blue-Chicago Red Stars draw and randomly mixed up the chances in the final third, it would be difficult to arrive at Christen Press as the Woman of the Match. In the first half hour alone she drew and nearly converted a free kick near the 18, created a goal when she won a ball in the final third and found an open teammate, and made a perfect finish to score a goal. In the second half, Press spent nearly as much time in the 18-yard box as Kailen Sheridan, and only a series of quality saves by the rookie Sky Blue keeper kept Press from adding to her goal total and Sky Blue close enough to equalize.

And then there was Sam Kerr. On the week the Red Stars posted and then deleted a video of Kerr that underscored her season and how well the Red Stars had defended her in Chicago, the 23-year old wunderkind was kept relatively quiet throughout. But a 90th-minute ball from Sarah Killion found Kerr’s head and she scored the equalizer. It was the second week in a row Kerr scored in the 90th minute to alter the result of a match.

“I think it’s interesting how we evaluate the players,” Red Stars coach Rory Dames said when fielding a question about what could have been if Press had been more clinical in the second half. “Sam’s an incredible talent and is on a tear, but really we played her two games and we haven’t given up a lot against her. But she scored that goal and that will be the talk of the week, so credit to her. Christen got herself in five or six times, scored a goal, and had a assist on a goal, and the question I get is about the ones she missed.”

In an unorthodox move, Dames and Sky Blue coach Christy Holly spoke to the press together, and Holly quickly jumped in to say, “If she’s scored [six] goals and is having a bad year, that says a lot about her as a player.”

Indeed Press has scored 6 times and handed out 3 assists. She has also combined well with Sofia Huerta, making it difficult to fathom that a little more than a year ago many were wondering if the two could ever play effectively together. But Press has struggled to finish this season, and even though the Red Stars are well positioned for what would be a third consecutive playoff berth, there is growing concern about the team’s inability to put teams away and capitalize on stretches of superior play.

“Do we need to put chances away? Yes,” Dames said. “But I don’t need to tell any of them that.”

Kerr now leads NWSL with 10 goals (Press is 4th after Megan Rapinoe’s 9 and Marta’s 8), and Kim Little’s record of 16 is on notice. One of 11 players to score in all five NWSL seasons, Kerr’s veteran status makes it easy to forget she is only 23. Playing for an extended period in the league for the first time without interruption for injury or international duty (she’ll likely miss Sky Blue’s August 4 match the day after Tournament of Nations concludes), Kerr is finally taking her place among the best players in the world.

“It’s Sam Kerr. If I put it up there, she’s going to get to it,” Killion said of her assist on the equalizer. “My job is to get it from the defense up to her. Once it’s up to her, I know that she’s going to work her magic and do her thing. I just get to sit back and watch it. It’s awesome.” 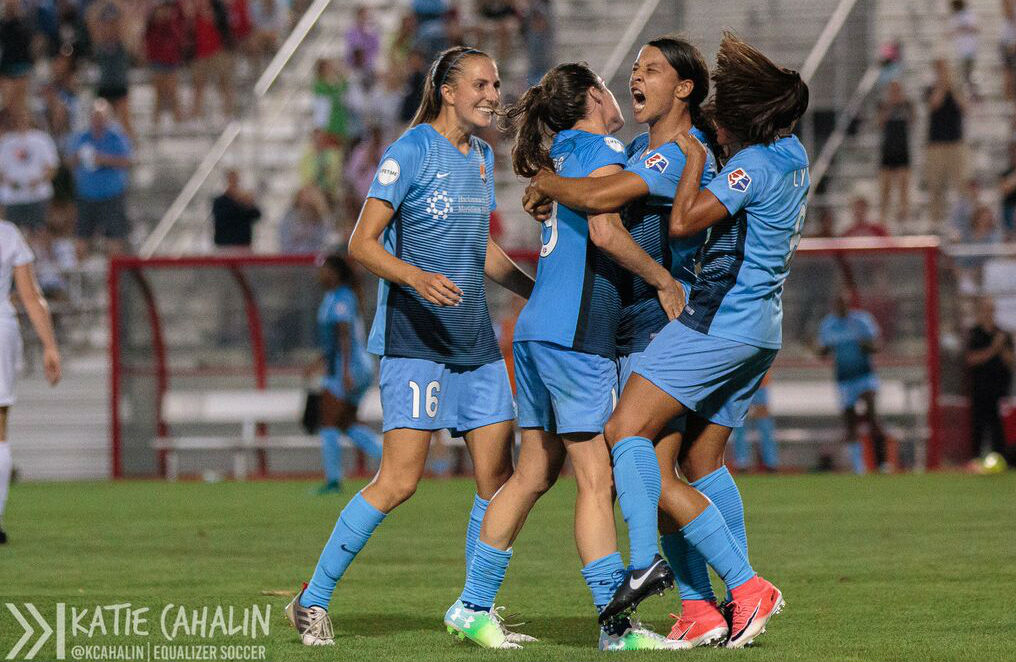 According to Dames, Killion may have been selling herself short for her role in the play. “That’s a phenomenal service. It’s hard for me to get upset with the backs for where the ball got placed. I think we’ll be more disappointed with letting the game still be at 2-1 at that point.”

Subtle acknowledgment that yes, Press—and other Red Stars—need to score more goals, need to finish more chances. To further his point though, in Orlando, Pride coach Tom Sermanni was asked about Marta not scoring a goal on Saturday even though his team routed FC Kansas City, 4-1.

“I don’t care if she scores,” Sermanni said. “She just has to keep playing like that. Again, it’s one of the great things we’ve got on this team now. We’ve got multiple goal scorers. I think we probably now have eight players that have scored goals for us this year. For me it doesn’t matter who’s scoring the goals as long as we are creating the chances, as long as we are getting players in position. If we are scoring two, three, or four goals every week I’ll be quite happy. Whether Marta is supplying the goals or scoring them really is neither here nor there for me.”

As for Press, who it should be noted finished runner-up in Player of the Week voting with Kerr outside the top 3, has certainly struggled to finish this season. Really it traces back to the 2016 semifinal when a chance to put the Red Stars ahead with seconds to play clanged off the crossbar. A year earlier, the Red Stars controlled large pockets of play against FC Kansas City but were ineffective in the final third in a 3-0 loss in a match where the score line was a bit deceptive.

“I’ve said this before,” Dames said. “If I could choose between going her way now and going her way in a month, I’d take a month. I’ve been there two years in a row where we’ve had some chances and they haven’t been put away. At some point she’s going to start scoring. I’m okay with it being later.”

Other thoughts from Week 13

-Chelsey Bush says it all right here, but what in the world has happened to FC Kansas City? This is a team that conceded 3 goals in its first 6 yet all of a sudden gave up 19 over their last 8. During the last two seasons that NWSL played a 20-game schedule, FC Kansas City allowed 20 goals in each season.

-The Dash got away with 3 points even with Carli Lloyd suspended and are in the playoff conversation as they ride a five-match unbeaten streak into Saturday’s match against Boston. I still don’t think they’re good enough to be as consistent as they need to be to make the final push, but it’s nice to see a little life in Houston.

-Sammy Jo Prudhomme’s team-record 3 straight clean sheets and 316 straight scoreless minutes was not enough to keep her in goal on Saturday. Ironically enough, the lone Reign goal came after an error by starter Abby Smith. Prudhomme’s marks stand until she plays again. As a team the Breakers took the shutout minutes mark to 348 before conceding.

-If you didn’t see Marta’s assist to Alanna Kennedy on Saturday, go check it out. I’m not a fan of the short corner kick—and this play probably backs up many of the reasons why—but I guess it works out when you have Marta.

-For all of Sam Kerr’s heroics, you would think Sky Blue have used up their mulligans when it comes to going down 2-0 in the first half. And Kerr’s postgame demeanor on Saturday suggested she was more frustrated with that than she was happy about bagging the equalizer.

-Michaela Hahn (Reign) and Kim DeCesare (Sky Blue) have been waived by their respective clubs to pursue opportunities where they can see more minutes. They have combined for 0 this season.

-For all the talk about NWSL clubs playing their 100th games, let’s not forget that Vlatko Andonovski, Rory Dames, and Laura Harvey all coached their 100th games over the weekend, becoming the first three to reach the milestone. They leave Jim Gabarra behind on 99 since the Spirit have played one less match. Gabarra, though, has been a head coach for every season of WoSoPro. Saturday night will be Gabarra’s 225th regular season match on a WoSoPro sideline (okay 224, he was red carded once and then suspended) which does not include a 23-2-3 run over two W-League seasons with the Freedom. In 10 previous seasons, he has been to the playoffs six times, reaching the final three times, and winning WUSA in 2003.