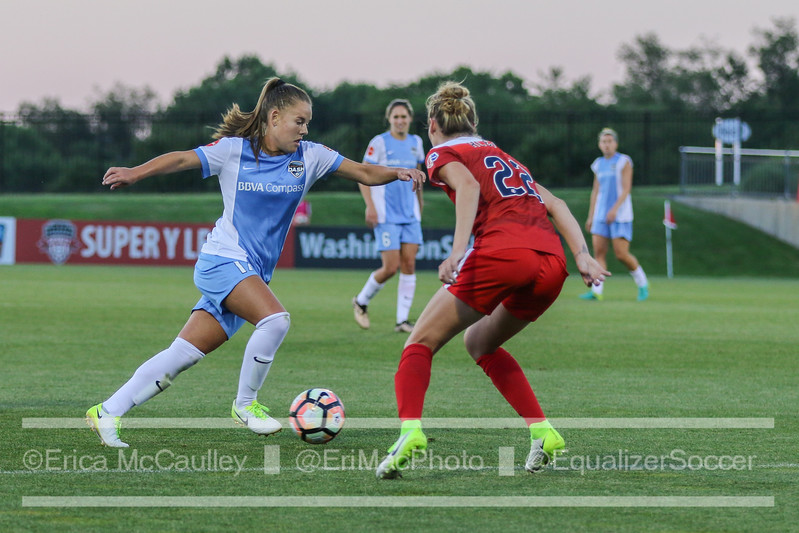 Andressinha was named the NWSL Player of the Week. (photo copyright EriMac Photo for The Equalizer)

The NWSL announced today that Houston Dash midfielder Andressinha has been voted the league’s Week 13 Player of the Week. The award is the result of the Brazilian international’s performance in last Saturday’s 2-1 victory over the Washington Spirit, in which she scored the game-winning goal to extend the Dash’s unbeaten streak to five games.

That goal, the second this season for the midfielder, came in the 53rd minute when Rachel Daly played the ball to Andressinha, who was open at the top of the box. With one touch she chipped the ball just over Spirit keeper Stephanie Labbé’s fingertips for the game winner and Goal of the Week nominee.

#DashOn, Andressinha, to your #NWSL Player of the Week award! pic.twitter.com/709DoQZame

The goal wasn’t the only reason for Andressinha’s win. She was a major contributing factor in the Dash attack and was instrumental in the build up to Poliana’s goal in the first half. Her 83.7% passing accuracy was also second best on the team for those who played the full 90.

So far this season, Andressinha has started in 9 out of 11 appearances for the Dash. She was also recently called up to the Brazilian national team for the USWNT-hosted Tournament of Nations.

Reign FC waive midfielder Michaela Hahn. Thank you @Michaelahahn8 for your dedication. We wish you the best.

The Seattle Reign announced Monday evening that they have waived midfielder Michaela Hahn. The Reign picked Hahn up off waivers in April after she was released by the North Carolina Courage, but she never took the field for Seattle.

“We couldn’t get her the game time we wanted to,” coach Laura Harvey said in the team’s official statement. “We had a conversation about what she wants out of her career. She wants to go and play, and that’s something I can’t offer her right now.”

{ALSO: One goal suffices for France, Austria | The Kronick Report: What a strike! }

Last season Hahn, a rookie out of Florida State, started in eight out of 14 appearances for the Western New York Flash after being selected with the No. 9 overall pick in the 2016 NWSL College Draft. She recorded one goal and one assist during the Flash’s NWSL Championship-winning season.

Denmark’s Janni Arnth out of EUROs with injury

Women’s Soccer Zone’s Katja Kragulend reported on Tuesday that Denmark defender Janni Arnth had suffered a stress fracture in her foot and would be unavailable for the rest of the team’s 2017 European Championship campaign. Arnth started and played the full 90 minutes in Denmark’s 1-0 win over Belgium in their EURO opening match. It is unclear if the defender was injured during that match or at another time.

Because of tournament rules, Denmark will not be able to replace Arnth on their tournament roster and will have to finish the tournament with only 22 players on their squad.