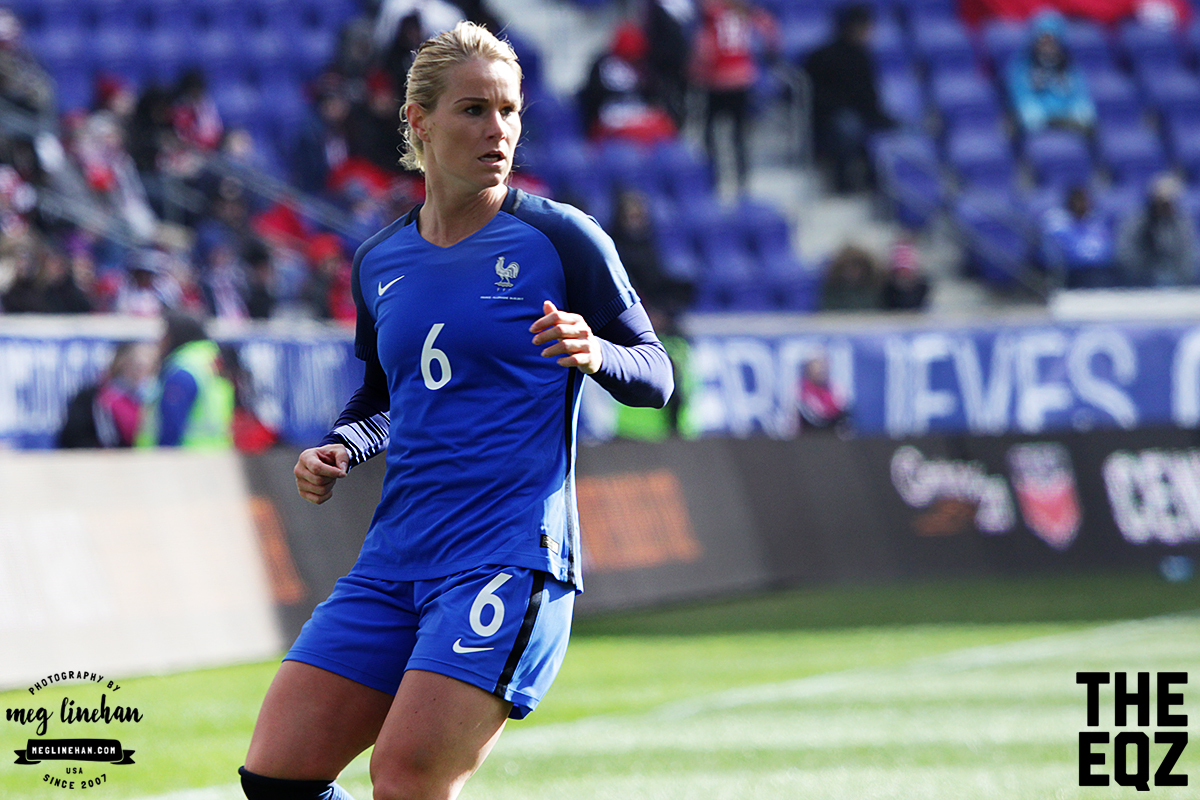 Amandine Henry drew the foul inside the box that resulted in the penalty that lifted France past Iceland. (MEG LINEHAN/Equalizer Soccer)

Watching today’s match between France and Iceland—whether from home or from inside Willem II Stadion in Tilburg, Netherlands—few would have guessed that France was the favorite entering the match. Instead, thunderous echoes of claps and cheers reverberated throughout the stadium as a sea of Icelandic fans clad in blue and red, clearly distinguishable from opposing fans in the same colors, rallied the island nation onward. The energy and excitement from their fans bolstered Iceland for much of the match, but a late penalty kick put the French side up 1-0, and it was too late in the match for the opposing side to find an equalizer.

The result was disappointing for Iceland, who played a tough, physical game and held France scoreless until the 86th minute. It was even more disappointing for the droves of Icelandic fans in attendance since the game was decided on a penalty, one of which was arguably not called in their favor during first-half stoppage time when Laura Georges took down Fanndis Fridriksdottir down in the box. Instead, the referee allowed play to continue, much to the crowd’s displeasure.

The lack of a call in the first half made the call in the second half, in which France were awarded a penalty, controversial despite the foul inside the box being much more blatant. In the 85th minute, Elin Jensen wrapped her arms around Amandine Henry and pulled her down backwards in the box just as the ball was played to her. Eugenie Le Sommer stepped to the spot for France, sending the ball to the right as Gudbjörg Gunnarsdóttir dove to the left. The penalty kick was enough to lift France, who had been dominant everywhere but the scoresheet for the entire match, past Iceland.

Austria are perfect in European competition. That’s a boast they can make for at least a few days after knocking off border rival Switzerland, 1-0, on Tuesday in their first ever trip to the finals of the continental championship. Captain and former Houston Dash striker Nina Burger scored the goal in the 15th minute, and the Austrians survived a late siege from a Swiss team that went down to 10 with a half hour to play.

At the quarter hour, Nicole Billa applied high pressure to Swiss keeper Gaelle Thalmann leading to a turnover on the clearing attempt. Sarah Zadrazil collected it in midfield and eventually made a smooth pass to Burger who found an acre of space inside the Swiss left back spot. She calmly beat Billa for her country’s first ever goal at the EUROs.

Switzerland’s road back became ever more difficult on the hour when Burger was played through and Rahel Kiwic hauled her down from behind. With no other defenders between Burger and the Swiss goal, the card to Kiwic was red. Billa made a save on the free kick and Burger could not react quickly enough to bury the rebound which left the door open for Switzerland. But despite throwing numbers forward and swarming the Austrian goal in the closing minutes—including one ball off an Austrian arm that was either missed or ruled to be ball playing arm—there was no equalizer to be found.

France and Austria will hope to repeat as winners on Saturday, July 22, but only one will be able to as they next face each other in Group C action. The two teams play at 2:45 p.m. ET following Iceland and Switzerland at noon ET. EURO action continues tomorrow as Group D’s teams take the field for the first time. Spain and Portugal play at noon ET with England and Scotland follow at 2:45 p.m. ET.

France: ‘We’ve got the stuff’ to win EURO 2017
Tuesday Roundup: Andressinha named Player of the Week