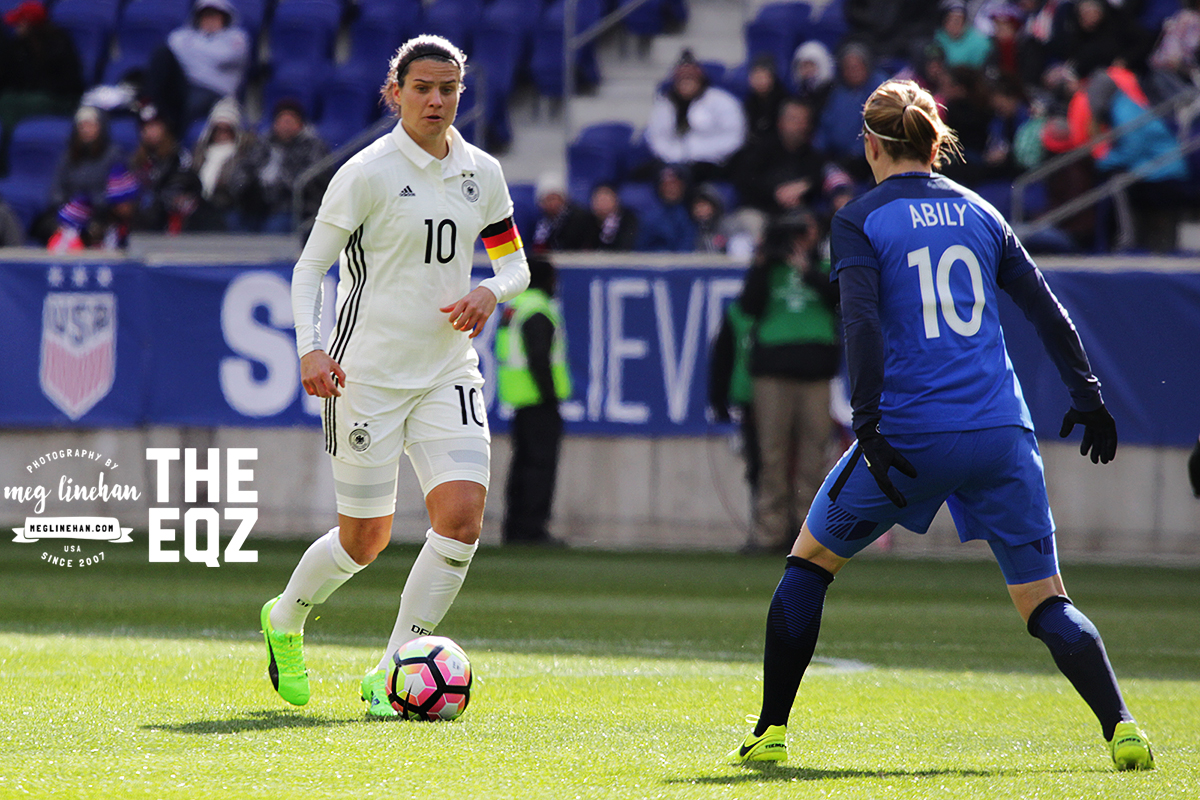 Will Germany repeat as EURO Champions, or could France pull off the upset? (MEG LINEHAN/Equalizer Soccer)

On Sunday, July 16, the European Championship kicks off with 16 teams competing for European women’s soccer crowning glory. Germany have won the last six EUROs in a row and are once again a top contender, but a number of other teams have the potential to unseat them. To help you get ready for all the tournament action, Chelsey Bush and Allison Lee go point-by-point to answer some key questions heading into the tournament.

What are you most excited about in regards to this year’s EUROs?

Chelsey: The fact that ESPN is broadcasting the games is huge. Even when the US was in the Algarve, it was so hard to watch games. It’s difficult to catch international matches that don’t involve the US, and I think it’s fantastic that ESPN has taken this step to open women’s soccer to a larger audience.

Allison: I’m just excited there’s going to be some high-quality, competitive international women’s soccer to watch this summer. It may be an off year for the USWNT, but that doesn’t mean it’s an off year for everyone else in the world. Some of the best teams in the world are in Europe, and tournaments like this one can produce those same Cinderella stories (see Iceland in last year’s men’s EUROs) or compelling storylines that you would expect from a World Cup or Olympics.

There’s always one group that is labeled the “Group of Death” in any major tournament. Which group is this year’s “Group of Death,” and why is that such a tough group?

Allison: Group B is hands down the Group of Death. It’s got the six-time reigning EURO Champions Germany, coming off their 2016 Olympic gold medal win, and the reigning Olympic silver medalists Sweden both in it. Unless something really dramatic happens in the group stage, those two are locks to advance to the elimination stage. Italy and Russia are going to have to pull off some miraculous feats if they want to progress out of the group stage.

Chelsey: It would take a huge upset for Italy or Russia to advance. In a different way of speaking, another group to keep an eye on is Group A [Netherlands, Norway, Denmark, Belgium]. While all the other groups have a clear winner and/or runner-up, the teams in Group A are really well matched, and I feel like all of them stand as good a chance of advancing as the others.

There are seven players from the NWSL playing in this year’s tournament. Which NWSL player has the potential to make the biggest impact for her nation in the EUROs?

Chelsey: I would say Emilie Haavi. Norway is definitely a team to watch after falling just short in 2013, and she’s earned a bigger role on the team since then. We haven’t seen much of her with Boston just yet, but recently she was very impressive against the U.S. in their friendly in Norway. She has pace and does well out wide.

Allison: Haavi really impressed me with how well she played against the U.S. last month, but I’m going to go with Nadia Nadim. She’s been dealing with an injury some this season, but when healthy, she can be a thorn (pun intended) in the opponent’s side, which Denmark will need. They’re also in Group A (along with Norway), so her performance could be pivotal in seeing them advance from a group that, as Chelsey said, seems more evenly matched than others.

Several teams will be without some of their starters. Which team’s roster has taken the biggest blow going into the tournament?

Allison: This is the first major tournament that Scotland has ever qualified for, which is an accomplishment to be proud of, but then they lost Kim Little to an ACL injury. She may only be one player, but she’s arguably the best player on the Scottish roster, and the team will be severely missing her come opening day. They also have some players who are carrying minor injuries into the tournament with them (such as the Seattle Reign’s Rachel Corsie), which is going to put them at even more of a disadvantage.

Chelsey: Little is probably the biggest single loss to any team in the tournament. She is a game changer and someone Scotland really needed in order to get out of the group stage. I would also say that Germany has had several injuries, Alexandra Popp in particular. Her prowess in the air, goal scoring ability, and creativity will be missed.

There were a few big omissions from rosters. Who was the most surprising exclusion for you?

Chelsey: First one that comes to mind is Rachel Daly. She’s proven her versatility on both the international and club stages, and on a 23-person roster, you can afford to carry a few players in order to prepare them for the big international tournaments. This would have been a great opportunity for her to get ready for 2019, and I think that she’ll become a fixture for England in the future. I was also disappointed to see Pauline Bremer not get named for Germany. She’s really turned into a solid defender, and a goal-scoring one at that.

Allison: It’s easy to forget about Daly’s omission because of how early Mark Sampson announced his squad, but she was definitely a shock for me as well. England’s loss is the Houston Dash’s gain though, and they definitely need her with Kealia Ohai being out for the rest of the NWSL season. Another big EURO omission was Vero Boquete. She’s been a big time player for Spain in past tournaments and was part of the Algarve Cup-winning squad, although she didn’t see much time during that tournament. That probably should have lessened the surprise when she was left off their roster, but it didn’t for many.

Which team(s) do you think could be a potential dark horse and surprise everyone?

Allison: I don’t think Norway would be too surprising, but I do think they could pull off some upsets and go further than some people expect them to. Haavi and Elise Thorsnes really connected to create multiple opportunities when Norway hosted the USWNT, and that partnership combined with Ada Hegerberg’s ability to finish could be deadly. They also have Maren Mjelde, who I think is not as well known in the U.S. as she should be. Maybe this could be the tournament to change that. Personally, I would also love to see Iceland take the tournament by storm, much the same way their men’s team did last year. The way their country supports that team, it’d be fun to watch them go far.

Chelsey: Two picks here to go deep – Spain and host The Netherlands. Spain won their qualifying tournament without a loss, and as you noted already, also won the Algarve. I think part of the reason for Boquete’s puzzling omission was a desire to shift to a different style, and it could really pay off for them. The Netherlands, on top of having the home field advantage, also has some really bright young attacking players like Vivianne Miedema and Lieke Martens who can do some damage. Sari van Veenendaal is also no slouch in goal at all.

Germany will be trying to win their seventh consecutive European Championship and are one of the favorites going into it. Do they once again walk away champions, or will someone else finally break their streak?

Chelsey: You can never count Germany out. Obviously, history is behind them. However, they’ve had some key retirements and injuries, and although they overcame a similar situation in 2013, they’re about as vulnerable as they’ve been in some time. I also have some questions about this squad’s ability to score enough on a big stage. You can’t count France out, especially as they finally demonstrated that oft-mentioned “winning mentality” at the SheBelieves Cup. However, I’m going to buck the trend and go with Norway, your dark horse. I think 2013 still stings and they’re eager to return to their successful roots. Along with the players you mentioned, they have Andrine Hegerberg, who is a force in midfield and has fantastic set piece delivery, and Caroline Graham Hansen, who has been around long enough you forget how young she is. I have to mention Ada Hegerberg again, who will likely spend the next decade battling with Sam Kerr for the title of world’s best striker.

Allison: I think we’re in agreement that it’s going to be one of three teams: Germany, Norway, or France. While Germany likely still has what it takes to win, I don’t think they’re going to, and honestly, it’d be nice to see someone else lift the trophy for a change. Call me crazy, but I’m going to go with France. They’re on a bit of an upswing coming off of their SheBelieves Cup win, especially that 3-0 thrashing of the U.S., and I think that could be just enough to help them do what some may deem the impossible and dethrone the Germans. They have one of the best defenders in the world in Wendie Renard, Amandine Henry is electric in the midfield, and Eugenie Le Sommer can seemingly create something out of nothing. The biggest question mark is goalkeeper Sarah Bouhaddi, who has moments of brilliance in every game but at least one epic mistake. If they can somehow keep her from going “full Bouhaddi,” France could win it all.

The 2017 European Championships kick off on Sunday, July 16 with tournament hosts The Netherlands facing Norway at 12 p.m. ET. All matches through the semifinals will be streamed live on ESPN3, and the final will be aired live on August 6 on ESPNU. For full tournament coverage, follow The Equalizer on Twitter. All coverage will also be available here.