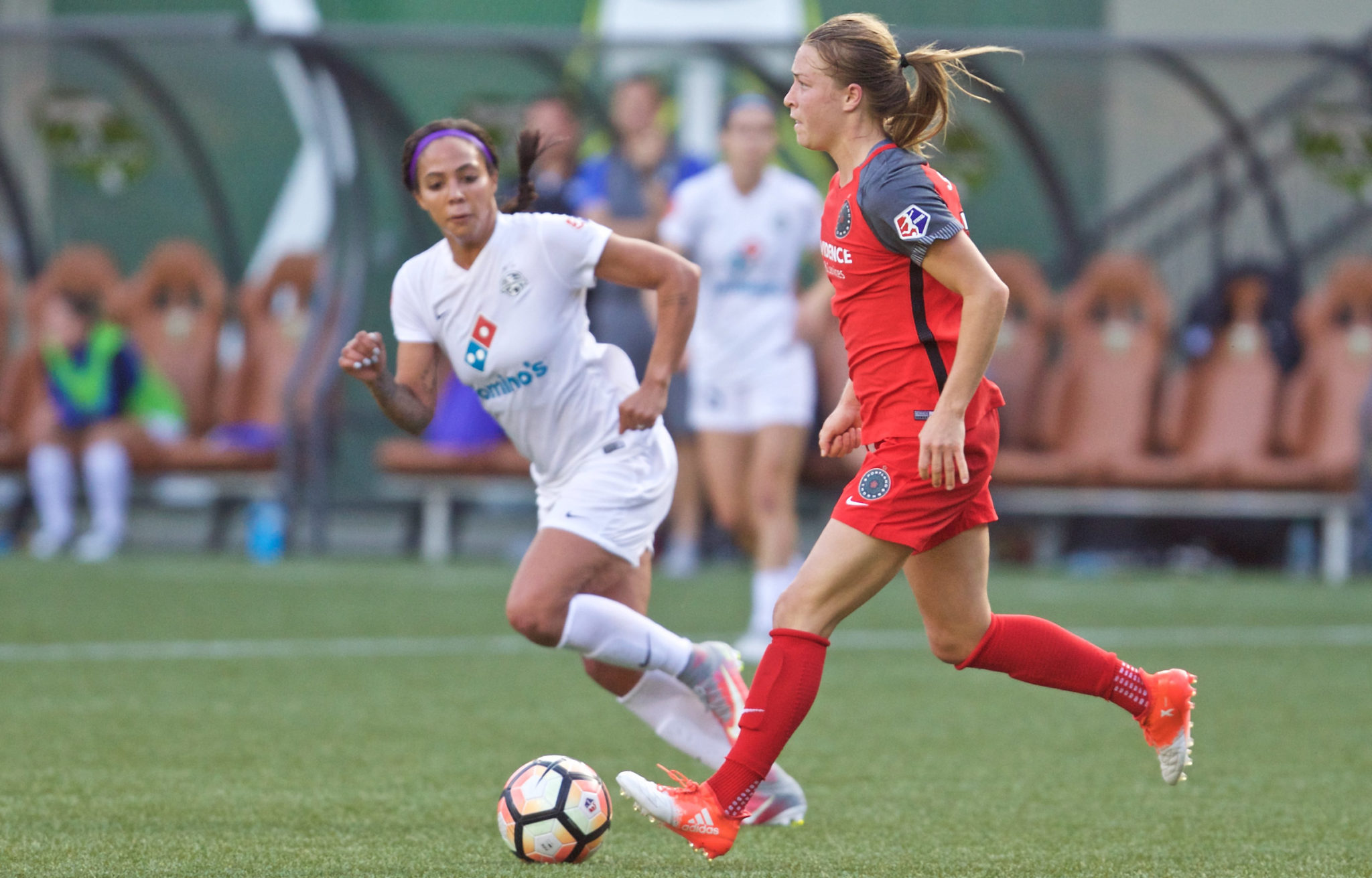 Emily Sonnett and the Portland Thorns are looking to score more goals and win more games as they approach the second-half of the 2017 NWSL season (photo by Craig Mitchelldyer, courtesy of Portland Thorns FC)

Portland Thorns FC defender Emily Sonnett has been a mainstay in the Thorns backline ever since she was first drafted by Portland as the No. 1 overall pick in the 2016 NWSL College Draft out of the University of Virginia. The Georgia native has played and started in all 13 games for Portland so far this season, logging over 1,100 minutes for a defense that has let in only 12 goals this season (tied for the second best goals against number in the league right now). I talked with Emily Sonnett this week about her time in Portland and all-things NWSL, what it’s been like to play for the USWNT, and most importantly, what she’s watching right now on Netflix!

Hannah Kronick: Let’s jump in. To start off, can you talk about how the season has been going for you guys so far as we’ve reached the halfway point?

Emily Sonnett: Coming off of a pretty successful year last year, winning the Shield and having a key group of starters and returners in general, I think we’ve had an okay start. It’s a great and positive vibe, and we all want to work. But, result-wise, we are figuring it out. And hitting the mid-way point through the season, we are pushing to score more goals and win more games to make the playoffs.

HK: How will you guys take the momentum from last week’s late goal to salvage the tie and continue that on into this week as you face the first-place North Carolina Courage on Saturday? What’s the mindset there?

ES: That game was a gut-buster in a way. A really great goal by Lindsey [Horan] and it gives us momentum going forward. As far as playing the No. 1 team, it’s always a great match up and they’re a quality side. I think that last weekend’s game and getting that tie away will only push us forward as we will get to play in front of our fans, in our stadium, against the number one team.

HK: What it’s like for you to play for the Thorns?

ES: Thinking back to my first year and getting drafted to Portland, I didn’t really know what to expect. Being on the East Coast, obviously soccer is big, but getting over to Portland and being in the Pacific Northwest, it’s incredible to play in front of 18,000 to 20,000 fans, and to be able to represent Portland really is a dream come true. Getting this much fan support and support from the staff through the organization-it’s just a perfect set up and I couldn’t be happier.

HK: Stepping a bit outside of Portland, can you talk about your experience to date with the USWNT?

ES: Of course it’s an honor to even be called into a camp and even a bigger honor to play with some of the best women in the world at what they do. I think, me getting the opportunity to play with these various players, is not only good for my development, but also helps me learn professionalism on and off the field. I think, not taking it for granted because you never know which camp will be your last, but coming from college, and getting some minutes with the national team has been huge for my career, my learning process and my growth. Overall, it’s been fun, and I think a lot of people forget that. Getting to meet the people and all of the traveling has been my favorite part thus far with the national team.

HK: Is there pressure being in the national team pool? And if so, how do you cope with that?

ES: I think in every job, in every workplace, there is pressure to compete and to perform. If anything, it’s good pressure. It’s pushing you to be better, it’s pushing me to really grind down on what I need to be doing better: Is it consistency? Is it technical ability? What is it? It really makes you look at your craft and what you’re doing to then try to make it that much better. To answer the question, yes, there is pressure and I do feel pressure, but the pressure is what makes you. 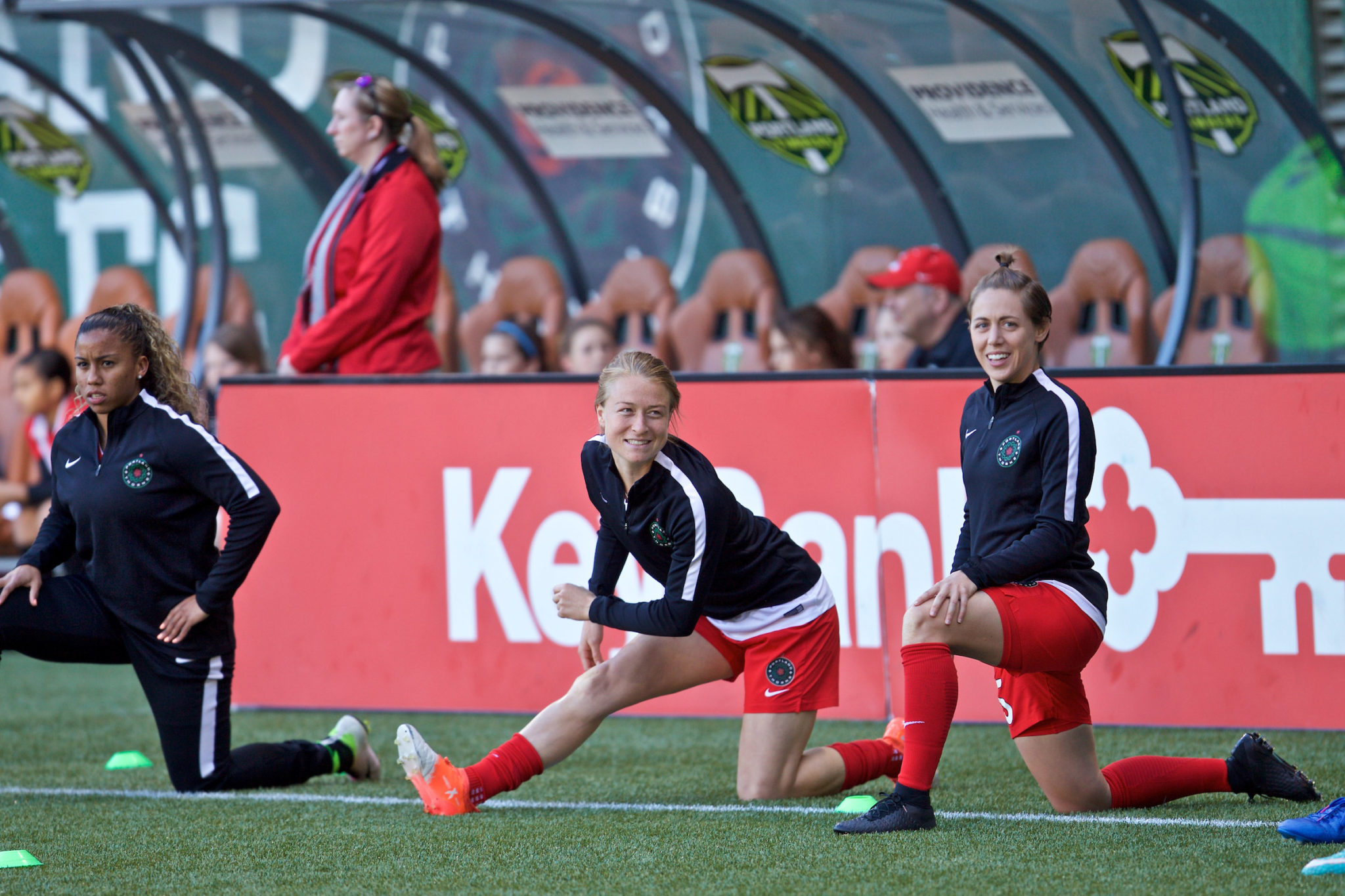 The 23-year old has 12 senior team appearances with the USWNT and was named an alternate to Jill Ellis’ Rio Olympics roster in the summer of 2016. (photo by Craig Mitchelldyer, courtesy Portland Thorns FC)

HK: Taking a step back from life as a pro, what was your biggest challenge as far as transitioning into the league from UVA?

ES: I think the hardest thing to adjust to would absolutely be the traveling. Being in Portland and having to figure out my body and how to recover the quickest is tough. Being on away trips where we are traveling “x” amount of hours longer than most teams getting to the East Coast, that’s just something that I didn’t really deal with in college very often. I think I had one college game cross-country at UCLA to deal with that. Learning from players like Tobin Heath, Christine Sinclair, Allie Long on how they prepare their bodies and the actions they are taking to make them perform at the highest level has been helpful. It sounds very simple, but it’s a huge deal. If your legs hurt, you can’t run and you can’t play soccer!

HK: How would you like to see the league grow in five years?

ES: This being my second year, hearing just the progress that the league has already made, whether that’s a venue change, expansion teams, teams moving into better markets has been great. With U.S. Soccer getting more involved and really asking us questions about how to make the league better is something I’ve seen in just this short amount of time. I think in five years, it would be great to have 12-14 teams, a bigger playoff pool, and an east and west division. I think we are asking the right questions and giving the right answers as players, and the league is definitely headed in the right direction.

HK: So, why soccer? What motivates you to play soccer and to continue to make soccer your career of choice?

ES: Soccer has always been a part of what I do. It provided me a free education at the University of Virginia which I am very thankful for. I think it does open doors, not only through the sport but for other opportunities. I play because of my love for the sport and because I want to perfect my craft to the best of my ability. Do my best and forget the rest is kind of my philosophy.

HK: Who’s inspired you most in your career to date?

ES: Becky Sauerbrunn. I just think it’s cool because it’s someone who went to the same college as me, I watched her play growing up, and then I get the rare opportunity to share a practice field with one of the best and someone I’ve looked up to. I think she’s not only an awesome person, but a phenomenal soccer player to learn from.

HK: When you’re not playing, what are some other things outside of soccer that you’re into?

ES: If we have an off day, I will try to try out a new restaurant since Portland is a foodie area. I follow all those Instagram food accounts, and they’re posting all the good food in your area. I am constantly scrolling through finding new coffee, new ice cream, or a new healthy bowl place. It sounds silly and everyone does it, but also grabbing coffee with friends. But really, finding a new food place, especially in Portland, is something I am really into right now.

HK: And my last question for you today, are you a big Netflix watcher? And if so, what are you watching right now?

ES: Yes! I am re-binge watching One Tree Hill. I always throw on Friends, any season, any time of the day. Friends is always on! And I’m obsessed with Moana and I’ve watched it five times this week!

Emily Sonnett and the Portland Thorns will host the first-place North Carolina Courage on Saturday, July 16, set for a 3:30pm ET kick off on Lifetime.