Washington Spirit and Orlando Pride played to a 2-2 draw at the Maryland Soccerplex Saturday afternoon. Superstar Marta provided the firepower for the Pride while rising star Mallory Pugh provided both goals for the Spirit. 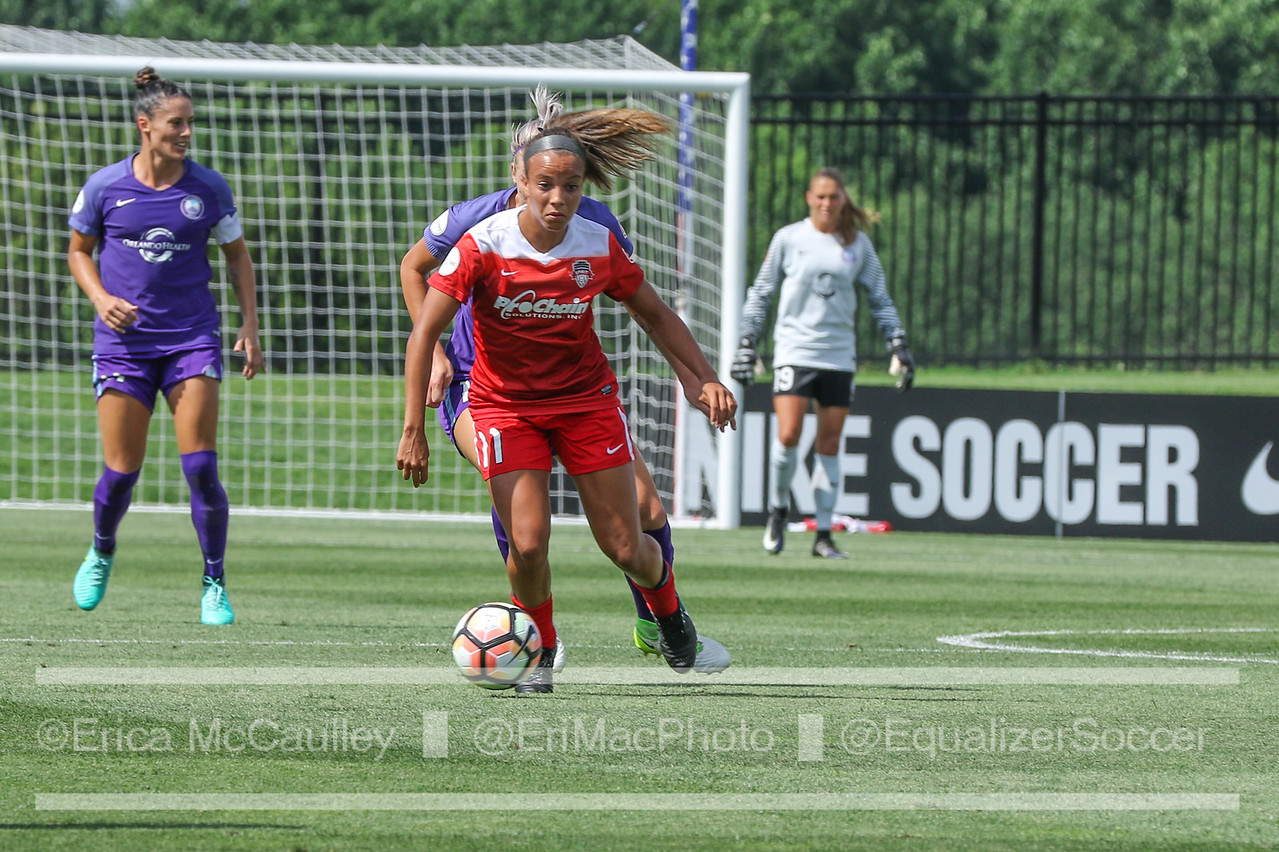 Mallory Pugh surveying options against the Orlando Pride. Her 90th minute PK gave the Spirit a point and Pugh her first NWSL brace (photo copyright EriMac Photo for The Equalizer)

In the leadup to Saturday, this game was often characterized as “Marta vs. Pugh.” Outside of this game, much of the media narrative in the league had centered around these two.  It’s a tough billing even for some as talented as Pugh and it stands to reason why Spirit head coach Jim Gabarra has attempted to play down expectations. Yet, Pugh more than lived up to it last night.

A myriad of words have been written about Pugh so far, most of them far better than anything I can manage but suffice it to say yesterday is worth putting in the memory bank. The 19-year old’s first goal on the day was nothing fancy but she calmly finished it. Players much more seasoned than Pugh often struggle with this aspect of the game, getting too wide-eyed in front of the net.

Perhaps more impressively, with the result hanging in the balance, Pugh stepped to the line and executed an expertly taken penalty kick. The youngest player on the field showed an enormous amount of poise in doing so. While it’s too early to tell what the future holds for Pugh, yesterday she matched Marta and lifted her team to a point after going a goal down twice. Surely, U.S. Soccer fans, who’ve noted a lack of goal scoring prowess by American strikers of late, are hoping yesterday is but a preface of what’s to come.

And while the focus remains on the superstars, it’s often the efforts of those much less noted or praised that are integral to a team. This is especially true for an expansion team where consistency is often lacking.

On an action-packed day in the NWSL, rather quietly a notable streak ended. Spencer, the only player who had appeared in every single Pride match thus far, watched all 90 minutes of yesterday contest from the sidelines for the first time. In her 32 straight games, the Maryland alum managed seven goals and two assists. While not gaudy numbers, they’re certainly respectable.

Postgame Orlando head coach Tom Sermanni said that he intended on using Spencer as a substitute but the game changed and his plan had to change with it.

“She brings a lot to the team,” he said. “I think she was a raw talent last year and was dynamic. I think she’s now added a better level of skill and quality to her game to go with that dynamic impact and you know, she’s starting to score goals regularly.”

For her part, Spencer said little when asked about the streak ending. After admitting it was something she took pride in, she rather fittingly turned the focus back on the team. While the streak has ended, the speedy forward remains an important role player for the team.

The Spirit have had a penchant this season for relinquishing leads late. Last evening, Washington turned that proclivity on its head by scoring an equalizer in the 90th minute. It was the second time on the day the team battled back from a deficit.

While the Spirit still have a long way to go, Saturday shows how far they have come. No longer either completely inept offensively or exceedingly porous defensively, the team has stabilized. In four out of the last five games, the team has managed at least a point.

With the additions of Estefania Banini and Pugh and the team’s shortening injury report, there’s reason to be optimistic about the second half of the Spirit’s 2017 calendar. Suddenly a side that had few options when the season began has almost too many. Going into a month long road stand, it’ll be interesting to see how Gabarra manages his side.

Especially intriguing for the Spirit is how the Banini-Pugh partnership will grow. Last night, the two interchanged quite a bit posing a problem for the Pride backline at times. The chemistry is still a work in process, unsurprisingly as evidenced by a couple of balls played by either that didn’t match runs.

“I love it,” Pugh said postgame of the budding partnership. “Yeah, I think we both kind of get how each other play. I think it’s really fun to play with her. She has that little savvy side to her and we both like to take people one-v-one so it’s nice to have her on this side.”

While a playoff spot is more than likely out of reach for Washington, there’s certainly incentive to watch the current last place team for the rest of this season.