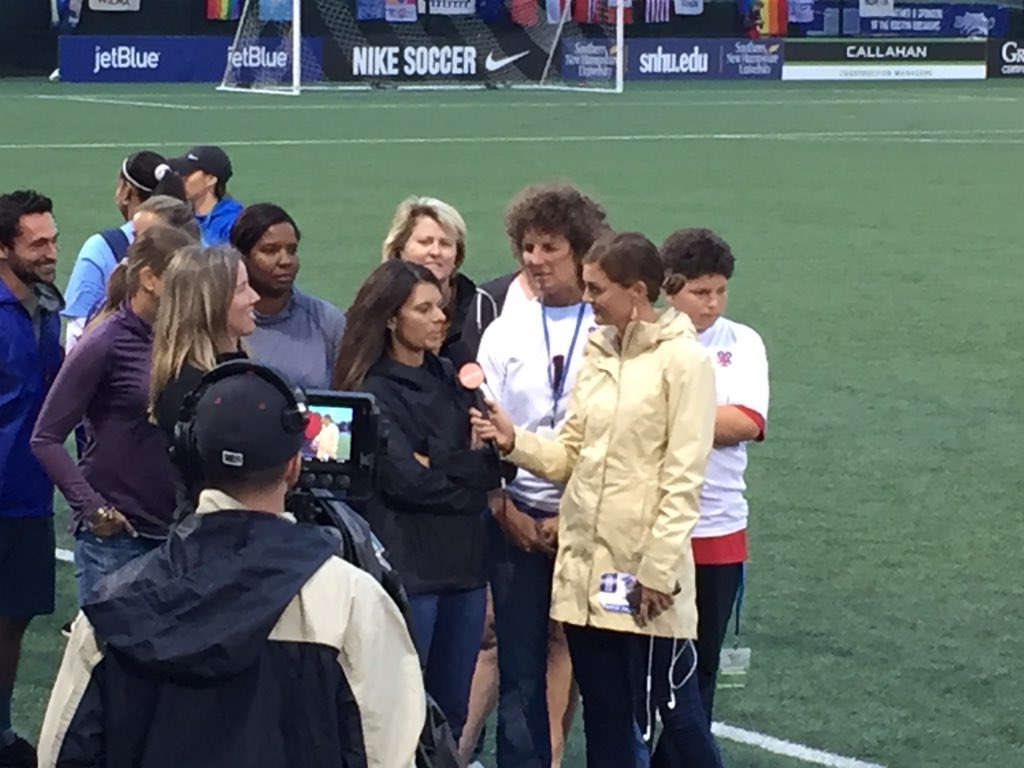 Julie King played in her 100th game as a Boston Breaker on Friday night. Sure you have to open up the annals of WPSL Elite to find all 100, but that hardly makes the accomplishment any less impressive. On the occasion of her milestone, King helped her defense remain in bend-not-break mode in a scrappy, scoreless draw against the Chicago Red Stars.

“One thing for me that stands out that I’ll always remember when I feel like I’m struggling or questioning my confidence,” King said when asked about memories of her 100 game journey, “I remember my first day in Boston. I came to Harvard and didn’t know anybody on the team. Kristine Lilly was standing on the sideline. I was just like, ‘Wow this is amazing, Kristine Lilly is here.’ I literally had a poster on my wall of Kristine Lilly when I was a kid.”

King was pleased to have minimal pomp surrounding her 100th game, if for no other reason than to avoid taking any of the spotlight off Tony DiCicco. Less than two weeks after DiCicco passed, several of his players were at Jordan Field to help honor the man who coached the women’s national team through its most crucial stage. A gold medal in the 1996 Olympics spawned the enormity of the 1999 World Cup, which in turn put women’s soccer on the sporting map for good.

Goal: "To significantly contribute to the growth of soccer in this country." ✅

So proud of you Dad. pic.twitter.com/OiLk5wsNyZ

“Those are literally my idols since I was 10 years old,” King said. “Even though I’m a pro now I still look at those girls and they had such an impact on my career, on my sister, on us growing up. Just knowing that our dream could come true—and it has. It makes me really happy that they’re here tonight. It brings out the 10-year-old kid in me.”

When asked if she had gotten to speak to Mia Hamm, Brandi Chastain, Michelle Akers, or the other “99ers” in attendance, King appeared not to realize they had been watching just off the ad boards on the far left, or that so many of them had made the trip.

“I’m glad I didn’t know they were all here because maybe I would have been a little bit nervous.”

On July 10, 1999, a 9-year old Julie King had a soccer game and had to rely on her mom to record the World Cup final on VHS. “We closed our ears the whole way home. We turned it on right when we got home, probably two or three hours after the game ended. We wanted to be a part of it. To see some of those girls here tonight, it’s just my childhood dreams come true full circle.”

Sammy Jo Prudhomme is a half generation behind King. In her fourth professional appearance, she nailed her third straight clean sheet to become the first Breakers ever to do that in NWSL. Her streak of 316 shutout minutes and counting is also a Breakers’ record.

“As a rookie, it’s just insane to think about that because I’ve played four games and she’s played 100,” Prudhomme said of King. “To see a player like that on your team and knowing that could be something you could do eventually is really encouraging, really uplifting to think you could play the game that you love for so long.”

Rory Dames is in a generation sandwiched somewhere in between Julie King and Tony DiCicco. The first time he had any extended interaction with DiCicco was at the 2013 NWSL draft when he thought they were about to walk past each other only to have DiCicco stop him and say, “Not a bad draft for a youth coach.”

“Then he gave me a great piece of advice,” Dames recalled. “He said that whatever I’ve done to get here, continue on with. The only difference [between youth and pro] is instead of coaching young girls, you’re going to coach women. I was always thankful for that, and I’ve tried to take that advice to heart and use it at this level. He was a pretty successful guy so anything he says is probably a decent idea to follow.”

At halftime, the 99ers and a few of DiCicco’s other players went on the field, waved to the crowd, and gathered around as Jordan Angeli—doubling as a former DiCicco player and sideline reporter for the broadcast—interviewed Akers and Hamm. As individuals, most if not all of the 99ers are understated. As a group they are equally understated and all-consuming. The mere sight of them milling around on the pitch led fans, media, and employees of all generations scrambling for their cameras.

Rory Dames summed it up nicely. “For those players to fly from wherever they were to come in here probably says more about not just how good of a coach [Tony DiCicco] was but the character of the man better than anything I could say.”

When the match was over and a few folks (but no 99ers) spoke about DiCicco during an on-field ceremony, every player and coach from both teams remained to take it all in.

Julie King was one of those players. This is her sixth season as a professional counting WPSL Elite. She has never been on the NWSL’s first or second all-star teams, never been called into a national team camp and likely never will be. And if it had not been her 100th match, her role on the evening probably would have remained entirely in the background.

It was King’s 100th match though, putting her front and center on a night that was akin to a nexus of soccer generations from DiCicco all the way through the kids in the stands young enough that they may have needed Michelle Akers pointed out to them even as her trademark hair made her the easiest person to pick out in all of Jordan Field.

“I know the impact those people had on me,” King said, “and I hope that I can maybe be that person or have the smallest percentage of that happen to a little kid here tonight. That kind of pushes me.”