Also in today’s roundup, Amel Majri ruled out for EUROs, Italy and Portugal release EURO rosters, U.S. U-20 and U-18 teams see action, W-League champs Melbourne City get a new coach, and chants for England and Scotland drop ahead of EUROs. 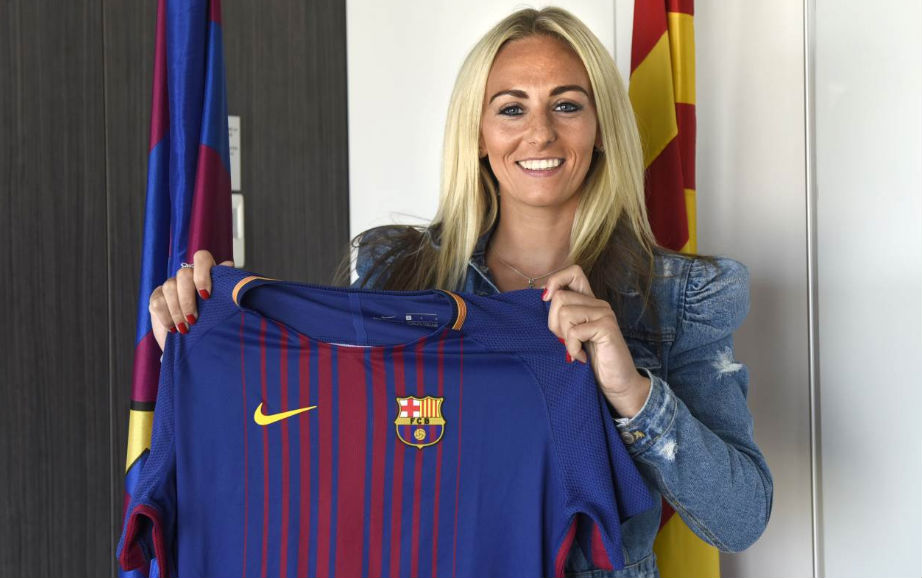 “For me, FC Barcelona is the biggest club in the world, and naturally I wanted to come here and be part of it,” Duggan said in a statement published on Barcelona’s website.

She went on to say that her desire to win a Champions League title also influenced her decision. Duggan won the FA WSL title with Man City this year but fell short of a Champions League trophy after being eliminated in the semifinal round by Olympique Lyonnais via goal differential.

“I have had a lot of success in England, but I want to have even more. I think I need another trophy in my list, and I know that Barça’s ambition is to win the Champions League – this is my goal too,” she said.

Duggan is currently preparing for the 2017 European Championships with England although she did not play in England’s 2-1 win over Denmark on Saturday, July 1. The match was the final friendly for England in preparation for the EUROS.

Amel Majri ruled out for EUROs 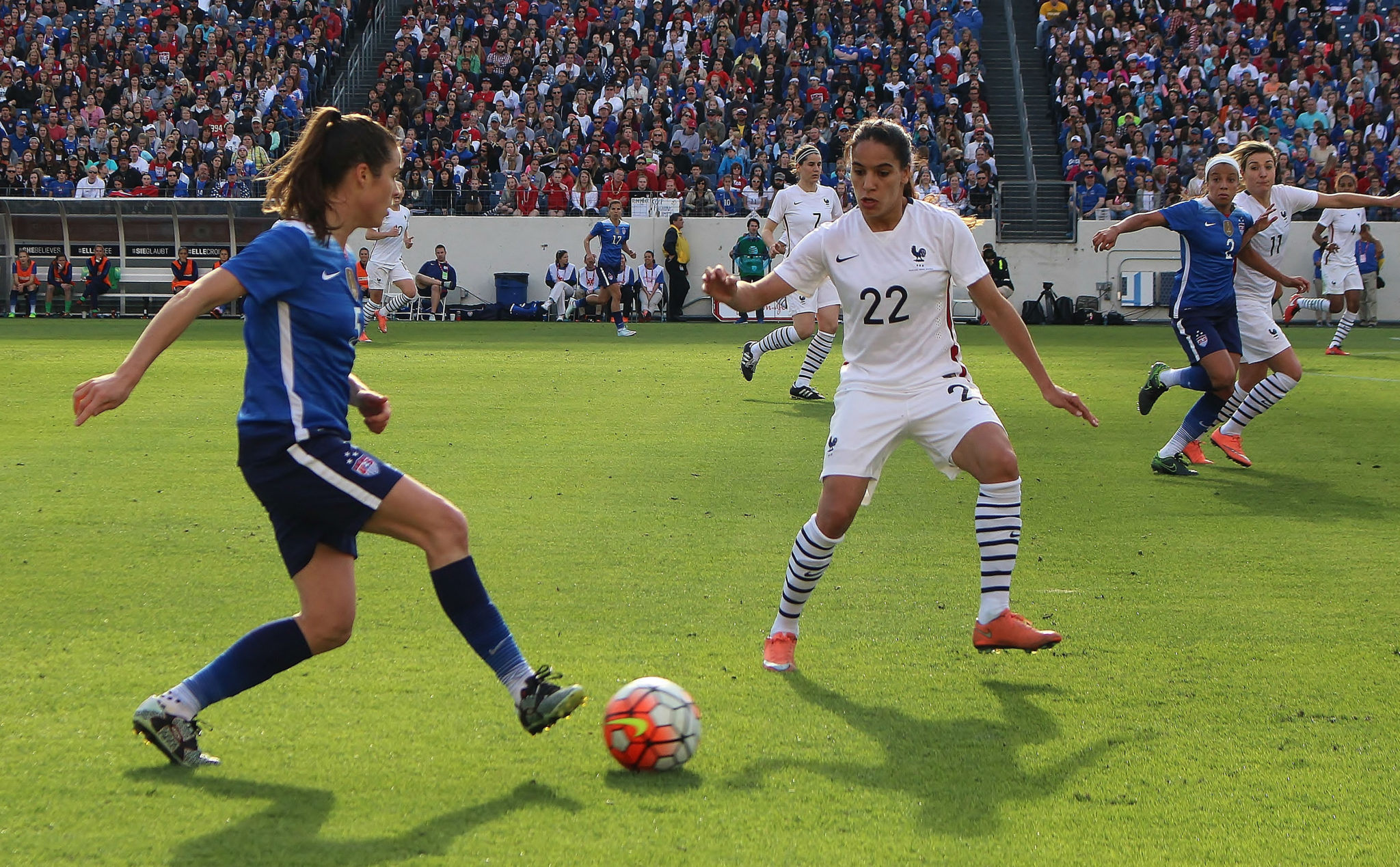 Amel Majri was ruled out of the EUROs after spraining her ankle. (photo by Allison Lee)

If France wants to win the 2017 European Championship, they’ll have to do it without Amel Majri. The versatile player, who was initially named to France’s EURO squad on May 30, sprained her ankle and has been ruled out for the tournament.

Majri made her international debut in 2014 and has since made 32 appearances for her country. She was a part of France’s 2015 World Cup and 2016 Olympic squads and recently helped France defeat the USWNT, 3-0, to win the 2017 SheBelieves Cup.

At the club level, Majri has played for Olympique Lyonnais since 2010, recently repeating as treble winners alongside several of her France WNT teammates and USWNT forward Alex Morgan.

France head coach Olivier Echouafni has tapped Montpellier HSC’s Clarisse Le Bihan to replace Majri on the roster, both for the tournament and the team’s remaining two pre-EURO friendlies.

Italy and Portugal, the last two teams to release their 2017 European Championship rosters, have finally announced their 23-player squads.

Italy, who won the first (although unofficial) EUROs in 1969 but never since, were drawn into arguably the toughest group, Group B, where they will face reigning EURO and Olympic champions Germany, reigning silver medalists Sweden and Russia.

Like Italy, Portugal also has a difficult road ahead of them, as they were drawn into Group D with England, Scotland and Spain. Boston Breakers midfielder Amanda Da Costa was named to the Portuguese squad for the summer tournament and has already reported for national team duty.

The 2017 EUROs kick off on Sunday, July 16. Italy kicks off group play on July 17 against Russia, while Portugal doesn’t play until July 19 when they take on Spain.

The United States U-20 and U-18 women’s national teams are both currently overseas for some friendly competition.

The U-20 team traveled to Europe for a four-game series consisting of two matches each against England and Germany. They first took on England on July 5, beating the British team, 2-1. Civana Kuhlmann converted a penalty kick to move into second place in U-20 goals for the year, and Ashley Sanchez found her way onto the score sheet as well. The U.S. and England will play a rematch on July 7 before the U.S. travels to Germany.

The U-18 team traveled in the opposite direction, heading down to Australia for a training camp, followed by a match against Canada’s U-20 team and a pair of matches against Australia’s U-20 team. The U.S. opened play Down Under with a 4-1 loss to our neighbors from the north on July 6. They will take on the home nation on July 10 and 12 before returning stateside.

Jess Fishlock, 10, served as a player/manager in the second half of Melbourne City’s 2016/2017 Championship-winning season. (photo courtesy Melbourne City Women)

Westfield W-League side Melbourne City announced today that Patrick Kisnorbo, former Socceroo and City A-League side captain, had been promoted to head coach for the 2017/2018 season.

Kisnorbo, who joined the team as an assistant coach in January after Joe Montemurro left City’s women’s side to coach the men’s team, replaces Jess Fishlock at the helm. Fishlock entered the 2016/2017 season with Melbourne City as a player/assistant coach before Montemurro’s departure saw her promoted to player/manager. With Kisnorbo coaching from the sidelines, the pair helped lead the second-year team to a 2-0 win over Perth Glory in the Grand Final, earning City its second consecutive Championship title and making W-League history in the process.

“Coaching at Melbourne City has become a real passion for me and Melbourne City and City Football Group have provided me with some fantastic coaching and development opportunities over the past 18 months,” Kisnorbo said in a statement published on the team’s website. “I’m delighted to be able to work with the women’s team next season and continue to build a sustainable and successful team for the future.”

Vauxhall Motors, sponsor of the national teams of England, Scotland, Wales and Northern Ireland, has released two sets of videos of chants for the English and Scottish squads ahead of the European Championship.

The sing-a-long type videos feature chants for both teams as well as individual players. All 23 members of England’s squad have chants, while 19 of Scotland’s do.

The videos for England’s chants can be found here, while those for Scotland are here.