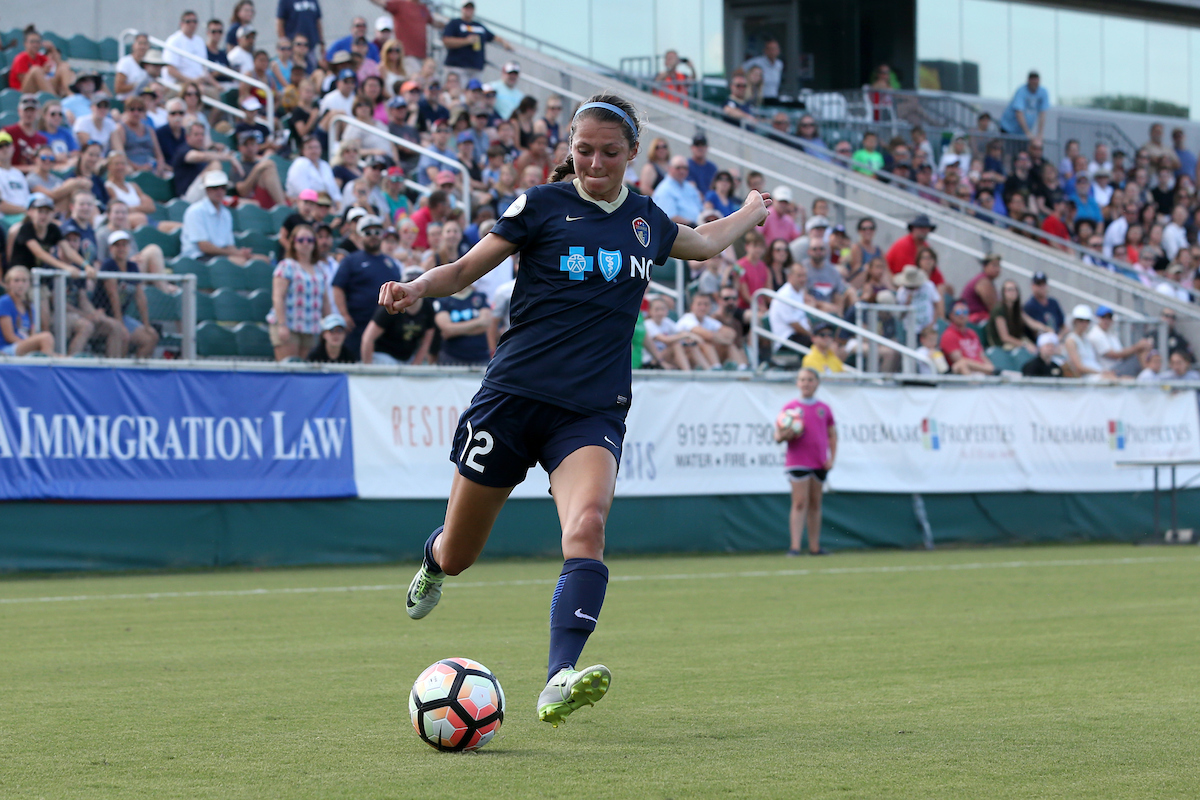 Rookie North Carolina Courage forward Ashley Hatch scored in three straight games for her side as the league approached the halfway mark of the NWSL season. The No.2 overall pick out of BYU in the 2017 NWSL College Draft is coming into her own in her first professional season with three starts and three goals in nine total appearances to date. She’s spent extensive time with the U-23 USWNT and made her senior team debut against Switzerland last October. I chatted with Ashley Hatch this week about her transition from college to pro soccer, what’s its like to play for the Courage, and how her experience with the USWNT has been!

Hannah Kronick: How has the season been going thus far? What is the mindset is on the team right now being where you guys are, sitting in first-place half way through the season?

Ashley Hatch: The season so far has been great. I’ve really enjoyed getting to know all the girls on the team — learning about their stories, how they got to the team, as well as getting to know all the coaches. The season overall is going really well right now, but we know we have lots to improve on still and that’s the exciting part. We are very anxious for every game day and I think it shows in our practices as we are all eager to learn and eager to get better.

HK: Awesome, and how has the season been so far for you personally?

AH: As you know, it’s my rookie season and I didn’t know what to expect coming into it, but I did know that I would learn a lot which has been great so far.

HK: How are you guys preparing for the game against Seattle this weekend?

AH: Yes, we are preparing! Seattle is a very good team and we haven’t played them yet this year, so it will be fun to play a new team and it will definitely test us, but I think when the time comes, we are going to be ready for them.

HK: Stepping back a bit, what has been the biggest change for you this year as you’ve transitioned from college soccer at BYU to professional soccer in the NWSL?

AH: The biggest change, I would say, is getting used to the level of play. I am pretty sure any rookie would tell you that. You have to make quicker decisions and you have to be a little better. I think that’s what I love so much about it because it has pushed me to raise my play up to this level.

HK: From an offensive playing perspective, what’s been the biggest adjustment that you’ve had to make to your game, outside of just raising your overall level of play?

AH: I would say my runs on and off the ball. Especially coming from a college team that played with three up top and with the Courage, we usually play with two up top. Getting used to those runs and getting used to playing with my other forward to read the flow of the game and make runs off of my midfielders. The runs off the ball have been the biggest adjustment for me. 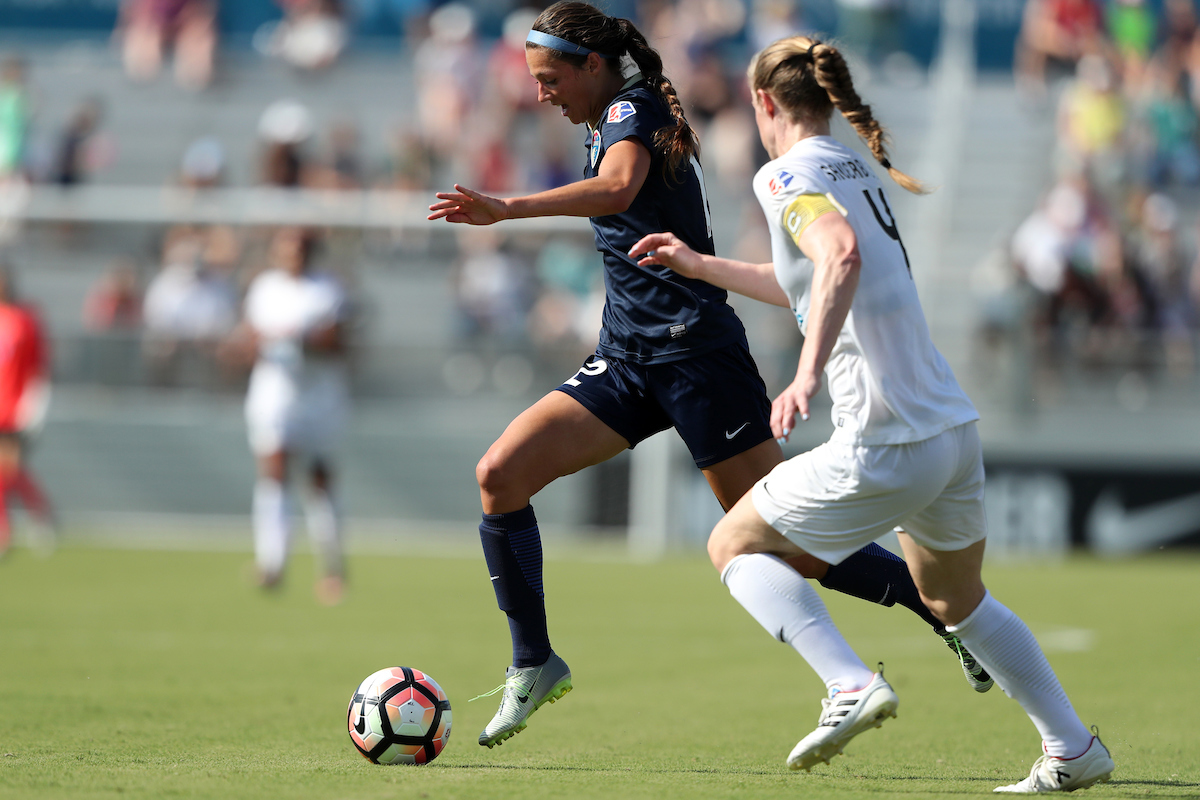 HK: What’s it like to play for the Courage and to represent the fan base that you guys have there in North Carolina?

AH: It’s a huge honor to play for this team. I feel so lucky to be part of this team especially in their first season here in North Carolina. It’s fun to see our fan base build and we have such an amazing fan base so that makes it that much more fun to have home games just because our support system is always there cheering us on. Our fan base is going to continue to grow and that’s something we’re excited to see!

HK: What was your initial reaction when you heard that you’d been drafted by the Courage in January?

AH: My initial reaction was excitement. I wasn’t exactly sure where I would be drafted, but when I heard Courage, it just felt right! I was really excited and couldn’t wait to get things rolling there.

HK: Can you talk about your experience with the USWNT and what that’s been like for you?

AH: With the U-23 team, it’s been so much fun playing with them. Most recently in Sweden, it was great because I wasn’t getting a lot of time on the Courage, so it was nice to go out there and get game experience and compete against the best U-23 teams in the world. Every camp I go to, it’s always a blast just because I am learning a lot and I am able to push myself. The one full team camp I went to was in college and that was really fun too because I got a sneak peak into the professional world before I entered it. So, that was cool to be able to ask questions to the players at camp about the NWSL and their thoughts on the league. I was able to get some insights before the draft which was great. Any camp I go to is a great experience overall.

HK: What athlete do you look up to most?

AH: I look up to Lolo Jones [American Olympic hurdler]. She’s very resilient and she not only is an amazing athlete, but she’s also Christian and I really admire how she’s able to live out her dream of being an athlete but also remain true to her faith.

HK: What’s the best advice you’ve been given in your soccer career to date?

AH: Something that has stuck with me since day one was my dad telling me that it’s the little things that  make a big difference. No matter what level you’re playing at, it really is true. Especially to get to the pro level, you have to be focusing on the little things and you have to be aware of those little things in practice, or in recovery, or just in your daily life do make a big difference. I’d say that’s probably the greatest piece of advice that I’ve been given as it’s helped me get to where I am right now.

HK: What are you passionate about outside of soccer?

AH: Recently, I’ve gotten into water painting which has been really fun and is a newfound hobby. I love reading and playing the guitar. I love doing anything outdoors. Usually in the summer when I am home, I go to the mountains with my family and we go on hikes or go dirt bike riding.