NWSL Player of the Month Sam Kerr and her Australian side will take on Brazil this fall in a two-game international friendly series. (photo copyright Katie Cahalin for The Equalizer)

Today, the Football Federation Australia announced that the Matildas will take on Brazil in a two-game friendly series in Australia set for September 16 and September 19.

The meeting between the two international sides will come shortly after they are set to face off in the United States at the Tournament of Nations on August 3 in California and Seattle. Australia will be taking on the United States and Japan in that tournament in a few weeks. The test for the Matildas against Brazil at home will help prepare Head Coach Alen Stajic’s side ahead of the AFC Women’s Asian Cup set for next April.

“A great rivalry and a healthy respect has developed over the past few years between our two teams. We knocked them out of the 2015 FIFA Women’s World Cup, but they defeated us at the Olympics.” said Stajic in the federation’s official press release. “It will be a tough challenge for us against some of the best players in the world. Brazil has definitely been one of the bench mark nations in world football and we are looking forward to meeting them on home soil again.”

The game set for September 16 will take place at Pepper Stadium in Penrith. After that, both teams will travel to McDonald Jones Sadium in Newcastle for the second match of the two-game series. 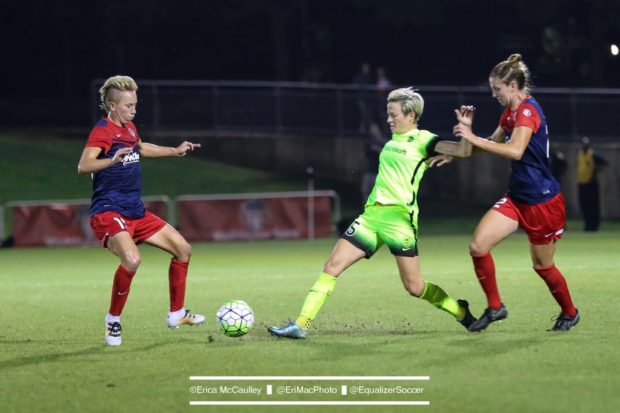 Seattle Reign FC forward Megan Rapinoe was named NWSL Player of the Week of Week 11 as was announced this afternoon after scoring four goals in two games, helping to move her Seattle side into third place in the current NWSL standings.

Most recently, Rapinoe scored twice to lead the Reign to a 2-0 victory at home over the Portland Thorns. In mid-week action, Rapinoe scored both goals as the Reign defeated the Chicago Red Stars last Wednesday.

Rapinoe currently sits atop the league scoring standings with nine goals and also has one assist on the season.

Week 11 #NWSL Player of the Week: @mpinoe of @reignfc! pic.twitter.com/upNYgTDAjN

In other NWSL news, Portland Thorns head coach Mark Parsons confirmed to the Oregonian that Katherine Reynolds will remain out for the Thorns, but Mallory Weber is expected to return for the club’s upcoming match against the Houston Dash this weekend.

Libby Stout, who was waived and re-signed by Boston over the last two months, is heading overseas (photo copyright Linehan Photography for The Equalizer)

Via Twitter, former Boston Breakers goalkeeper Libby Stout announced that she will be making her way overseas to Cyprus to play for Apollon for the next few months.

The Boston Breakers first signed Stout in 2015 ahead of the 2016 season in which she started in 10 matches. The Breakers then drafted rookie goalkeeper Sammy Jo Prudhomme in the 2017 NWSL College Draft from USC and named Abby Smith, who returned from injury, to be their starting keeper for the season. Boston then waived Stout in May of 2017 after she had yet to see a minute of 2017 action.

More recently, the Breakers announced that they signed Stout as a goalkeeper replacement on June 21 which marked her second stint in Boston after being previously waived a month earlier. She was brought on as Abby Smith was ruled out for a lingering injury. Rookie keeper Sammy Jo Prudhomme has seen three starts in three matches during Smith’s absence.

Soccer is again taking me on another little journey. Excited to be heading to Cyprus to play in Champions League for the next few months!⚽️ pic.twitter.com/0n2JquEy9H