An arduous week is over. The Reign were at home for three straight games over 8 days, made their own adversity, and overcame it to take down 7 of 9 points. The Red Stars had grueling travel but wound up with 6 of 9 points to move within a point of the Courage, who did not have to play midweek. The 2017 NWSL season is at the halfway mark. 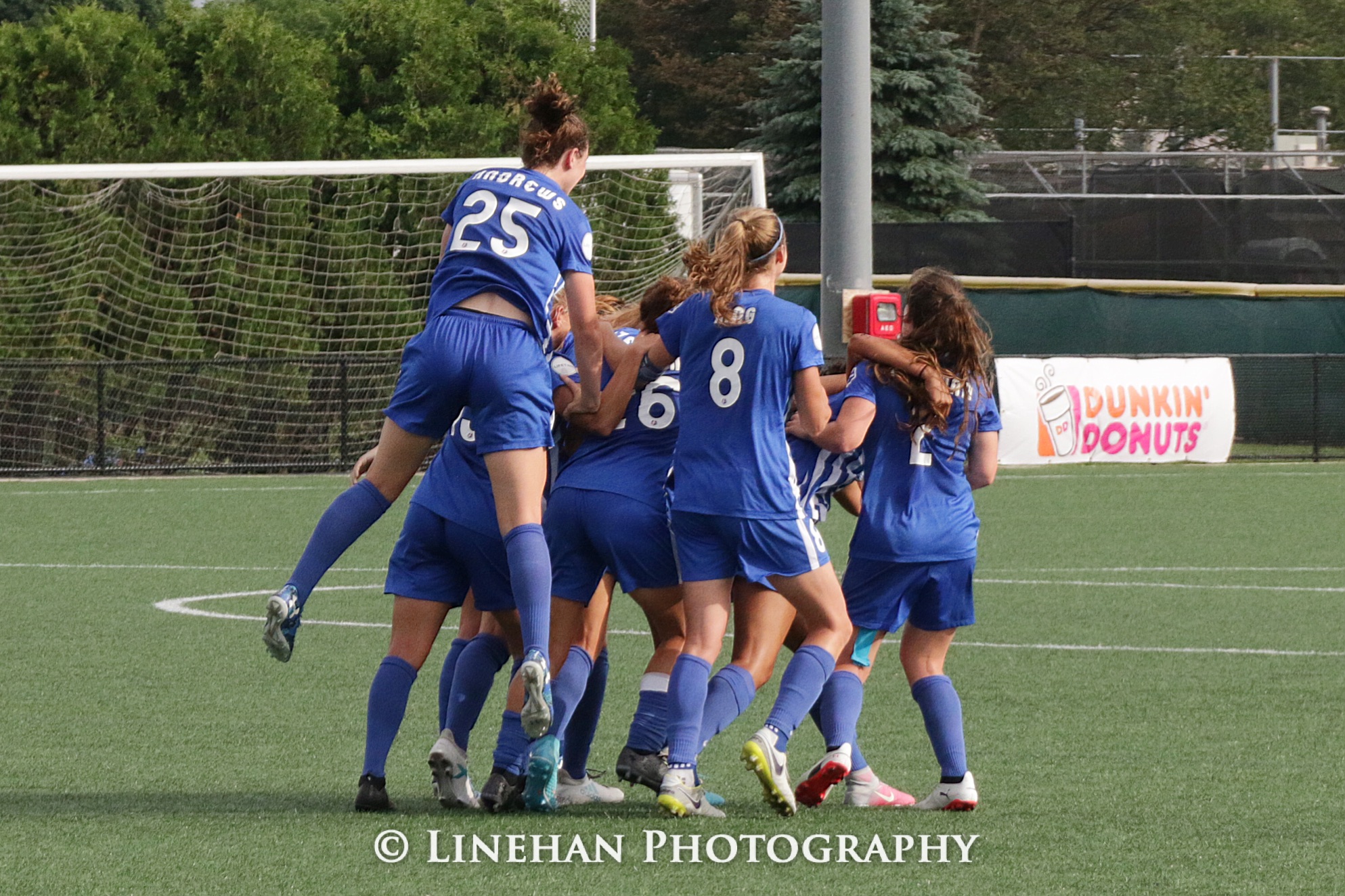 The Breakers celebrate after scoring against the Spirit. The goal, scored by Midge Purce, gave the Breakers a July 1 win after going winless through May and June (photo copyright Linehan Photography for The Equalizer)

Orlando Pride forward Alex Morgan:  On today’s game and returning to play “I think it was difficult having three games in seven days so that was a challenge to begin with. We knew Chicago had the same [three-game week] as us, and [traveled] more miles. But I think we possessed well but I think we dropped off a little as the game went on. And as I came in, probably five minutes later we got so stretched. We had the ball in our court probably for 65 minutes of the game. Once the goal was scored I felt like we were chasing the game. I felt like we were trying to claw our way back, after we had the game in our hands for the taking for that amount of time. It was difficult to come in and get scored on after only two minutes of my first showing with the Pride this year. But, personally, I feel happy that I’m coming out of this game feeling good and healthy and confident and excited to get more minutes next game.”

On if she felt lack of chemistry with the team “I think initially, Tom wanted the three forwards to rotate a little bit. I found myself drifting to the left side a lot, and then me and Marta would switch. So, I think it was fine. But, maybe when Chi came in, I didn’t know what we were playing, who was playing what position. Because Camila was the 10 and then I wasn’t sure where she was and I wasn’t sure where Chi was so there was a little bit of confusion. I wish the communication was better. I think we can work on that a lot more. For me, I was a little nervous coming into this game because I hadn’t played 11v11. I hadn’t played to goal because this week was a tough week with a road game so I didn’t get the opportunity. So, as I came in, I obviously feel 100% but I wanted to get my bearings and get that confidence as the game wore on. I feel like I did and next game I’ll feel even better.”

On trying to score more goals as a team “I mean, this year the team has scored more goals than we scored all year last year so I wouldn’t say the goals aren’t here. We’ve scored four, we have scored three. We’ve conceded quite a few as well. We are looking more to get clean sheets, I think that’s the difficulty right now. Giving up PKs, giving up goals that are unnecessary. In my first 20 minutes, don’t cause that speculation just yet on me and Marta not creating goals. I’m really excited to get to play with her, and some of the other girls up top: Rachel, Jas – who I played with last year – Chi, Camila and obviously Steph with her killer left foot. I am excited to play with these players more and more, and I think the goals will come. It’s just we’ve either been in drought or we’ve been full of goals. We’ve got to get that consistency now.”

Here are some storylines we’ll be following during Week 12:
-How serious is the injury to Jess Fishlock?
-Has Megan Rapinoe ever been better?
-Is Sam Kerr finally a top 10 player in the world?
-Will NWSL hire a commissioner?