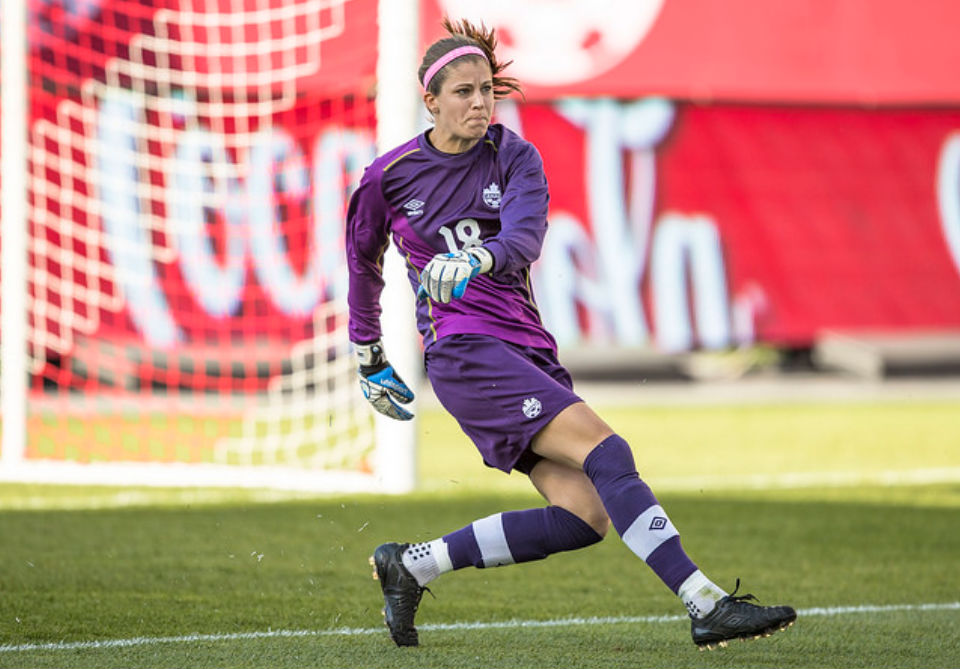 Steph Labbe has consistently been one of the top goalkeepers in the NWSL this season. (photo courtesy Canada soccer)

VANCOUVER, B.C – Canada’s climb up the latest FIFA rankings to fourth overall has been in part due to the tremendous goalkeeping the red and white have available. Stephanie Labbe, Sabrina D’Angelo and Kailen Sheridan have all made a terrific impact in the NWSL with Washington, North Carolina and Sky Blue FC, respectively. Canada’s depth in net has provided a competition battle whenever the national team comes together.

John Herdman has his hands full trying to find playing time at the senior level for his NWSL keepers, all three of whom are earning quality minutes as shot stoppers in the NWSL. When FC Rosengård’s Erin McLeod returns to the national team, you can expect an even further push for minutes.

“We’ve got Erin playing in Sweden as well,” said Herdman. “She’s on our return. This is a great group of goalkeepers we’ve got now. It can be a curse, and an opportunity, when you’ve got that sort of pressure in a group of goalkeepers. It can lead to that worry mindset and the number one worrying about her shirt. If the mind isn’t strong, it can be a curse. At the same time, it’s an opportunity because these women have to battle at the edges of their abilities everyday.”

For Canada’s pair of friendlies against Costa Rica earlier this month, Labbe started in Winnipeg, a match that Sabrina D’Angelo would have started if not for an injury in training, while Labbe and Sheridan split Canada’s 6-0 win in Toronto.

Labbe, the starting keeper for Washington, isn’t used to facing a dormant opposition offense. It’s a bit of a different outcome when she’s in net for the 3-5-2 Spirit. As of last weekend, Labbe is third of all NWSL keepers in saves this season with 44, while Sheridan sits in second with 46 and D’Angelo ninth with 16. Being in the zone has helped Labbe form a brick wall in net.

“Yeah for me it’s just focusing on my job and being present,” said Labbe. “I’m getting a lot of action and getting a lot of shots in the game. It’s about staying calm and doing my part in what I can do to help the team have some success. That’s just staying present, staying in the moment and dealing with every shot and opportunity.”

In her first professional season, Sheridan has taken complete control of the Sky Blue FC net. She’s come in and shown that she’s capable of being a dependable top keeper in the NWSL. The 21-year old is clearly an early NWSL Rookie of the Year candidate.

“It’s been a journey. It’s definitely had its ups and downs,” said a reflective Sheridan. “I think it’s been an amazing experience for me to really come out of my shell, make a name for myself and be on a team where I can learn so much from the older players but also be among players that also want to learn and get better. It’s really given me an opportunity with the coaching staff to grow as a player.”

Watching @Kailen_Sheridan every week feels like I'm watching a world class goalie being made right in front of my eyes.

Most goalkeepers will tell you that they want to get into the action. They want to play the ball early and get a feel for how the game is unfolding. There is nothing worse than sitting in net, not facing much of an attack, and then a fast-break counter attack comes your way.

“We’ve faced a few shots,” admitted Sheridan. “I’ve had a good opportunity to make some saves. I’ve just been in the right places at the right time with some of them. It’s just about being ready for it—you’ve got to be ready all the time for the shots. My team’s doing a good job of preventing crossing and through balls. I’ll take the shots all day.”

Labbe and Sheridan have both had a lot to contend with. While Sky Blue FC hold down a 5-6-1 record and is fifth overall in the NWSL table, Labbe and the Spirit are going through a transition year with a roster shuffle, and numerous injuries.

Whenever Labbe, Sheridan and D’Angelo have an opportunity to face one another at the other end of the pitch, you can bet friendly bragging rights are at stake. They all want to see each other do great things on and off the pitch. They support each other, and in some cases, that extends to voting for ‘Player of the Week’ nominations after a match.

“I’m so happy when they’re having success,” said Labbe. “A couple of weeks ago, I voted for Kailen for Save of the Week that was against me, but I was really just looking out, and she had the best save. I think that’s what’s important in those things, and we need to continue to support each other. The more I can support them, they’ll be pushing me as well.”

The 30-year-old Labbe has learned a lot from Karina LeBlanc and McLeod, and she’s now able to offer advice and encouragement for D’Angelo and Sheridan. It’s all about growing the game and helping the next wave of Canadian talent.

Canada’s goalkeeping has always been a strong source for the national team. Labbe, D’Angelo and Sheridan are showing that they are up to the task of defending the net. Canada is in very “keepable” hands when it comes to big-match goalkeepers.