Sinclair recognized with Order of Canada

Canada WNT and Portland Thorns FC captain Christine Sinclair was appointed Officer of the Order of Canada according to an announcement by Canada Soccer this morning. She is one of 99 new appointments to the Order.

The Order of Canada was created in 1967 and is one of the highest civilian honors in the country. It recognizes outstanding achievement, dedication to the community and service to the country.

“I think what’s special for me is that this goes beyond soccer,” Sinclair said in a statement released by Canada Soccer.  “I am a very, very proud Canadian, I am proud of where I am from, and to be recognized in this nature is surreal.  It’s not something you can dream about happening to you… I can dream of winning a World Cup or an Olympic Gold Medal, and that’s my job, but to have your country recognize you – I don’t even know what to say.”

Captain Canada, as Sinclair’s sometimes referred, was first capped with the Canadian national team 17 years ago. Since her international debut, she has made 279 appearances for Canada and scored 168 goals, second in the world behind Abby Wambach. The 13-time Canada Soccer Player of the Year has also led her nation to back-to-back Olympic bronze medals.

“There’s no one person that’s more deserving than Christine,” Canada Soccer General Secretary Peter Montopoli also said in the release.  “For all that she’s done for the sport – and not only women’s soccer, but soccer in general.   We see it in every match we hold here in Canada, she’s the inspirational leader on and off the field.  She’s been a tremendous inspiration, a role model for Canadians, and this will continue long after she’s finished playing, given what she has contributed to our country, for sport, and for women’s soccer.”

Sinclair is not the only athlete on the list, as NHL Hall of Famer and former Canada national hockey team forward Mark Messier also received the honor. 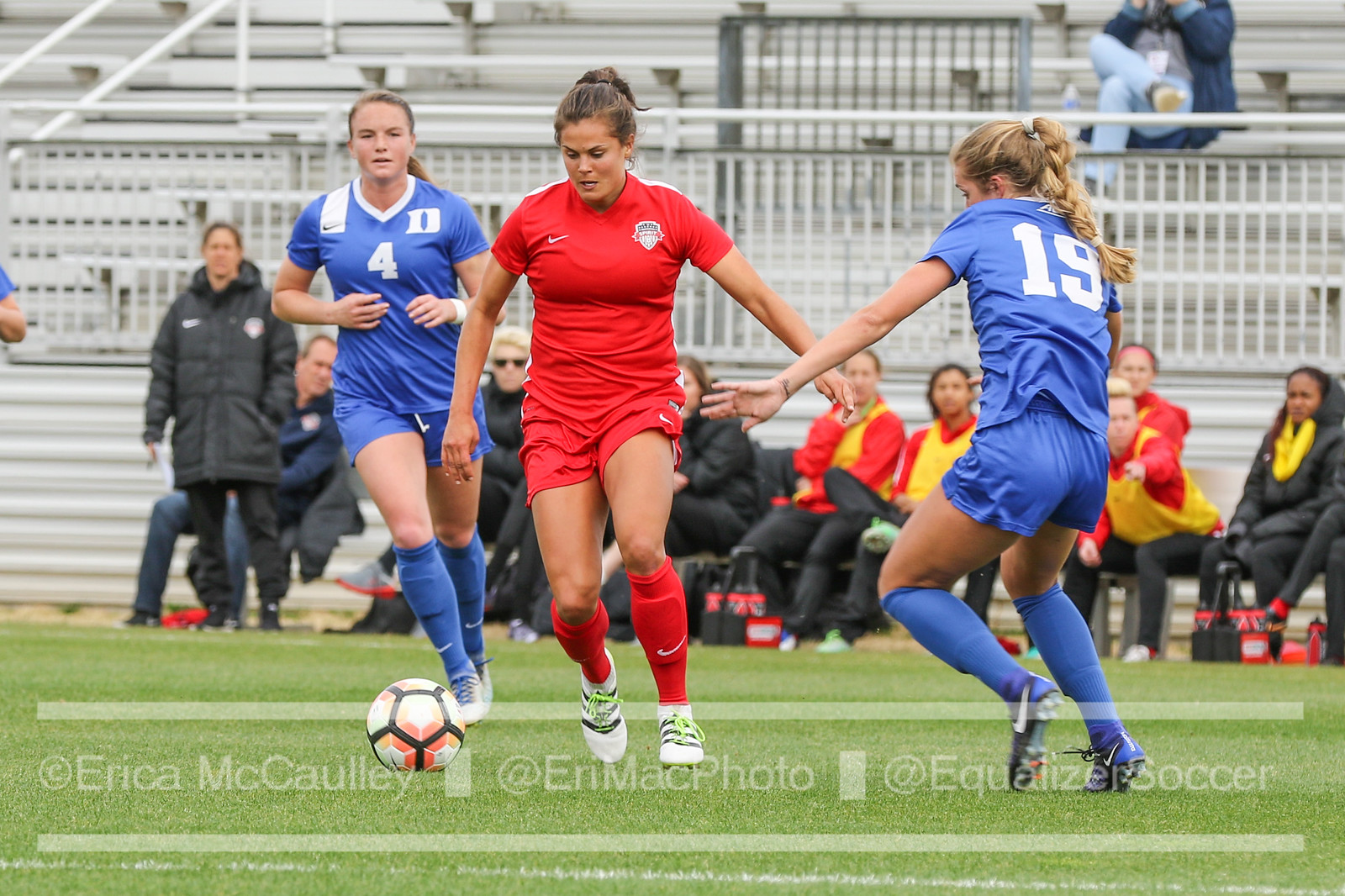 Katie Stengel was claimed off waivers by the Boston Breakers. (photo copyright EriMac Photo for The Equalizer)

The Boston Breakers announced today that they had claimed former Washington Spirit forward Katie Stengel off waivers. To make room on the roster for Stengel, the Breakers waived defender Kylie Strom.

Before being waived by the Spirit on Wednesday to make room on their roster for new signings of their own, the Melbourne, Florida native started three of the five matches she played in this season. Stengel may have seen more action, but a bone bruise suffered in a Week 2 match against the Orlando Pride sidelined Stengel for three weeks.

“Katie is a player that will bring more quality, experience, and competition to our roster,” Boston Breakers head coach Matt Beard said in a statement released by the team. “I’m looking forward to working with her.”

Stengel joined the Spirit ahead of last season after playing with Bayern Munich in 2014-2015. She played in 20 matches and scored 9 goals for the German side, helping them to win the 2014-2015 Frauen-Bundesliga title. Before that, she played collegiately at Wake Forest, where she set a program record for goals, scoring 50 in 75 games.

{MORE: NWSL in good hands with CanWNT keepers | Week 11 Preview: All about depth}

“I’m really happy we were able to get this done in a short period of time,” Boston Breakers President of Soccer Operations and Development Lee Billiard said. “It’s very tough to not sign a player like Katie when they become available. We are excited to have her in Breakers blue.”

Breakers fans will have to wait to see Stengel in action though, as she will not be available for Saturday night’s match against her former team, the Spirit.

Strom joined the Breakers in August 2016 after spending time on their reserves team and, before that, their college academy team. The former Boston University defender played in seven matches last season, starting three, but had not made an appearance for the Breakers this year.

Germany are defending champions at the Euros. (MEG LINEHAN/Equalizer Soccer)

Germany announced its 23-player 2017 European Championship roster, led by head coach Steffi Jones. The team is looking for its seventh consecutive Euro title and is one of the favorites to win. However, it will have to do so without a number of its regular faces.

Most notably, Alexandra Popp was was left off the roster after suffering a knee injury in training earlier this week, for which she was reportedly getting an MRI. Her omission from the Euro roster is a sign that the injury could be severe. Pauline Bremer was not one of the players tapped by Jones to compete next month, while both Simone Laudehr and Melanie Leupolz were once again unavailable for selection as they continue recovering from injuries sustained earlier in the year.

Germany, the strongest competitor in Group B, will first take the field on July 17 against Sweden in a rematch of the 2016 Olympic gold medal match. Then on July 21, they take on Italy, and on July 25 they close out group play against Russia.

Russia, headed up by Elena Fomina, named its tournament roster yesterday. The team, which didn’t make their Euro debut until 1997, has yet to make it out of the group stage of play. With group opponents such as the reigning Olympic gold and silver medalists, they face a very tough battle if they want to make history in 2017.

The rosters for both teams are below.