NWSL (Mid-)Week In Review: On Women In Non-Playing Roles 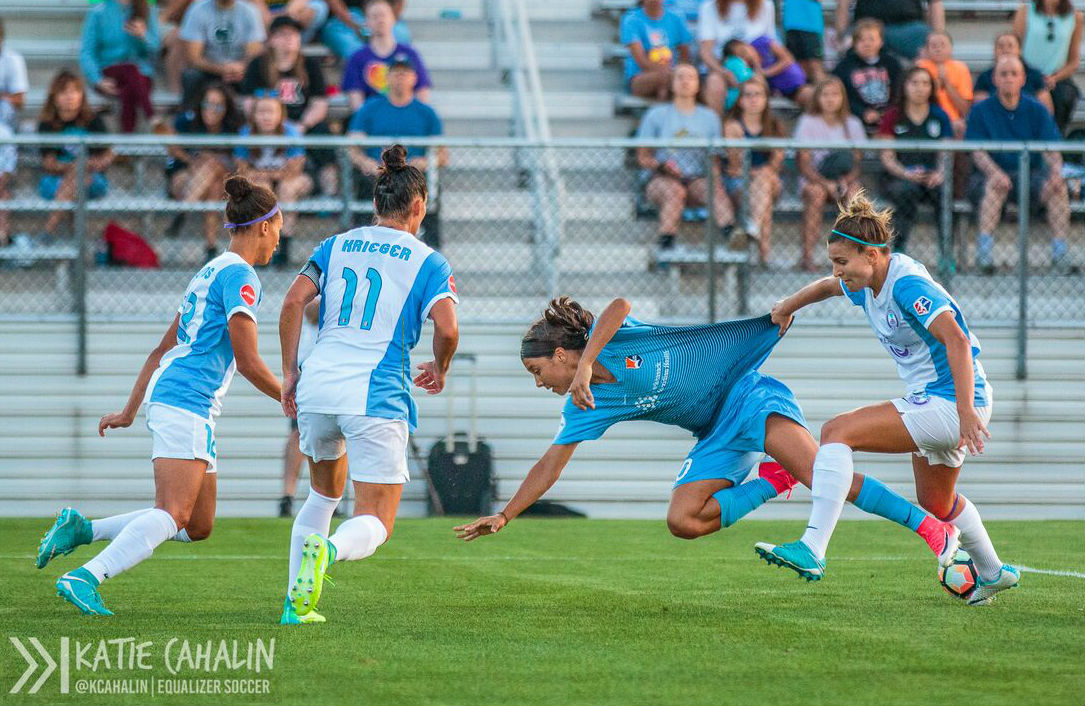 Steph Catley gets a fistful of Sam Kerr’s jersey after fouling her in the box. (photo copyright Katie Cahalin for The Equalizer)

If you didn’t read Stephanie Yang’s story on the lack of female coaches in women’s soccer, it’s probably a good time to do so, seeing as most of this introduction is predicated on what she said. Also, it’s very good.

For instance, her anecdote from Amanda Cromwell is spot on. How do I know? It happened to me twice as an assistant on a youth club team with a female head coach last season. If you guessed both times the official was male, good job. Then again, you probably knew it was a man reffing because I believe we had one female center official all season.

Wednesday night’s Sky Blue-Orlando game featured Danielle Chesky (called Daniel in a pregame notes Freudian slip) as the center official, who has seemed to improve greatly after a bit of a rocky start two years in NWSL. She awarded Sky Blue a pair of penalties in the first half Wednesday, the second of which looked extremely questionable (and a Sam Kerr flop), but alas, vidual evidence in the form of a photo later confirmed that Kerr’s shirt had been unequivocally pulled by Steph Catley.

One call does not a referee’s career make, but it seems that Chesky could be heard from at the international level soon, she has been featured in USL men’s games this season already and has done youth international contests. FIFA does not use male officials for women’s international tournaments, and for everything FIFA gets wrong, that may be something they should be commended for.

What about the other female center officials Wednesday night in NWSL? Well, there were none. The male dominance can be seen in other off-the-field areas as well, where (while Jenn Hildreth handles the weekly duties nationally for Lifetime) they were no female play-by-play announcers on Wednesday night’s slate as well.

You probably didn’t need Stephanie’s investigation to tell you that only one NWSL head coach is a woman, but it’s worth noting that the issue probably goes well beyond coaching. And if you think it’s ironic that this is pointed out by a man writing about women’s sports here, you’re not wrong, but I am heartened to see many more of my colleagues being women than was the case a decade ago.

I hope they stay with it long after I’m gone. The woman that coached with me last year? She gave it up after last season: she had a new job, was getting married soon and was quite sick of hearing from parents and the male club director. One of my better players from a few years back moved fairly high up on the youth officiating ladder before she graduated college and decided it wasn’t for her.

How many like them are out there? How do we get them to stay in the game? It’s a systemic problem and requires a systemic solution, one that sadly might not be forthcoming anytime soon.

What else did we learn as we had a full slate of mid-week matches to keep us busy?

What Went Down: The Pride have had a few of these matches this season and have seemed to lose just about all of them, so maybe they were due. But they were helped tremendously by a brutal performance by the young Sky Blue defense, self-admittedly so by Christy Holly afterward. Really, all three goals were eminently preventable and that’s going to be tough to deal with for Sky Blue, except to acknowledge that they may be some personnel changes forthcoming as a rested North Carolina must be drooling to get them Saturday on national television.

Orlando looked dead and buried midway through the second half, but some timely subs and general belief pushed them over the top, with Alex Morgan returning very soon (Tom Sermanni said she could be in the 18 this weekend).

#Highlights: Ubogagu, Marta and Hill with goals for @ORLPride in 3-2 comeback win over @SkyBlueFC as Kerr and O’Hara both scored. #NJvORL pic.twitter.com/TaLRO5pPfG

Player of the Game: Kristen Edmonds – Extra points for being the hometown player, but Edmonds improves with every game at outside back, a position she didn’t play at all last season. They’ll need her to be solid in the second half of the season.

Under the Radar: Sam Kerr – Yeah, scoring perhaps the Goal of the Year won’t keep you under the radar, but thought it at least bears mentioning. Ironically, the standard-bearer for best goal in NWSL history was set by an Australian for Sky Blue at Yurcak Field: Lisa De Vanna in 2013.

Was there any other choice for today’s #TBT? Last night’s bicycle kick goal by @samkerr1 reminded us of another @skybluefc gem from 2013! ?? pic.twitter.com/PWAUaqLSKy

Inside the Numbers: 5 – Shots on goal from Orlando in the game, but they made what they had count.

What Went Down: The Dash’s attack has been painful to watch at times this season, and this game was no different as they looked pretty good at times, but just seemed to make poor decisions every time they got near the penalty area. They can be pleased at another clean sheet, although it did seem like the bizarre sequence that saw an Adriana Leon shot ricochet off Natasha Dowie should have stood. In fairness to the official, Dowie did put her hands up to protect her face, but the ball never seemed to make contact there. A good point, I guess, for Boston, who had the better chances at the end, but still not a whole lot of offense.

Player of the Game: Cami Levin – Part of the new-look Houston defense, Levin had a couple of timely challenges when the Breakers were on the attack and now has (along with Jane Campbell) been part of back-to-back clean sheets.

Under the Radar: Christen Westphal – Westphal seems to have settled in at the center back spot for Boston as the season is nearly halfway done. Small steps, but the Boston defense has been fairly solid in its last couple of outings, too.

Inside the Numbers: 1, 0 – Number of home wins for Houston and road wins for Boston this season. Neither moved Wednesday and neither is good enough to get anywhere near the playoffs at this point.

What Went Down: The Thorns responded to their recent struggles with a performance that looks more dominant than it probably actually was, but they played solid defense and definitely took advantage of the opportunities provided them, including another uncharacteristic mistake by Nicole Barnhart. But Portland’s midfield looked much more confident here, just in time to lose Amandine Henry for a little while. For Kansas City, they created a few chances, but a disappointing performance overall.

#Highlights ? @sincy12 earned her first brace since 2013 on Wednesday night, leading @ThornsFC to a 3-0 victory over @FCKansasCity. #PORvKC pic.twitter.com/bN7lIEzXDO

Player of the Game: Christine Sinclair – Like her team, when you begin to doubt her even a little, she comes back with a performance like this. The final goal was vintage Sinclair, and she was giving Kansas City problems pretty much from the opening kickoff, which is no small feat usually.

Under the Radar: Dagny Brynjarsdottir – With right back a bit of a problem lately, Mark Parsons employed Brynjarsdottir there and she did an admirable job, particularly in attack, where she helped set up the first goal and was a problem all evening. I think people forget how strong a player she is because of her time out, but if she’s available down the stretch, it will definitely help their cause.

Inside the Numbers: 1 – Number of career NWSL goals for Hayley Raso after scoring Portland’s second goal. To be fair, Raso wasn’t actually shooting on the tally in question, but she surely deserved at least one for her hard work the last couple of seasons.

What Went Down: More penalty kick fun here as Megan Rapinoe hammered a pair of them home to give the Reign a massive comeback win that it didn’t look like it would get for most of this match. The Red Stars had the better of the play in the first half and were rewarded with a goal, and Seattle’s first penalty really came out of very little. After that, though, Seattle took over, with the travel maybe eventually getting the best of Chicago. Still, it was three points the Reign badly needed, and as I said last week, the Red Stars are going to be faced with some road tests in the next few weeks and they didn’t pass this one.

HIGHLIGHTS ? @mPinoe put away a pair of penalty kicks to give the @ReignFC a come-from-behind win, 2-1, over the @chicagoredstars. #SEAvCHI pic.twitter.com/QKGeQayvlV

Player of the Game: Megan Rapinoe – She has had a heck of a week, and although both her goals were penalties, she was again the best player on the field in this game, and one of the most active.

Under the Radar: Rebekah Stott – When in doubt, put a Fern at center back, as it was Stott who filled in for the suspended Lauren Barnes (and with Rachel Corsie injured). She wasn’t perfect, but Stott did a very good team against a talented Chicago attack, and most importantly, helped get her team three big points.

Inside the Numbers: 4 – Place the Reign are in currently, just one point behind Portland and three in back of second-place Chicago.