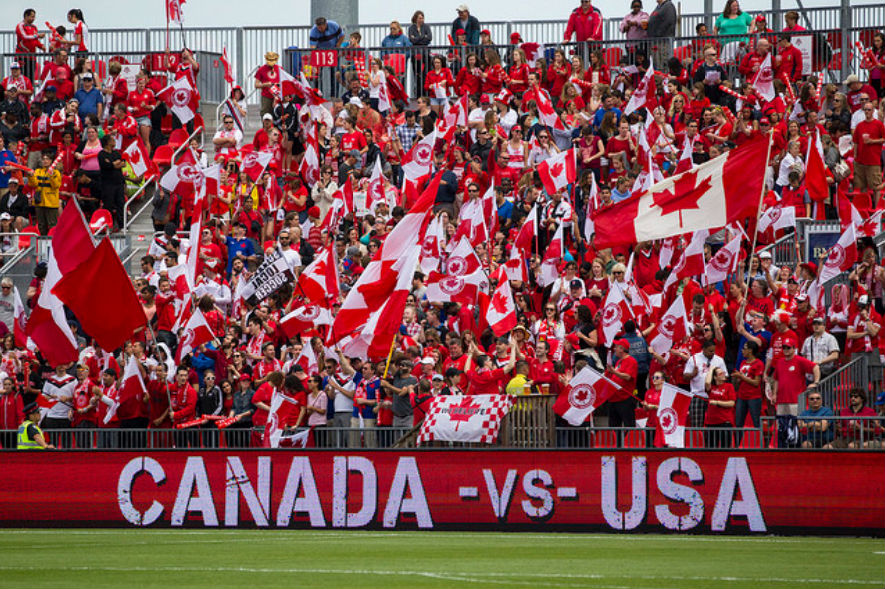 Two of the fiercest rivals will meet in a pair of friendlies this November. (photo courtesy Canada Soccer)

VANCOUVER, B.C – The next chapter in the Canada vs U.S. rivalry will be written in November when No. 4-ranked Canada hosts the No.1-ranked U.S. in a friendly, on Thursday, November 9th, at B.C. Place in Vancouver. The teams will also meet in the United States on Sunday, November 12 at a to be announced venue on the West Coast. U.S. Soccer is expected to make that announcement sometime next week.

The U.S. holds a convincing 47-3-6 record over their northern neighbors in what is a one-sided rivalry. John Herdman would love nothing more than to be the coach in charge when Canada finally earns a win against the U.S, and that could come as soon as November.

“I’m hoping we can fill the stands and give the Canadian public a bit of a surprise,” said Herdman. “To knock the U.S. off at any point, you’ve got to be right on your game. I think this team is progressing to a point where we’ll get close.”

The gap between the 2015 FIFA Women’s World Cup Champions and the host country is certainly closing. Canada is producing top talent that’s now playing in Europe and winning tournaments like the Champions League. The 2016 Rio Olympic bronze medalists are striving to reach that same high performance level that the U.S. have maintained or so long. Herdman knows Canada is growing and knocking on the door.

“I think the gap has changed,” said Herdman. “The U.S. still have a great depth in their team, a great roster, but I think we have some individual players, or more individual players across multiple positions, that can really compete with the U.S. team.

“On paper, I always look to see how many players would get in the U.S. team from Canada. Then you start to realize how you’ve got to approach the game. With this group of players, I think there’s a few of them that could get in the starting eleven of that U.S. team. In the past, we probably would’ve said that would’ve been Christine [Sinclair] and nobody else. I think we all know the players now that would be coveted by other teams in the world.”

Jordyn Huitema could be a special player that has the ability to help Canada turn around the lopsided rivalry with the U.S. The 16-year old has grown up watching previous big matches between the two nations. This fall she will finally get to step on the pitch and play against the senior U.S. team that she has seen and heard so much about.

“There’s a rivalry for sure. It’s Canada versus U.S.,” said Huitema. “You’ve got to respect the players and how they play. They’re all very powerful and great players.

“It’s definitely going to be a great game and a rivalry that I’ve looked forward to playing in since I was young.”

Erin McLeod is one player that has had many a battles against the U.S. The FC Rosengård goalkeeper is back playing soccer and on a return to play schedule. Whether she’ll be on Canada’s roster for those matches in November is not clear just yet.

“We have to see how she comes through,” admitted Herdman. “We sent a very clear message after she put her body on the line and got us through to that Rio Olympic games. Without her, I’m not sure we would’ve went to Rio.

“What we’ve always said to Erin [is] ‘Look, you put your body on the line for your country’—and she did, she put herself in a position that made her vulnerable, and she ended up with that knee injury—we’ve said, ‘Don’t rush back.’ That’s the key for Erin. She’s an amazing person, amazing player, [but] there’s no rush for Erin. We want to make sure that she’s ready to play against the best teams in the world. When she is, she’ll be back with the team.”

However, as one of Canada’s current players playing in Europe, it could be a tricky task trying to get McLeod, Sophie Schmidt, Ashley Lawrence and Kadeisha Buchanan released to play for Canada. The matches will fall outside of the FIFA calender window of November 20-28. Chelsea Ladies FC’s Crystal Dunn could be in the same boat for the U.S.

“It’s always a challenge,” said Herdman. “In the build up to Rio, we had eighty-percent of our core playing in the NWSL, on one continent, on one calendar. As the players become move coveted by these top clubs, you can’t stop their progression in their careers. More importantly, you want them to be exposed to these dynamic environments where they get exposed to diverse experiences which they bring back.

“…We’ll be working hard with the clubs and the players. The players desperately want to be here. For some of these clubs, it’s a Champions League window when these games are on.”

Chilliwack, B.C. native, Jordyn Huitema will be there, and she’s already talking like a well-seasoned veteran when it comes to approaching the top team in the world. It would be a massive feat for Canada to pick up a win. The U.S. knows that they own Canada, so they will want to make sure that win and loss record stays where it has for so long.

“It’d be amazing, and definitely since it’s my first game against the U.S., it’d be amazing to be a part of that win with the team. It would mean a lot for us, and moving forward to see our benchmark go up,” said Huitema.

There’s always excitement when Canada and the U.S. meet on the pitch, ice, court or any other sport. Canada has been in the shadow of the U.S., but you wouldn’t put it past the Canadians to turn up, front up and make history.