The Lowdown: The ups and downs of life in the middle of the table 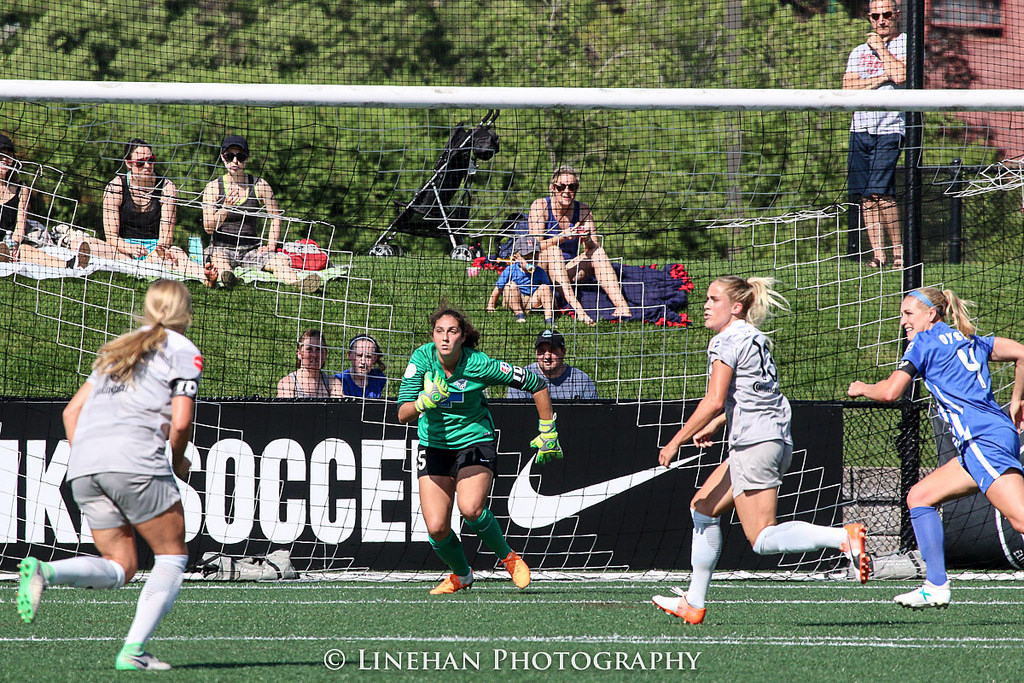 Sammy Jo Prudhomme,in green, coming out for a ball during her professional debut last weekend. (photo copyright Linehan Photography for The Equalizer)

Last weekend, a bizarre sequence threatened to alter the long-term fate of two mid-table teams. But the fallout from Lauren Barnes’s 4th minute red card has not been—so far anyway—what it could have been.

Let’s look at the play in question. Barnes, the Defender of the Year and annually one of the most reliable backs in NWSL, made a poor touch that looked like it would allow Shea Groom to get in for a breakaway against Haley Kopmeyer. Barnes would have none of it though, and rather than give up the early scoring chance, dragged Groom down from behind. In a league where officiating is called into question more often than not, the straight red card to Barnes was about as straightforward a game-critical decision as there has ever been.

“Red card. There is no question about it,” FC Kansas City head coach Vlatko Andonovski said before declining to elaborate on whether Barnes deserves any further punishment for the play.

Reign coach Laura Harvey is fond of saying “Goals change games,” but in this case, it was a red card that changed the game. Harvey was already without injured Rachel Corsie as Barnes’s center back partner, so she sent Jessica Fishlock back to central defense to pair with rookie Kristen McNabb.

“When Lu [Barnes] got sent off, I quickly talked to Jess and put her in the back line,” Harvey said. “She can lead and organize in front of her, and I thought she did that well.”

Still 12 minutes after Barnes went off, FC Kansas City were in front on Brittany Ratcliffe’s first NWSL goal. The entire complexion of the game, and the middle of the NWSL table, had changed.

“Looking at the result, if somebody told me we were going to tie Seattle in Seattle, I would say, ‘Okay, I’ll take that,’” Andonovski said. “But after the circumstances of what happened, I wasn’t happy with the outcome. But that’s the beauty of the game. Just because you’re a player up doesn’t necessarily mean you’re going to win the game.”

And FC Kansas City could not finish it off. The longest advantage in manpower in NWSL history did not result in a victory. Instead, Naho Kawasumi scored in the second half, and the old rivals walked away deadlocked 1-1, their second draw in two weeks. To echo Andonovski, a result that ordinarily would have thrilled the visiting side instead left the Reign—who have now scored a goal in 37 of 39 games at Memorial Stadium including playoffs—practically dancing in the streets beneath the Space Needle.

“Every single player that touched the field tonight gave everything,” said Harvey, who admitted it took some time to figure out how to solve things with Barnes out. “I told the girls at the end of the game that games like that can be a turning point for the season. I don’t think we need a turning point but we needed something to live by and we’re better when we have adversity against us, and tonight we had that, and we stepped up. A lot of teams that are down to ten players for that amount of time would have crumbled, but we didn’t and we never looked like we were going to, which I’m super proud of.”

For the Blues it was the second time this season Andonovski was left scratching his head over what may have been. The other one, he said, was a 1-0 loss away to Sky Blue in which he though his club had been the superior side.

“I think that we’re getting better, and the players are starting to get a pretty good understanding of their roles and expectations,” Andonovski, who had to alter his entire stratagem for the season when Amy Rodriguez tore her ACL on opening day, said. “I think that as a team we’re doing better, but also individually the players are taking more responsibilities.”

The draw left the Reign and Blues as the first two chasers to the playoff line, one and two points respectively behind the Thorns. Both teams play the Thorns this week—Kansas City Wednesday night in Portland, and the Reign Saturday night in Seattle—so a solid string of results can get either or both up above the line.

Andonovski is not paying much attention to the table just yet. “My players know me well. We do want to win and get as many points as possible, but we’re more focused on the process because we know that ultimately the process will get us the results.”

The scenario does not end for the Reign, who must now face the Red Stars with Barnes suspended. There is probably no better time to sit than the middle stretch of a three-in-eight run, but the Red Stars have had the Reign’s number of late and being without Barnes and Corsie won’t be easy.

“I have to find a center back, obviously Lu [Barnes] can’t play.”
***
A bit further down table, the Orlando Pride were poised to win for a third straight time and improve to 5-1 against the Dash. But a funny thing happened on the way to paradise. The Dash got a Carli Lloyd golazo, and the Pride looked as if they thought the first half hydration break was the end of the match.

Marta and the Pride lost to the Dash, and lost some momentum as well. (photo copyright Katie Cahalin for The Equalizer)

The first Dash goal was a screamer by Lloyd taken outside of the box, but rolling the tape back 30 seconds shows the Pride never should have come close to conceding. It was the final minute of first-half stoppage time, and the Dash looked to be comfortable going in 0-0. But a seam opened on the right flank when Monica and Steph Catley were too casual in their defending, allowing Poliana and Lloyd to break through and get some space.

Sermanni did not mention anyone by name, but his assessment of the match continued: “I just think we had too many players who played poorly. It is as simple as that. The tactics weren’t an issue. We obviously tried to change things when we were chasing the game in the second half, as you have to do. But I just think on the day we had too many players who were poor. We didn’t keep the ball well, we weren’t aggressive enough with the runs, we didn’t move the ball quickly enough. And just on the day we didn’t play well. Whatever reason, I don’t know, but that happened on the day.”

The Pride have a signature win over the Courage earlier in the season, but their recent two-match win streak was against the Breakers and Dash, who occupy the bottom two spots on the table. If the second-year side is to make good on the addition of Marta and other offseason moves designed to contend now, they will have to start beating better clubs and stop laying eggs against teams they should be handling.

“These are the points that we are able to get and that we need to get in order to climb up the table, and so that’s frustrating,” Pride defender Ali Krieger said. “Obviously, we’re good enough to beat this team and we’re good enough to win these games and it was a poor performance and we know that and we know that we need to come out with a little bit more energy and it started off after the first few minutes of the game.”

Next up for the Pride is a trip to New Jersey where they led 1-0 last month before capitulating for a 2-1 loss that also left Sermanni and Krieger scratching their heads. The weekend is a return home to face the Red Stars. That was a tough matchup for the Pride last season, but the Red Stars will be fresh off the plane from Seattle and may not have Danielle Colaprico, who is out for the midweek with an ankle sprain.
***
History has not treated mid-table NWSL teams so well through the years. Sky Blue in 2014 and the Reign last year both made admirable runs at late playoff spots, but both fell short. Generally speaking, the teams that have paced the league into the summer months have remained there until the end.

That trend will change one day, but one thing is for sure. The middle of the table will be subject to the fluctuations of ill-timed red cards, the inability to capitalize on them, and teams that can’t seem to put the hammer down when it matters most.

-My Player of the Week ballot: 1) Carli Lloyd – the engine that helped the Dash snap a six-game losing streak with a great goal and wonderful ball to unlock the Pride defense and create another; 2) Shelina Zadorsky – anchored the Spirit’s defensive effort in 1-0 win over Thorns; 3) Sam Mewis – because she bossed the midfield for the Courage and made a sublime pass to Ahley Hatch for one of the best assists of the season.

-If there have been better outside backs this season than Casey Short and Estelle Johnson, please fill me in.

-In Omar Morales’s postmatch interview on Lifetime he said the Dash worked a lot during the week on giving 90 minute of effort. Interviews like that often go with a grain of salt, but if that’s true, the Dash were and are in much worse trouble than I thought.

-Hate to keep hammering the Dash after a win, but how in the world did Kealia Ohai get back on the field after the hydration break? I know many players keep going for a bit after tearing their ACLs but in that particular moment there was just no justification for her going back in.

-Watch Madison Tiernan (24th) and McKenzie Meehan (34th) against the Red Stars and tell me that Christy Holly hasn’t got this draft thing nailed pretty good.

-Another weekend, another instance of the hydration break time not being properly added on at the end of the second half. One of these times, this will matter.

-I won’t say I was happy to see Mark Parsons and Jim Gabarra in a verbal sparring contest after the Spirit’s win over the Thorns, but I didn’t mind it. Emotion is part of sports. Players and coaches should show it. As for each of them handled the postgame questions, you can judge that one for yourself.

-It was streak buster weekend. First Danielle Colaprico sprained her ankle which will cost her a rather impressive streak of 50 consecutive starts since being drafted in 2015. She did not travel with the Red Stars to Seattle for Wednesday’s match. When the team gets there, they won’t have Lauren Barnes in their way. The 2016 Defender of the Year was sent off against Kansas City and her automatic suspension will snap her streak at 60 straight games played.

-Impressive as it is, Colaprico’s streak is not the longest in her draft class. Abby Dahlkemper has started 51 straight, now the longest active streak of any kind in NWSL, and her league record for consecutive minutes is alive and well at 4,410.

-Barnes’s suspension means that she will be frozen on 95 career games and allow her Reign teammate Christine Nairn to tie her for the all-time lead should she play on Wednesday.

-Barnes’s red card was the earliest in NWSL history.