NWSL Week 10 was an exciting one — Carli Lloyd returned to national television for the first time this NWSL season, Brittany Ratcliffe scored her first-ever professional goal for FCKC, and Sofia Huerta helped the Red Stars mount a comeback over Sky Blue FC. Let’s check out three important storylines from the week and the goals that put them there.

Carli Lloyd returned to the Dash after spending the spring with Manchester City. (Photo Copyright Clark Linehan for The Equalizer)

What Happened: In her second game back with the Dash this 2017 season and first appearance on Lifetime, Carli Lloyd’s first-half stoppage time rocket helped Houston get back to its winning ways. Lloyd opened scoring for Houston in a game that they went on to win by a score of 2-0 over the Orlando Pride.

How It Happened: Poliana takes advantage of space down the right flank as she starts driving in Houston’s attacking end. Right as she gets into the box, Orlando defender Toni Pressley starts to force her to make a move. Poliana then has a few choices — where the majority of attacking minded players would continue driving, be it end line or across the box, Poliana choose otherwise. With some swift footwork, she picks her head up and instead of continuing to drive ahead, she notices Lloyd who’s slightly behind the play. Due to her ability to not only pick up her head and see Lloyd, but make a quick decision to lay the ball back instead, Lloyd ends up at the edge of the box with the ball at her feet, a position that the USWNT midfielder is anything but a stranger to. Lloyd anticipates the ball back from Poliana and hits it first time. Her shot is classic Carli Lloyd. She employs great technique to hit it first time from 20 yards out and rocket the ball into the upper 90 far post. Her one-time shot prevents any Orlando defenders from having the chance to block it and her shooting technique makes it so Pride goalkeeper Aubrey Bledsoe has zero chance at keeping this out of her net. 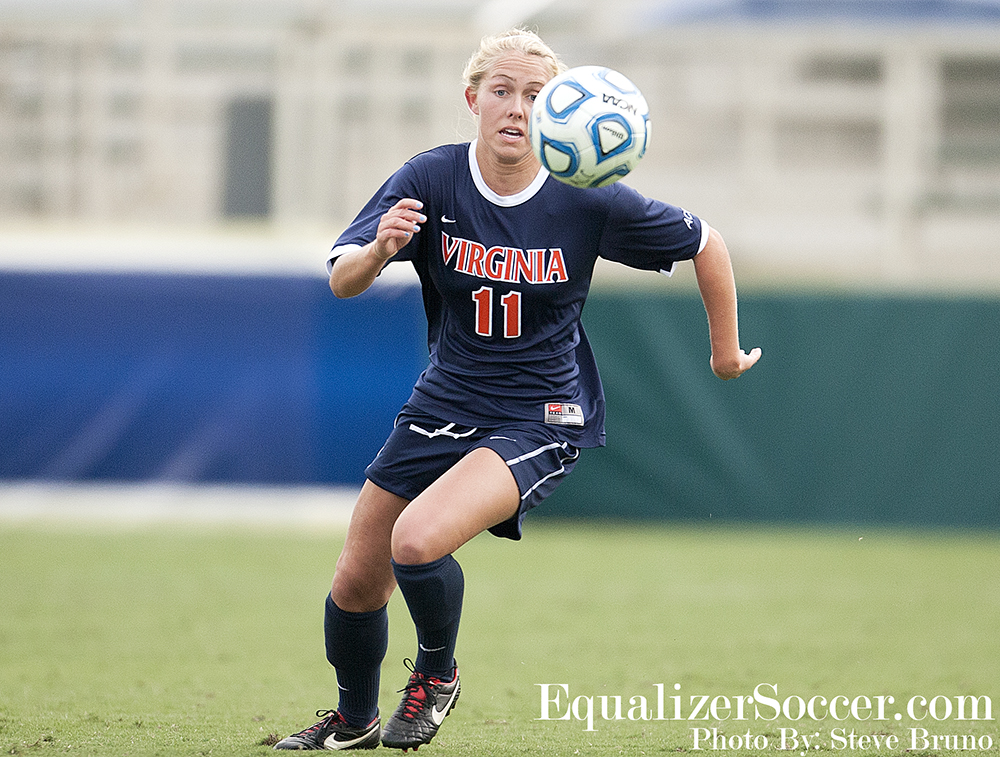 The UVA alum scored her first NWSL goal this past weekend for FC Kansas City in Seattle.

What Happened: In the 16th minute, Brittany Ratcliffe scored her first-ever NWSL goal for FC Kansas City to give them a 1-0 lead on the road against the Reign. A late Seattle goal ends up tying the game at one a piece and both sides get away with a point for the second straight week.

How It Happened: First, we see Yael Averbuch play a ball on the ground to Alexa Newfield. This pass is super important because it really starts the attack. Before the ball is played from Averbuch, Newfield moves to her left to get into a small patch of open space, strategically between two Seattle players. With this positioning, Newfield is in a great spot to receive the ball with her back to goal. Averbuch slots her the ball, and what Newfield does next is pure class. She recognizes not only the position that she’s in, but also that of her teammate, Ratcliffe. By seeing that she’s split two defenders and that Ratcliffe is in behind her, she uses one touch to flick the ball on to Ratcliffe who’s inside and in a better position to be in on goal. Newfield’s recognition of the fact that she needed to play one-time since two Seattle players were coming in from both sides, and that Ratcliffe was in behind her was super instrumental in setting up what happens next. Her flick on with her right foot ends up finding Ratcliffe perfectly, in between Seattle’s Fishlock and McNabb and right in front of the goal. Neither defender is able to close down Ratcliffe who uses two touches to slot one home past Kopmeyer locking in her first NWSL goal.

With her goal on Sunday, Sofia Huerta now has two goals and three assists on the season. (photo copyright Lewis Gettier)

What Happened: Sofia Huerta’s 67th minute finish proves to be the game winner as the Chicago Red Stars defeat Sky Blue FC on Sunday after initially going down 1-0 inside the first three minutes of the game. The goal is Huerta’s second on the year for Chicago.

How It Happened: Yet again, we see some individual attacking brilliance from the 24-year old forward for Chicago. But first, let’s look at this ball in from Casey Short. The USWNT defender gets a great ball from Press who’s checked back and lays it off to her out wide. Short was on the move down the left sideline before Press even gets the ball, and due to great vision from Press, she’s able to see Short and lay her off first time, giving Short the ball at her feet with tons of space to run into down that sideline. Short takes off, and with a few strong, fast, and central dribbles, she’s set herself up to lift her head up and find her next pass with no pressure on her. Short’s run is really important because she’s starting the attack here by taking advantage of the space with her speed which ends up giving her the time to pick out Huerta. And she does just that- Short plays a ball in the air that finds Huerta at the top of the box. Huerta plays the ball out of the air in such a controlled fashion that does two great things. First, she receives that ball in the air with a defender right on her back. By settling it out of the air first time, Huerta is able to keep her body between the ball and her defender, not allowing NJ defender Mandy Freeman to step in. Second, that same first touch is placed right into a small gap of space which ends up allowing her to get her shot off. This Huerta first-touch is key in setting up her attempt on goal. If she misses that in any way, it’s going to be easily cleared away by the NJ backline. After the touch, she turns her body and as both Freeman and Christie Rampone try to close her down, Huerta finds a seam in between both of them to get a shot off that she places perfectly into the side netting. Just a shot on goal wouldn’t have been enough here as Sky Blue keeper Kailen Sheridan was in a position ready to make a save, but that fact that Huerta strategically places this low side netting, Sheridan is unable to even get a hand on it. The side-netting finish locks in the goal for Huerta and the win for Chicago.

67′ – #CHI Goal – What a finish by @schuerta who finds a seam and fires a shot into the side netting. #CHIvNJ pic.twitter.com/F3ZFsjtZDx