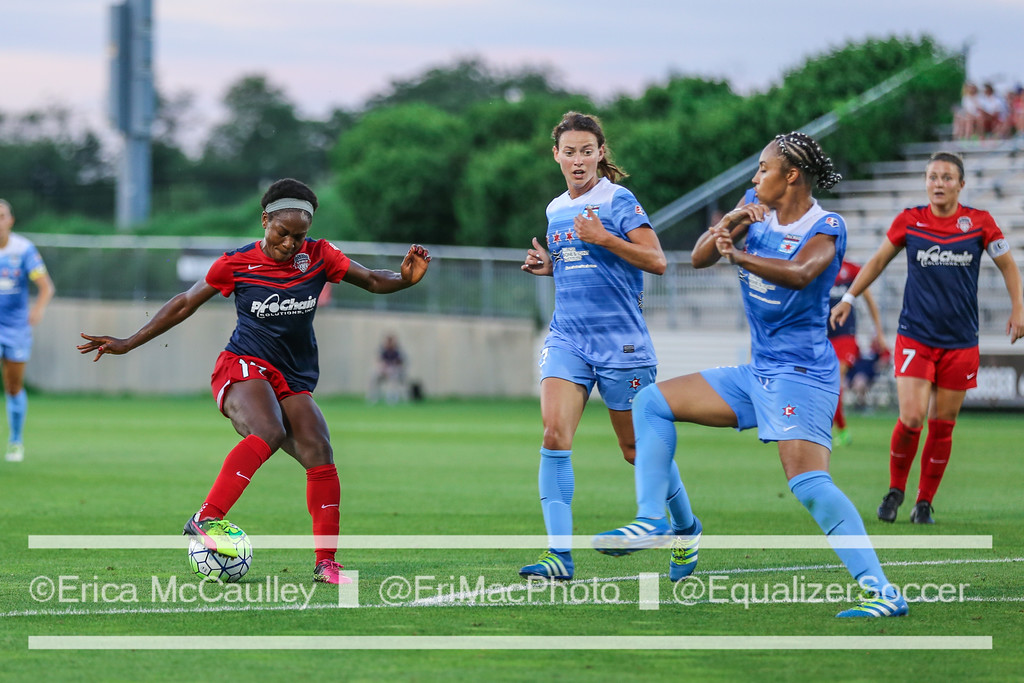 Anyone who’s ever suffered a chest injury knows the pain. It hurts to breathe, cough, drive a car, laugh too loud, get out of bed or even, God forbid, sneeze.

So when Chicago Red Stars’ defender Taylor Comeau exited last week’s match coughing up blood after a nasty collision with Washington Spirit midfielder Kristie Mewis and taken directly to the hospital in an ambulance, it was reasonable to expect she’d be out of action for a number of weeks.

Yet Comeau returned to training last week only four days after the injury and, amazingly, managed to work her way back to full participation in practice sessions by the end of the week. On Sunday she completed the remarkably short comeback, coming on as a second-half substitute for Chicago in their 2-1 win over Sky Blue FC.

“I had to ease into the week,” said Comeau, speaking to The Equalizer after the game. “It’s not your typical injury. I just had to slowly get back in. I was fully in practice Wednesday and trying to make sure nothing got worse.”

Me: mild pain, halts all exercise for weeks
Taylor Comeau: literally coughing up blood, back on the pitch 1 week later#CHIvNJ

The original injury happened in the 64th minute of the Red Stars’ home match against the Washington Spirit, when Comeau went to ground to win a challenge against Mewis. Tripped up in the tackle, Mewis’ momentum carried her forward, and she fell hard on Comeau, who lay completely exposed on the ground.

I think this is what caused injury to Taylor Comeau. When she fell, her arms were above her head and Mewis came down right on Comeau’s side. pic.twitter.com/VmANW0B27c

Surprisingly, Comeau didn’t come out of the game at that point and even fought through a series of tough challenges with Washington’s Caprice Dydasco just a few minutes later. However, in the 78th minute, struggling to breathe and coughing up blood, Comeau finally needed to exit the match.

Sunday’s appearance marked the seventh of the season for Comeau—this time in the midfield after a number of games this year at outside back. After the match, Dames complimented her effort and versatility.

In 2016 Comeau played primarily as a midfielder for the Red Stars, but this year Dames has worked on converting her into an outside back—a move that has paid dividends with Arin Gilliland’s injury woes.

During Chicago’s preseason tournament in Portland, the coach lauded her competiveness and explained her potential to develop into a top professional defender.

“Her ability to defend 1v1, her athletic qualities—she’s going to be a legitimate, big-time back in the league, just like Casey [Short], just like Arin [Gilliland],” said Dames in March. “She’s probably better out of the air than those guys, too.”

This week Chicago is in the middle of its most difficult stretch of the season, playing three matches in just seven days.

And while Comeau admits that she still isn’t 100 percent—”I’m definitely sore,” she said—Chicago will certainly be able to use her energy and resilience to help them through road matches this week against Seattle and Orlando.

Monday Morning Wakeup: NWSL Week 10
Ohai out for rest of 2017 with torn ACL