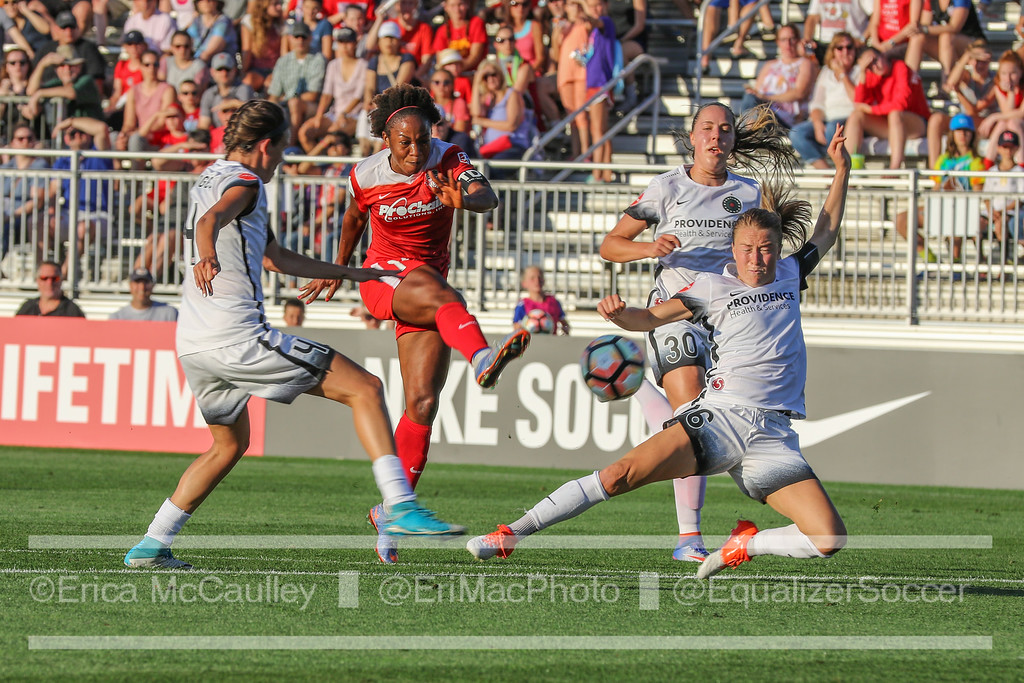 Francisca Ordega fires off the shot that would lift the Washington Spirit over the Portland Thorns. (photo copyright EriMac Photo for The Equalizer)

Francisca Ordega’s first-half strike proved to be the difference in a 1-0 victory for the Spirit. Washington are now riding a three-game unbeaten streak, while Portland has dropped two in a row. Here’s a look at some of the takeaways from last night’s contest at the Maryland Soccerplex.

Washington’s defense has stabilized after defaulting to a four back with Kassey Kallman re-inserted into the lineup as left back. For the past two games, the team has held its shape well and managed to push a lot of its opponent’s offensive forays out wide, away from the area of the pitch where they can do the most damage.

Of course it wasn’t perfect, but the team seems to have a better understanding of when to press, when to cover, and overall how to maintain its defensive shape better.  A team that was previously forcing Stephanie Labbé to make a highlight reel full of fantastic saves every match, seems to be solidifying. Last night, they held the Thorns to three shots on goal, while managing double that themselves.

After the game, Head Coach Jim Gabarra commented on the team’s defense, attributing its strong showing the last two weeks to personnel starting to jell.

“I think we did a very good job of team defending and understanding zones and lines, and it started last game in Chicago,” Gabarra said. “I think it got a little bit better tonight, but it’s something you know that comes from playing together, same group, same players, getting an understanding defensively of each other, and I thought Steph did a great job last game of taking care of the space in behind her backline.”

It will be interesting to see if the Spirit can continue the upward swing defensively, especially with Marta coming to town in two weeks.

What’s Up With the Thorns?

Before last night’s game, Coach Mark Parsons discussed the importance of getting a fast start. Suffice it to say, that didn’t happen. The visitors found themselves behind after less than 20 minutes and were inches away from being two nil down after Havana Solaun’s well-taken shot hit the post.

Parsons’ succinct statement summed up the night rather well for the visitors.  In truth, Portland’s offense looked uninspired. Often they settled for long balls rather than attempting to break down the Spirit defense. Even with sublimely skilled Tobin Heath out, a team as talented as the Thorns shouldn’t struggle this mightily with finding the key to break the Spirit’s backline.

In truth, the Thorns star-studded midfield of Lindsey Horan, Allie Long and Amandine Henry often looked disjointed and struggled to establish a rhythm. Their counterparts, on the other hand, especially in the first half, were successful in stymieing the Thorns attack with some timely takeaways. Perhaps this midfield issue played into the Thorns’ unsuccessful offensive strategy.

While the Thorns held a decisive advantage in possession, it didn’t feel that way watching the game. That’s something they’ll need to address before Wednesday’s match against FC Kansas City.

Franny Ordega Playing for Something More

Rewind two years and Franny Ordega seemed to be turning a corner. She scored her first NWSL goal,  a game winner just before full time against Sky Blue, and was off to Canada to represent Nigeria in the World Cup. But the Ordega that left Maryland that June wasn’t the same person that came back later that summer.

Shortly after Nigeria’s World Cup ended, Ordega was dealt a hard blow when her sister suddenly died. After a trip home, Ordega was back stateside left to deal with a painful loss thousands of miles from home. She’d notch two more goals for the Spirit that season but just seemed to lack the bite that makes her one of the most exhausting forwards to square off against in the league.

In July of last year after a win against the Red Stars, Ordega spoke about how difficult the 2015 season was for her.

“I lost my most lovable sister after the World Cup. It was difficult for me emotionally. Mentally I was seriously down,” Ordega said. “I promised myself this year I would love to make a difference. I need to keep that in my mind and move forward and think about my career as well….”

Ordega would make a difference that season, scoring the game-winner in the Spirit’s semifinal victory over the Red Stars. This season,  the Nigerian international has already surpassed her goal total from each of the last two seasons with four and earned NWSL player of the week honors for her efforts in the Spirit’s first win of the season.

Following the Spirit’s victory over the Thorns, an emotional Ordega said she dedicated her goal last night to her sister on the eve of the second anniversary of her passing.

“My sister died on the 25th of June 2015 after the World Cup, so tomorrow is going to be her second year since she left us. So I’m like, if I can play my best today and score, definitely I’m going to dedicate the goal to her. I think her spirit, everything just keeps me going. I have to do it so she can be proud of me and make myself happy,” Ordega said.

In truth, Ordega’s words last night are a reminder that we don’t always know players’ motivations for playing or their struggles outside obvious injuries or scoring slumps. Grief is a process often with ebbs and flows, much like the game of soccer. If the sport helps Ordega find some solace, it truly is a beautiful game.