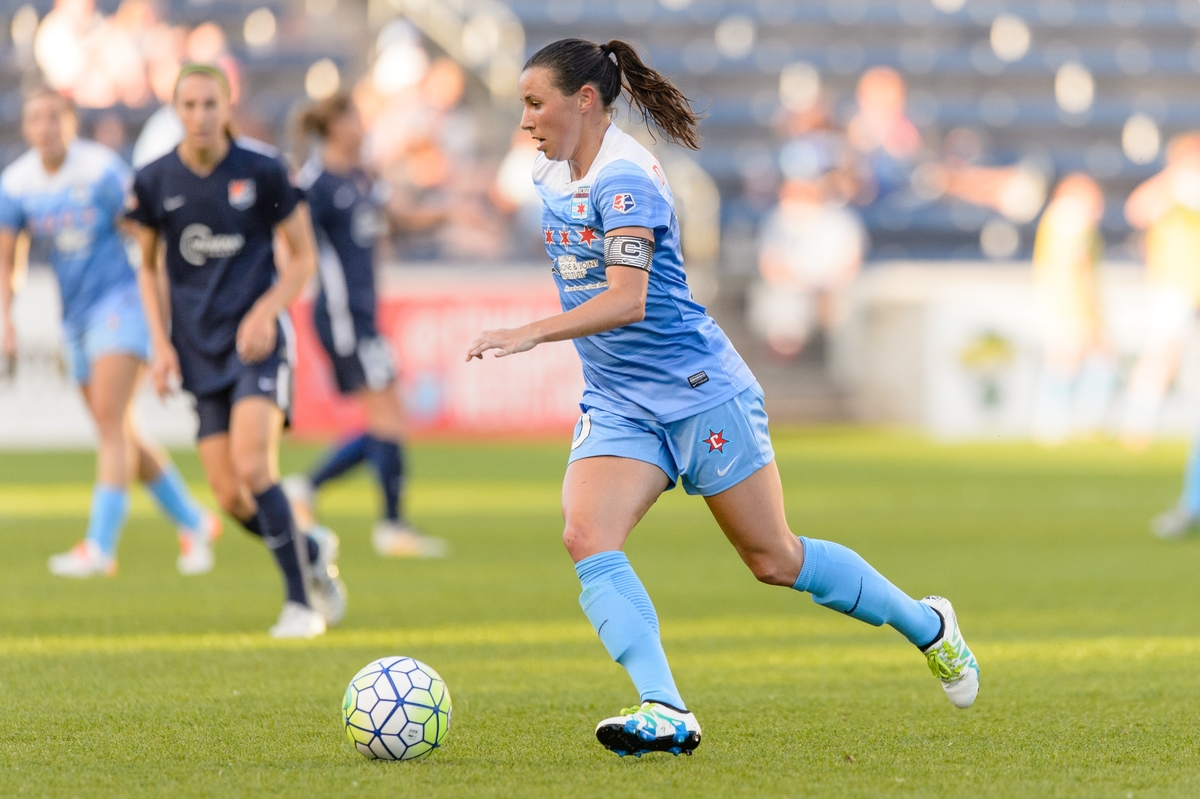 The Chicago Red Stars (6-2-2, 20 points) went down a goal early, but a second-half resurgence was enough to beat Sky Blue FC (5-5-1, 16 points), 2-1. Sky Blue struck first and struck early, with rookie Madison Tiernan scoring on a set piece just three minutes into the contest. However, two second-half goals from Vanessa DiBernardo and Sofia Huerta saw the Red Stars remain undefeated at home and securely in second place on the table.

Entering today’s match, the Red Stars sat in second place in league standings with 17 points, trailing the top-ranking North Carolina Courage by seven points. Sky Blue was right behind them in third place with 16 points. Although neither team could overtake the Courage in the top spot on the table, Sky Blue could have jumped ahead of the Red Stars in the the standings. However, history was not on the New Jersey team’s side, as they have never defeated the Red Stars in over four seasons of NWSL play, a statistic that would remain in place after today’s meeting.

Sky Blue—who it’s worth noting, was without Kelley O’Hara today, possibly to rest at the start of the team’s three-games-in-eight-days stretch—started out the match with the upper hand. Just minutes after the opening whistle, McKenzie Meehan battled with Sam Johnson for possession near the Chicago endline before the ball rolled out, resulting in a Sky Blue a corner kick. Taylor Lytle took the corner, and rookie Madison Tiernan got airborne to head the ball past Alyssa Naeher to put Sky Blue up a goal in the third minute. The goal is Tiernan’s first of her professional career.

Despite Sky Blue FC coming out hot and scoring early, much the same way the did in last week’s 3-1 win in Portland, Chicago gradually took control of the first half. Jen Hoy, Christen Press and Casey Short all attempted to level the score but, as is often the case with the Red Stars, their biggest enemy was poor finishing. Hoy, in only her fourth start this season, led the Red Stars in shots in the first half and had two really solid attempts on goal but failed to finish each time.

The first of those two attempts happened after Press gained possession and made a breakaway into space. Press then played the ball to Sofia Huerta, pushed back into the midfield today, who sent a high cross near the far post, where Hoy was running. Hoy jumped and got her head on the lofted ball, only to send it inches wide of the near post. Hoy’s second attempt came 10 minutes later when she found a loose ball at her feet. She quickly turned and fired off a shot, but it was again just wide of her target.

Although an equalizer remained elusive in the first half, the Red Stars entered the second half with the same momentum they finished the first with, and it wasn’t long before Sky Blue goalkeeper Kailen Sheridan really began to be tested. Alyssa Mautz, who entered the match at the half, nearly scored after attempting to chip the ball over Sheridan, but the Canadian keeper made a spectacular save to knock Mautz’s shot wide.

Sheridan would not be as lucky just moments later, when Vanessa DiBernardo put a shot on frame. Christie Pearce passed the ball up to Sarah Killion, but DiBerardo read Pearce’s pass and out-muscled Killion to gain possession. She then moved the ball into space and, just before Pearce could shut her down, sent a rocket of a shot from outside the 18 that sailed out of Sheridan’s reach and into the upper 90.

Sofia Huerta would put the Red Stars in the lead and score the game-winning goal just four minutes later, with Casey Short tallying the assist. Short used her speed and skill to move the ball down the left flank before sending a cross in to Huerta, who had two Sky Blue defenders on her back. Huerta settled the ball, turned, and perfectly timed her shot to beat both defenders and Sheridan with the ball. The patience, timing, and skill of the shot was mildly reminiscent of the goal she scored in Week 6 against the Courage that earned her Goal of the Week honors.

67′ – #CHI Goal – What a finish by @schuerta who finds a seam and fires a shot into the side netting. #CHIvNJ pic.twitter.com/F3ZFsjtZDx

Just as the game shifted when Mautz entered for Chicago at the half, it again shift, this time in Sky Blue’s favor, when another substitution was made. In the 74th minute, Danielle Colaprico, who seemed to be shaken up after attempting to prevent Daphne Corboz from gaining possession, sat down on the field, where trainers came on to treat her. Two minutes later, she was assisted off the field, putting no weight on her left leg, and Taylor Comeau entered for her. Without Colaprico’s commanding presence on the field, Sky Blue began to gain a little more momentum, but they never could capitalize on it. At the final whistle, they were still trailing by a point, and Chicago walked away the victors.

Both teams have little turnaround before their next matches, as both return to the field on Wednesday night. Sky Blue returns home to Yurcak Field to host the Orlando Pride with kickoff at 7 p.m. ET. The Red Stars embark on a four-game road stretch, traveling first to Seattle to take on the Reign. Kickoff for that match is 10:30 ET.