If you’re getting a sense of déjà vu, it’s because three of these matches are the same as last week. With all their cards already on the table, it’s up to the coaches to decide if tactical shifts can change the results or if they just want more of the same. It’s a week of rematches in NWSL Week 10.

Chicago hasn’t lost since April, but it took a late penalty kick last week to keep that streak alive. They struggled to string together passes and create in the final third. They also proved vulnerable to counters, which are Sky Blue’s bread and butter. The defense will want to avoid getting caught high on the flanks, as Sky Blue boasts tons of speed. Look for Julie Ertz to closely mark Sam Kerr, who seems to be involved one way or another in nearly every Sky Blue goal. The Red Stars will also want a little more creativity from Christen Press and Sofia Huerta.

Sky Blue will look to get the monkey off their back in this match – they haven’t beaten Chicago since the days of the WPS. However, they’re coming off a strong match in Portland in which they pounced whenever given an opportunity. Sky Blue can be disruptive and scrappy, which Washington proved is effective against Chicago. Their backline needs to remain tight and be aware of Press hovering on their shoulders, ready to break and test Kailen Sheridan, who has been excellent in net. They also need a stronger game from Kelley O’Hara, whose play last week was notable more for her aggression than anything else.

Although the story around Killion this season has been her penalty kicks, made, saved, and missed, what you should be paying attention to is her play on the field. She’s one of the most effective defensive midfielders in the league, solid whether she’s breaking up attacks or starting one of her own.

The left back has no only been Chicago’s best defender, she’s one of their best players, and when she gets forward she provides width that the Red Stars otherwise lack. She’ll also be needed to contain O’Hara.

Keep an eye on:
• Stephanie McCaffrey, whose minutes have dwindled to almost nothing
• Mandy Freeman, quietly efficient next to Christie Pearce

The Dash have proven to be key for Orlando; while they 5-15-4 all time elsewhere, they’re 4-1-0 against Houston. They had little problem dispatching Houston on their home grass last week. Their four goals came in nearly every form they can in soccer except from the spot. Look for Ali Krieger to set another high defensive line like the one that caught the Dash offside six times last week, but they may want to consider tightening up, as the Dash led the stats in shots, shots inside the box, and crosses, leading to two late goals. Closing out games has been a Pride problem all season, and should the Dash scrape together a better start than last week, late sloppiness could be a big problem.

The Dash never really looked to be in control of the game, and whether that’s a lack of fitness (as Carli Lloyd says), frustration, or whatever lassitude has plagued Houston since opening day, they’re already on the verge of falling so far behind they have no chance of catching up. The loss to Orlando equaled last year’s six-game losing streak. To change the narrative, they have to start keeping out goals. Marta and Camila found all sorts of space in the Dash defense, so Amber Brooks would do well to break up more plays before they get to the centerbacks. Elsewhere, the Dash have the capability to do damage in transition if they can restart play quicker and take advantage of their speed. Finally, they need to press hard and not allow the Pride so much time on the ball.

Keep an eye on:
• The Krieger-Lloyd battle, which proved entertaining last week

Last week I said that Boston entered their match down on their luck. A 3-1 drubbing later, they’ll now be without their starting goalkeeper as they face North Carolina for the third time this season already. It’s baptism by fire for Sammy Jo Prudhomme, who is expected to get her first professional match after Abby Smith’s knee will sideline her for at least one week. Prudhomme will have the task of attempting to solidify a defense that despite the return of Megan Oyster was carved up like a Sunday roast by the Courage. They’ll also be without Rosie White due to yellow card accumulation. While Boston had higher possession and passing numbers than North Carolina, they didn’t do much with it, only getting two shots on goal. They need to speed up their play and decision making and avoid giving up the early goals that have doomed them for three games in a row.

If you only looked at the scoreline after the game, you might not have known the Courage were without Lynn Williams and Jess McDonald, as Kristen Hamilton and Ashley Hatch took their places without missing a beat. Williams may be back, but McDonald is expected out for a bit longer, so Hatch and Hamilton will battle it out for the starting spot. The Courage have stronger width than the Breakers, so look for Jaelene Hinkle and Taylor Smith to be heavily involved in the attack. Regardless of the results of any game, the Courage will retain the top spot on the table. Also note the Courage (and Flash before them) have never lost in Boston.

Keep an eye on:
• Who Beard looks to to start for White
• McCall Zerboni, who is excelling as the Courage’s midfield enforcer 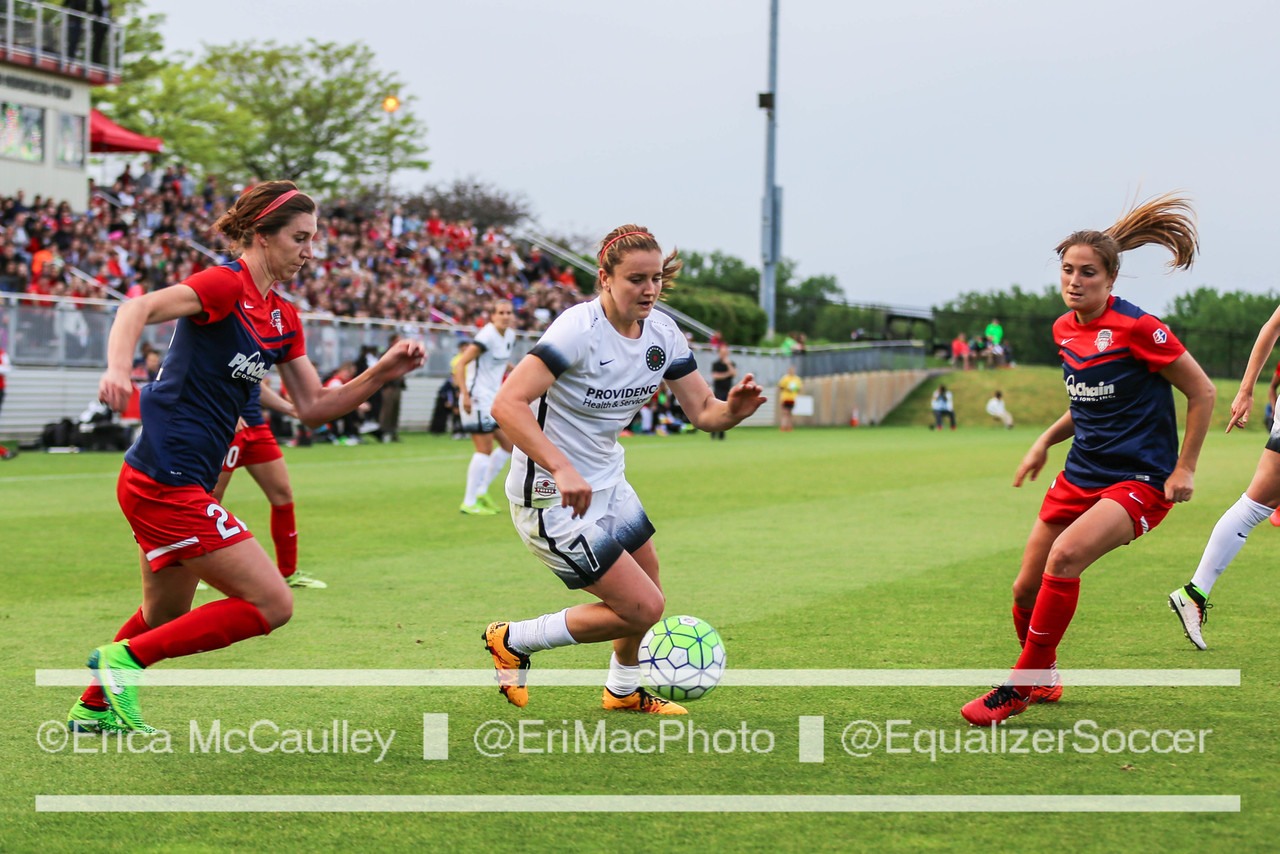 Washington surprised nearly everyone last week by ending up only a silly Shelina Zadorsky mistake away from taking three points in Chicago. They did a tremendous job of breaking up plays and forcing the Red Stars into easily handled shots from distance. One thing to keep an eye on is how much space Stephanie Labbé is being asked to cover, which seems tailor-made for someone like Christine Sinclair to exploit. The Spirit need to deny the Thorns time to build up play and particularly watch Amandine Henry, who is having a stronger sophomore season than her first.

Portland is likely licking their wounds after a 3-1 drubbing by Sky Blue in which the Thorns had the larger share of possession, as they prefer, but couldn’t do enough with it. They were beaten over the top more than once, and with a player like Francisca Ordega running at their backline, they need to be aware of that threat. They’re likely to get a boost from Ashleigh Sykes, who made her debut last weekend and should be a threat out wide as she settles in. Portland is also working Dagný Brynjarsdóttir back into the mix.

Keep an eye on:
• The Williams-Ordega partnership
• Adrianna Franch, whose poor decision allowed a goal

Merritt Mathias was back in the XI last week,
and also renewed her rivalry with FCKC’s Shea Groom. (photo copyright EriMac Photo for The Equalizer)

It’s likely neither Seattle nor Kansas City were all that pleased about last week’s draw, although for the Reign, a point on the road is always welcome. They’ll have the chance for a redo in their home stadium, where they are usually stronger. The Reign seem to march to the barometer of Jess Fishlock – when she’s at her best, so are they, so they want one of her aggressive, energetic matches in order to put a few past FCKC’s staunch defense. Lindsey Elston and Bev Yanez in midfield with Merritt Mathias up top may not have been the answer to the absence of Rumi Utsugi, but unless Christine Nairn, largely ineffective this season, picks it up I’m not sure the Reign bench has anything else to offer.

While Kansas City scored two goals, neither were from players who are likely to become the team’s top scorers. If Sydney Leroux and Shea Groom remain absent from the scoreboard, Vlatko Andonovski will have to figure something else out up top. A bright spot for Kansas City was Erika Tymrak, who in her first start of the season created the most chances and led the team in tackles. Seattle’s defense is vulnerable to speed, so FCKC may want to try slipping Groom in behind, while Leroux is more suited for running at the backline.

Keep an eye on:
• Nairn’s minutes – the erstwhile starter was left out of the XI last week
• Who gets the nod between Alexa Newfield and Brittany Ratcliffe

{Read More: Internationals Get It Done}