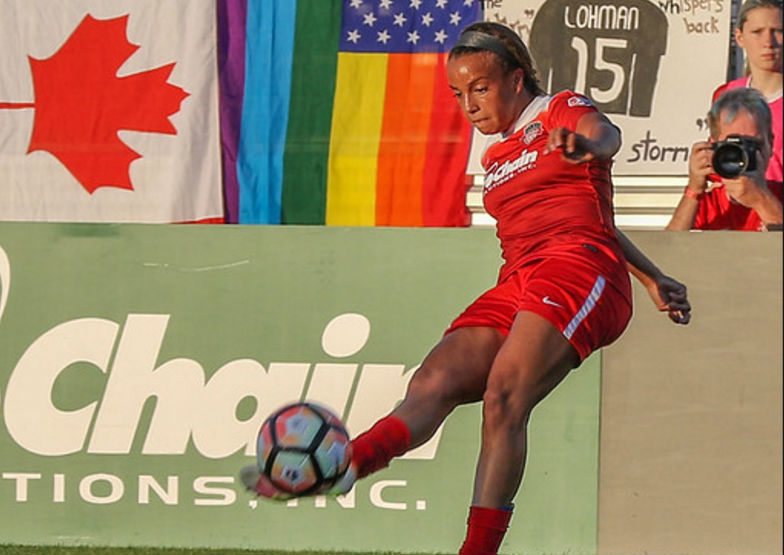 It’s another week in WoSo, which means it’s another edition of my Friday Favorites, more positive stories from around the league. Although there doesn’t seem to be as much grumbling surrounding the women’s game this week (go90 streaming issues aside), I’m not so sure that’s a good thing. Instead, I’m afraid it’s a sign of a bigger problem the league is experiencing this year, and that’s apathy.

Streaming issues are likely a factor in that, in that fans can’t support a league they can’t watch. However, Lifetime’s Game of the Week between the Chicago Red Stars and Washington Spirit drew 110,000 viewers. Not too shabby at all, especially for a game that lacked excitement and the draw of the league’s newest star, Mallory Pugh, who was sidelined with an ankle injury from the Spirit’s first appearance on Lifetime since her signing.

Low attendance numbers have been a talking point on and off this season, but attendance numbers this last weekend weren’t all that bad. The lowest attendance in the league was 1,891 in Kansas City, but North Carolina and Chicago both had over 3,000 fans, and Houston had just under 6,000. Yes, all of those numbers could be higher, and Houston’s could be chalked up to it being Carli Lloyd’s first game back with the Dash and because Marta was in town. But I think it’s more encouraging than not.

Here are some other positive stories from around the league.

As I have previously written about in other editions of Friday Favorites (I know, I know…stick to sports), the NWSL is known for its inclusivity, especially towards LGBT fans, players and even coaches. The biggest example of this is the number of Pride nights held around the league during the month of June. Although these have been happening for almost as long as the league has been in existence, it’s this year’s first-time Pride events that have really taken the NWSL’s Pride game to the next level.

For the first time ever, FC Kansas City had a Pride night, Out at Swope, albeit a month early. North Carolina FC midfielder Austin da Luz started Playing for Pride, which since it’s inception has seen 10 NWSL players from five different teams join the campaign. Sky Blue FC changed their Pride night to a Pride month, and both home games in the month of June will be Pride themed.

Much like Sky Blue, the North Carolina Courage decided to do more than just a Pride night, opting instead to do a Pride week. In conjunction with their brother team, the NASL’s North Carolina FC, the Courage held different events in the days leading up to their Pride game against the Boston Breakers. One such event was celebrity bartending, where Courage players Taylor Smith and Abby Dahlkemper made drinks, mingled with fans, and assisted with Pride giveaways. A number of players also posted images to social media of them wearing t-shirts emblazoned with the word Equality across the chest before Saturday’s Pride game, showing their support for the cause.

On the West Coast, the Seattle Reign teamed up with the other professional sports teams in the city to host four back-to-back Pride nights. The effort was a joint endeavor with Athlete Ally, a nonprofit organization that promotes inclusion in sports and for which a number of past and present NWSL players—including current Reign players Megan Rapinoe, Lauren Barnes and Madalyn Schiffel—have been pro ambassadors. The Seattle Sounders kicked things off with their Pride night on Wednesday, with the Reign wrapping things up with their Pride night on Saturday. Although the Reign are by no means first timers when it comes to hosting Pride nights, this is the first time the team has participated in such a large-scale, city-wide Pride endeavor.

Moving back to the East Coast, Saturday night is also Pride night at the Maryland Soccerplex. The Spirit Squadron, the official supporters group for the Washington Spirit, are hosting their fourth annual Pride night. However, this year things are a little different, as the team itself has been helping to promote the event, surprising many fans from around the league. Not only that, but a portion of the proceeds from ticket sales is being donated by the Spirit to Playing for Pride.

So how did the Spirit get connected with the Squadron’s Pride night? According to Spirit Squadron vice-president Jenn Scott, the team came to them.

“Their marketing person…and [Washington Spirit President] Chris Hummer reached out to us and they had a phone conference with our president Megan [Wesson], and they proposed this idea to help promote and kind of get more people in the stands in our section and that part of the proceeds would go to Playing for Pride, which definitely made us quite intrigued and really excited,” Scott said. “It was initiated by them, which was a nice surprise.”

Hummer said the he decided to approach the Squadron about the team helping to promote their Pride night after seeing the group’s banner about it at the Spirit’s June 3 home game against the Houston Dash. Knowing that several Spirit players—Kristie Mewis, Katie Stengel and Joanna Lohman—are currently supporting Playing for Pride this season, Hummer and the team decided to support both those players and their supporters group at once.

In case you haven't heard… pic.twitter.com/IGw04ZjQeG

“The first thing we did was just to say, ‘How can we help you sell more tickets?’ And then when I combined that with a motivation to try to help something or a group…we decided to go ahead and donate as well, to try to help out what our players are doing and to help support everybody,” Hummer said.

For every ticket that the team sold through the Spirit Squadron Pride Night link on Fevo before Friday at 3 p.m. ET, five dollars will be donated to Playing for Pride, which benefits the Human Rights Campaign. Not only that, but Hummer said the Spirit players would also be wearing the Nike Equality shirts during warm-ups.

For Scott and the rest of the Squadron, they are excited about the team getting involved with their Pride night for the first time, helping them to take it to the next level and, possibly, reach out to some new fans.

“I think our mission as an organization, our group, is to make everybody feel welcome and supported and celebrated, and we have a large number–myself included–of people involved who are LGBT, and we have a number of folks who aren’t, and they were passionate about making everyone feel like they belonged,” Scott said. “If I were a new fan and I heard that a group or a league was really very, very inclusive, I think it would make me spend my money to support that league. In fact, I know it would.”

Schedule of upcoming Pride events around the league:

Sam Kerr flips out over goal

One of my favorite things about soccer is a good goal celebration. The more creative or dramatic, the better. To me, it makes the game more fun and is an indication that the players themselves are having fun on the field. A game where the players are noticeably having fun is one that is more fun for me to watch.

Until Week 9 when Sam Kerr scored a brace in Portland in a NWSL Player of the Week-winning performance. After scoring her breakaway goal in the 70th minute that also saw her nominated for the league’s Goal of the Week, she flipped out…literally. Bringing back a goal celebration that NWSL fans haven’t seen from Kerr in a while, the Australian forward followed her first goal against the Thorns with a roundoff-backflip tumbling pass.

But she wasn’t done yet—with the scoring or the goal celebrations. In the 88th minute, Kerr struck again, using her pace to beat Portland’s backline to a ball that was sent over the top. As goalkeeper Adrianna Franch came off her line, Kerr maneuvered the ball out of her reach to get a look at a wide open goal. Blasting an easy shot into the back of the net, Kerr once again took to celebrating, this time channeling her inner Lebron James to do so.

It was clear that Kerr was having fun Saturday night, and her goal celebrations made the game more fun for those watching from home. Although some fans may dislike goal celebrations or think Kerr’s were cocky or goofy, I personally enjoyed them. More goals and celebrations like that, and a league currently surrounded by apathy might be injected with some much-needed life and energy as the season nears the halfway point.