With college behind her, Lauren Kaskie focuses on pro career 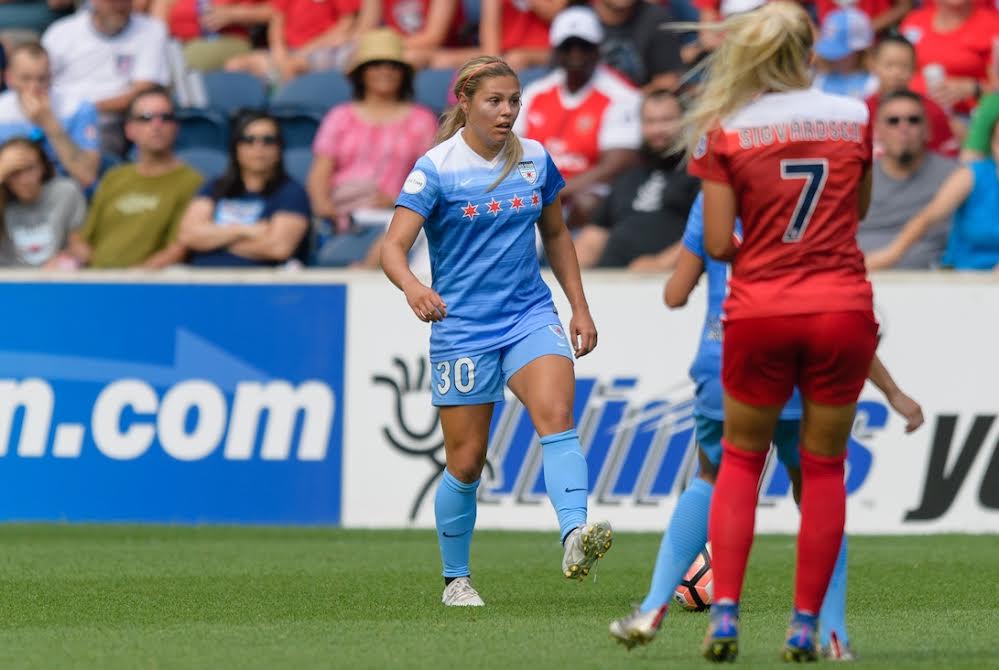 Lauren Kaskie made her pro debut on Saturday after walking in UCLA’s graduation ceremony on Thursday. (photo by Dan Bartel, ISI Photos)

Lauren Kaskie had herself quite the three-day stretch last week.

On Thursday, she graduated from UCLA before catching an early flight Friday morning back to Chicago for training. Then, on Saturday afternoon, she made her professional debut, coming on in the 79th minute for the Red Stars, who were trailing the Washington Spirit by a goal when she entered the match.

“[I was] a little nervous, a little excited,” Kaskie told The Equalizer after the match. “We were down 1-0, so that was a little more heightened pressure, but overall it’s awesome to get a debut.”

Congratulations to our 2017 graduates! We are so proud of you all! #UCLA2017 #bruinsforlife pic.twitter.com/f7e0vxOErY

Chicago went on to tie the match only three minutes after Kaskie entered and picked up the point at home. In the tunnel after the match, Kaskie’s play drew praise from head coach Rory Dames, who complimented her passing and explained how his rookie has progressed in the past few weeks.

“Lauren’s done really well in training,” noted Dames. “Somewhere in the next three games, Lauren will go into the first XI and get a run-out.”

Kaskie’s debut came as a bit of shock, considering Chicago trailed in the match and veteran attackers Jen Hoy and Stephanie McCaffrey were still available on the bench when Dames called her number. However, this spring Kaskie has been surprising observers in a number of ways.

Chosen with the second-to-last pick in the 2017 National Women’s Soccer League draft, few thought she’d even make the roster this year in Chicago. After all, of the 31 players the Red Stars had in preseason camp, the team returned 19 players from a 2016 squad that had made the playoffs for the second straight year.

Nevertheless, Kaskie defied expectations, moving ahead of several Red Stars’ veterans to earn a professional contract and spot on the final roster.

“Drafted [high] or not, everyone has to fight for a roster spot,” Kaskie explained. “Coaches have predetermined decisions, but at the same time, you have to show [your ability] daily. At any given point, you have to produce. At the end of the day, I was coming in here to earn a spot, and that was my mindset.

“It was an honor to be drafted by Chicago because they only pick up quality players. That was a compliment in itself.”

While Kaskie never earned a consistent starting role in her days at UCLA, she did help the Bruins to a national championship her freshman year. Dames believes she fell through the cracks at Westwood, and he took advantage of Kaskie’s relative low-profile to nab her at the end of the fourth round of the draft.

“She fell under the radar a little at UCLA,” said Dames. “The staff that recruited her there wasn’t the staff that finished with her. She was on the U-17 World Cup team, and you don’t get there unless you have some ability. In fairness to Lauren, over the last three weeks, she’s been one of the best 11 players in training.”

Now a third of the way into her first professional season, Kaskie says she’s feeling more comfortable with her teammates in Chicago and is now looking forward to what lies ahead.

“[Graduating] was great. It was surreal. It was one book closing and another door opening.”