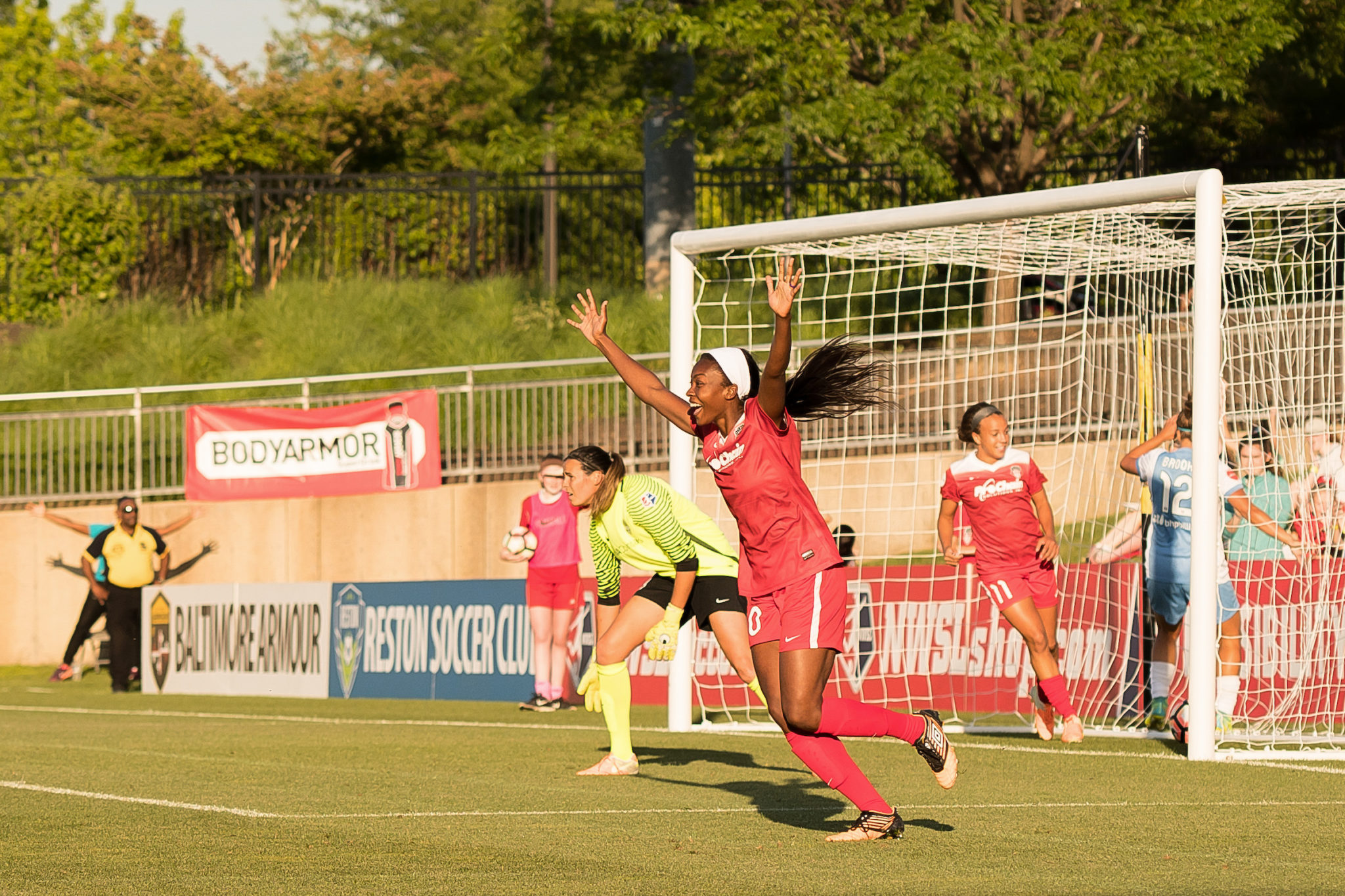 Washington Spirit forward Cheyna Williams has really come into her own in her second straight season with the Spirit and in the NWSL. The Florida State alum has made six starts in seven games for her DC side and recorded her first goal of the year in early June against Houston. I chatted with Cheyna about what it’s like to play for DC, her transition from college to professional soccer, how she spends her free time, and more!

Hannah Kronick: After the late tie last week against Chicago, what’s the mindset going into hosting Portland at the Plex this weekend?

Cheyna Williams: We were a little bummed that we did tie in Chicago because we felt that we played well enough to pull out a win. Since they are the second place team right now, it did give us a bit of confidence knowing we can compete against a really good Chicago team. Hopefully, that momentum can carry on into Portland this weekend. It’s been almost three weeks since we’ve played at home, so it will be nice to be on our pitch and in front of our fans again. We are all really excited.

HK: What’s it like to play for the Spirit? Now that you’re in your second season with the club, anything you can talk about in regards to the organization, club environment, representing the DC-Maryland area, would be great to hear.

CW: It’s been great. It’s always been a dream to play professional soccer in general. To be in a city that I love and to be close to family members has been really nice. To also be in the nation’s capital is great to be able to live here every day. It’s always so fun when I have friends or family visit and I can bring them into the city–they’re always so excited. I’ve done the monuments almost 100 times now, but it never loses its effect on you. Living out a pro lifestyle and being with the Spirit has been a dream come true honestly. Being able to wake up every day and play the sport that I love with teammates that are really fun to be around with great coaches has been really nice.

HK: That’s great – and leads me to my next question. Who do you think you’ve learned the most from to date in your professional career?

CW: Well, to be honest, just last year, having so many vets on our team was really awesome. I feel like the vets from last year really took me under their wing and helped me feel like a pro right off a bat. A couple of them aren’t with us anymore, but, I would definitely have to give credit to Crystal [Dunn] and [Ali] Krieger and those girls who are older and more seasoned in the game and seasoned with their national teams. Seeing how they conduct themselves every day was great for me to learn from. The coaching too and the players around me are teaching me something new all the time. I feel like being in this environment, you learn so much. It’s cool to see how the game starts to slow down to you. I think the environment in general, whether it be games or practices, has really helped me learn a lot.

HK: Ah, yes I am sure learning from a Crystal Dunn or Ali Krieger is awesome, as they are some of the best in this business. Moving on, can you talk about the players’ blog that you guys have at the Spirit (Beyond Our Boots)?

CW: Beyond Our Boots is a really cool idea that some of my teammates came up with. I think the initial approach was to give our fans and people in the soccer world another look at our lives, outside of soccer. A lot of the content is about things we like to do like cooking or talking about our family, things like that let people know a little bit more about us off the pitch. We’ve seen really good results and feedback from it. The fans enjoy it. I think it’s funny when people come up to you and say they read something on the blog that they didn’t know about us before. But, it’s also helps us as teammates learn about each other more. So, for example, people didn’t know that Estelle [Johnson] had a ton of siblings. Some people didn’t know that Cam {Castelberry] liked to cook. So, it’s also helped us get to know each other a little better. It’s something else for us to do and have fun with. 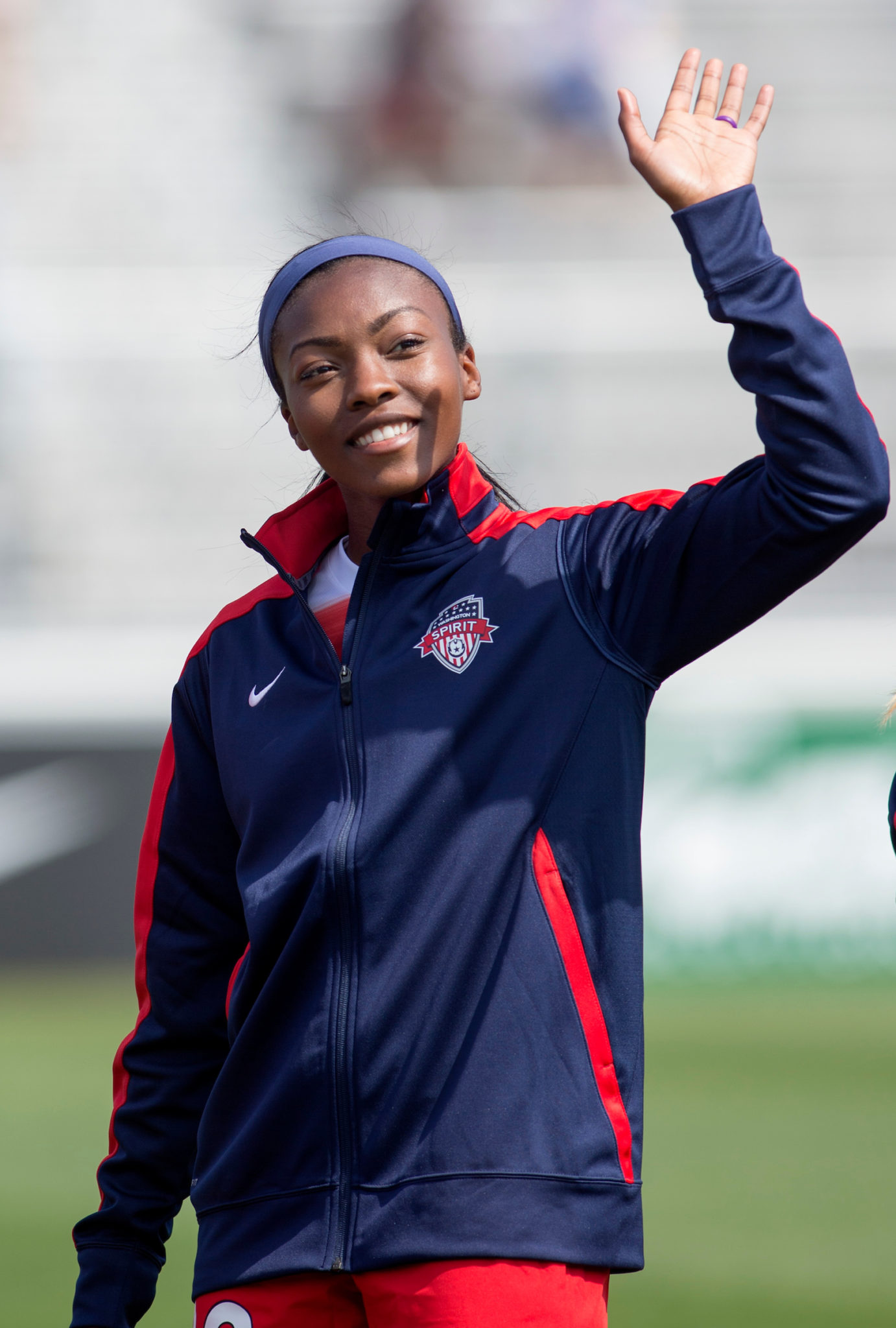 To date, Williams’ has played almost as many minutes in seven games this season as she played in 17 last season for the Spirit. (Credit” Washington Spirit/ISI Photos)

HK: Totally. It’s really cool to see that it’s a new way to interact with fans on a more personal level which is all great for fan base growth. Next up – as a younger player in the league, I’d love to get your take on the one thing that you want to see from the NWSL in the next five years?

CW: I was really excited to see the expansion team last year. Going into this year, I know it was hard to bring in another team, but expansion really is important and seeing more clubs get involved. We’ve already seen women’s soccer grow so much in a short period of time, that I can just imagine how many teams will be in the league or how many more fans will be coming out to games, or even how many of our games are televised in five years. I think team expansion would be the coolest thing to see.

HK: Stepping back a bit to your college days, what was the biggest adjustment you had to make as you left college soccer at Florida State and joined the Spirit to start your professional soccer career?

CW: I think the physicality, the fitness, and the speed of play were the biggest adjustments. If you take the hardest game in the ACC, UVA was our rival when I was there, so you take that game and multiply that game by 10, that’s what the NWSL is. From the outside looking in, you think you are prepared because you’re playing this nice style of soccer in college. At FSU, we had so many international players, the coaching there was very professional, but once, you’re actually submerged in the NWSL, you realize that it’s actually a lot faster and a lot more physical than I could’ve wrapped my brain around. I remember the first training session I had in preseason last year. Everyone on my team was pinging the ball around and I was thinking “oh my gosh I am not supposed to be here, it’s all moving so fast.”  Now, that the game has slowed down for me, I think that was the biggest adjustment for all. Also, knowing that you can’t really take any mental breaks because there are so many good players and you would just get punished for it was another thing to get used to. There’s so much talent, speed, and technicality. Though I will say that my parents and coaches always said when I was younger that I wouldn’t always be able to rely on my speed  when I was older, but it does still help me to this day, so I am thankful for that!

HK: Last one I have for you, outside of soccer, when you have 30 free minutes, what’s the first thing you are doing?

CW: I have a dog and he’s like my BFF. If I get an extra 30 minutes, I am walking him and it’s made me realize how much I love being outside. Now even when I go up to Philadelphia to visit my fiance and he’s not with me, I feel weird not having an obligation to go outside and walk him or play with him. So I will say he is taking up a lot of me time. But, I also like to read!

Cheyna Williams and the Washington Spirit welcome the fourth place Portland Thorns to the SoccerPlex on Saturday with kick off slated for 7 p.m. ET.