Also in today’s roundup, Abby Smith ruled out for Boston this week against North Carolina 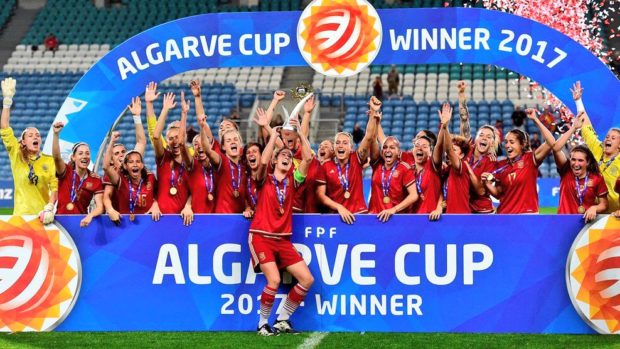 Spain will look to continue their momentum at the international level ahead of the EUROs this summer.

Jorge Vilda, head coach of the Spanish women’s national team, announced his final 23-player roster that will represent Spain at the UEFA Women’s EURO that kicks off in less than a month.

Spain will compete in Group D of the tournament where they will face Portugal in their opening match on July 19, followed by England on July 23, and will close out group play on July 27 against Scotland.

Most recently, Spain shocked many by taking home the Algarve Cup title in their first trip to the tournament after upsetting Canada 1-0 in the final. This marked an impressive start to Vilda’s coaching tenure as he took over for Ignacio Quereda who’d been at the helm for 28 years.

Notably missing from the roster is PSG midfielder and Spanish national team veteran Vero Boquete. She captained the Spanish side at the 2015 FIFA Women’s World Cup, but did not see much playing time at the Algarve Cup this past March.

Lotta Schelin will be one of the veterans that Pia Sundhage looks to lead her team at the EUROs. (Getty Images)

Today, Sweden head coach Pia Sundhage announced the 23 players she has selected to compete for Sweden at this summer’s European championships. This will be the last major tournament for Sundhage as she plans to step down from the helm of the Swedish squad after the EUROs.

After a great performance in Rio 2016, all eyes are on Sweden heading into this tournament. Sweden defeated the USWNT in PKs in the quarterfinals as well as came close to defeating Germany in the final, but ultimately took home the silver medal from the Olympic Games.

Sweden will kick off Group B play on July 17 when they take on Germany, a re-match of last summer’s gold medal match in Rio. After that, they will take on Russia on July 21 and round out group play against Italy on July 25.

Abby Smith ruled out this weekend for Boston

The injury hits continue to keep coming for Boston Breakers this month as goalkeeper Abby Smith has been ruled out for this weekend’s game against the North Carolina Courage. Her knee reportedly flared up and the team is managing the injury.

Abby Smith has started and played in all nine games this season for Boston and her play has really anchored the Breakers defense this year.

Hi Boston fans. Abby Smith out this weekend against NC. Knee flared up, team is managing it. #nwsl

Smith’s absence means the Breakers will be without four players often in their starting lineup as Rose Lavelle and Allysha Chapman are also both out with injuries sustained while with their respective national teams during the FIFA window, and Rosie White will be serving a one-game suspension for yellow card accumulation after picking up her fifth caution last Saturday against the Courage.