Eight Orlando Pride game times have been changed as part of the league’s push to avoid playing in extreme heat. (photo by Allison Lee)

The NWSL announced today that, in an effort to increase player and fan safety, the kickoff times for 23 games had been changed to be at a time of day less likely to affected by extreme heat, humidity, and solar radiation.

At the same time, the league announced that it was implementing increased procedures for hydration breaks and new guidelines for extreme heat including match delays, both of which are immediately in effect. The full list of new guidelines can be found here.

“The safety of everyone involved with the execution of NWSL matches, including players, referees and fans, is paramount,” NWSL Managing Director of Operations Amanda Duffy said. “These are important measures that will help to ensure the safest environment possible at all league matches, and we will continue to evaluate steps that can be taken in the future.”

Although the league did not come right out and say it, today’s announcement is in direct response to the extreme heat in Houston during the May 27 Lifetime Game of the Week between the Dash and Seattle Reign. The heat was a major factor during that game, with the heat index putting temperatures at over 100 degrees Fahrenheit.

Even with hydration breaks, the heat took a visible toll on the players who were much more fatigued and sluggish by the ends of both halves. Rachel Daly suffered the worst of it, collapsing from heat exhaustion in the final seconds of the match. The criticism from coaches, players, and fans alike resulted in the league examining the situation and implementing the new measures announced today.

The vast majority of games affected by the new kickoff times are scheduled Lifetime Games of the Week. Those games now have a start time of 3:30 p.m. ET with kickoff being scheduled for 3:50 p.m. ET to allow for the hydration breaks. Lifetime has a very strict 6 p.m. cut off time, whether the game has ended or not. Therefore, an earlier kickoff time helps ensure the match will be over by the cut-off time while still accommodating for the hydration breaks in the event the weather conditions necessitate them.

The new kick off times also means that games previously scheduled as backups for the Games of the Week were given more leeway to reschedule kickoff for times for later in the day when temperatures are cooler. That means that, for several weekends, there is no longer a backup Game of the Week scheduled. 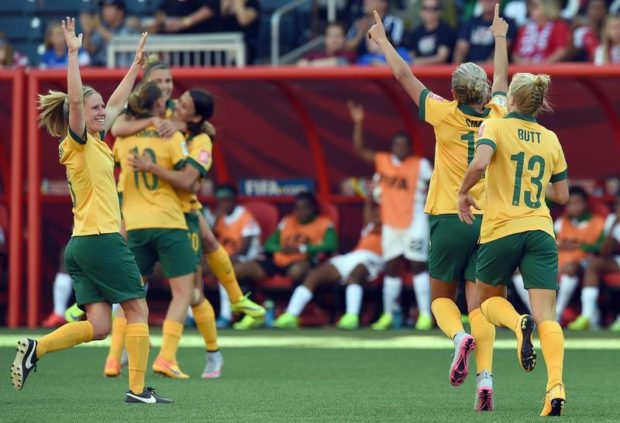 On Tuesday Australia is set to announce their bid to host the 2023 Women’s World Cup, backed by up to $5 million in government funding. The federal government has already earmarked $1 million in funding to help the nation land the world soccer event. They have offered an additional $4 million if FIFA deems that Australia meets its initial standards for a host nation.

The bid for the 24-team tournament would name six cities as host venues, including Sydney and Melbourne. Other cities that currently field Westfield W-League teams such as Brisbane, Canberra, Perth, and Adelaide are likely to host matches as well.

The most recent Women’s World Cup was hosted by Canada in 2015. The event is said to have brought in almost $500 million in “economic activity” for the nation, far exceeding expectations. Australia is hoping that hosting the World Cup in 2023 will have the same boost to its economy and on the women’s game in the country.

“The benefits to Australia are many and varied with major economic impact to the wider community and, most importantly, a massive increase in exposure and investment in women’s football,” Australian federation chairman Steven Lowy reportedly said.

Australia recently lost out on their $46 million bid to host the 2022 World Cup, which controversially went to Qatar. They are not the only country interested in bidding on the 2023 women’s tournament, as both Colombia and Japan have previously expressed interest as well.

Formal bids will not be made until late 2018, and FIFA will decide the host in 2019, the same year France hosts the next Women’s World Cup. 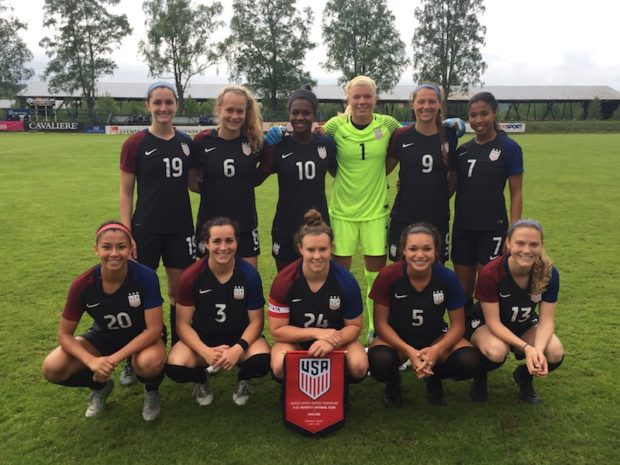 The United States U-23 women’s national team competed in its final match of the Nordic Tournament, finishing in second place behind England. The team remained undefeated throughout the tournament and tied with England in points, but England just edged the U.S. out in goal differential.

The U.S. opened the tournament on June 6 with a rousing 3-0 win over Norway. The team was without most of its professionals, as all U-23s currently playing in the NWSL except for Dani Weatherholt joined the team late after staying with their clubs for their June 3-4 matches. Weatherholt, who was unavailable for the Pride in their June 3 home match against Boston since she had already reported for U-23 national team duty, captained the team in their win against the Norwegians.

Up next for the team was a June 9 match-up against England. Despite five professionals—Jane Campbell, Christina Gibbons, Ashley Hatch, Kristen McNabb and Midge Purce—all starting for the U.S. and Weatherholt subbing in at the half, the team couldn’t find a goal. Luckily, Campbell earned the clean sheet, seeing the game end in a scoreless draw.

The U.S. closed out the tournament today with a 2-0 win over the host nation. Hatch and Jaelin Howell, who recently had her first call up to the senior national team back in April, scored the two U.S. goals to secure the win and three more points. However, it wasn’t enough to also win the tournament, and the U.S. left Sweden as runners-up.

Just days before its spring series commenced, Notts County folded its women’s team, leaving the FA WSL 1 short of a team. Now, Everton Ladies has been selected by the Football Association to replace Notts County in the top tier of the Women’s Super League in the country.

To rebalance the top two tiers of the WSL in the wake of Notts County’s folding so each would have 10 teams, the FA allowed WSL 2 clubs to apply for promotion to the WSL 1. Interested teams had to show how they would meet the additional license criteria and financial demands of competing at the higher level.

Although Everton was chosen for their off-the-field attributes, the team finished at the top of the FA WSL spring series and third overall in the 2016 season. They were said to be the richest FA WSL 2 club, richer than even some of the FA WSL 1 clubs, making them a natural choice for promotion to the top tier.

Goalkeeper Méline Gérard has officially parted ways with Olympique Lyonnais and signed with Montpellier HSC, also of the the French Feminine Division 1 league.

The 27-year-old has served as backup to Sarah Bouhaddi for Lyon since 2014 and for France since 2015, when she made her international debut during the Algarve Cup. In her three seasons in Lyon, Gérard has made 21 appearances and recorded 18 clean sheets.

Although Gérard repeated as treble winner with Lyon this season, the move to Montpellier means an increase in playing time and experience, as she will likely take over the starting keeper position.