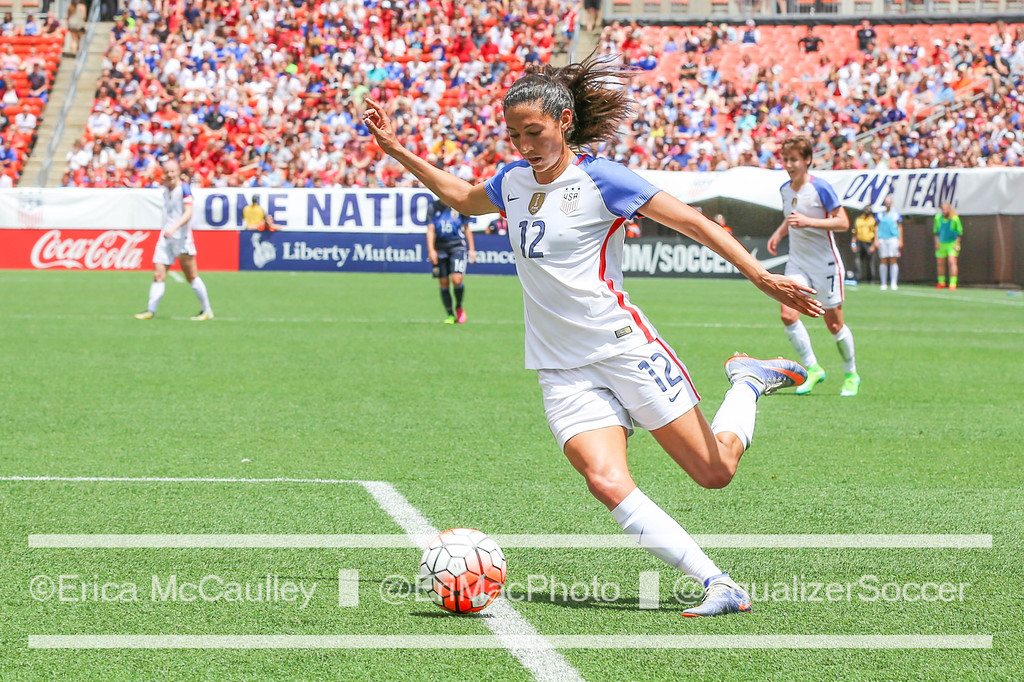 Christen Press’s 60th minute goal was enough for the USWNT to defeat Norway.
(Photo Copyright Erica McCaulley for The Equalizer)

The United States women’s national team narrowly defeated Norway, 1-0, with Christen Press’s goal in the 60th minute being the difference maker. Norway was the better team throughout the match, but as is often the case for the U.S., they were good enough (and maybe a little lucky) and were able to squeak out a win.

The lone goal of the match came right at the hour mark when Becky Sauerbrunn, once again playing the full 90 to continue her streak of playing every minute of 2017 for the USWNT—the only player to do so—played in a long ball from the right flank near midfield. Rose Lavelle attempted to get her head on it, but it was just out of reach, falling instead to Press, who was making a run toward goal. Press caught up to the ball just outside the goal box, where she sent in a hard, low shot that nutmegged Norway’s keeper to go into the back of the net.

Feast your eyes on @ChristenPress' 42nd international goal, but don't sleep on that @beckysauerbrunn pass! ⚽️?

All in all, it was a rather uninspiring performance from the USWNT, especially in the attacking third. Although the poor performance, especially in the attacking third is likely a disappointment for many, it really should come as little surprise considering the team is in full-on experimentation mode as head coach Jill Ellis continues trying to figure out the right personnel and formation for the team. Fans have little reason to be alarmed just yet, as this is a perfectly normal place for the U.S. to be in two years out from the next major tournament.

In comparison, Norway is finalizing its preparations for this summer’s European Championships and, as a result, playing the match as though it were more than a friendly. The Nordic side looked much more composed, consistent, and aware on the ball, especially in transition. Caroline Graham Hansen, Emilie Haavi and Ada Hegerberg all were dangerous in the Norwegian attack, creating multiple opportunities for Norway. It was only because of goalkeeper Alyssa Naeher making a couple of big saves and sheer luck on the side of the U.S. that prevented Norway from equalizing or walking away the victors.

One of the most fun match ups on the day was that of Boston Breakers Emilie Haavi and Kelley O’Hara on the right side of the field, although not so much for U.S. fans. Haavi, who only recently made her NWSL debut for Boston after missing the first several matches due to a fractured jaw sustained early in preseason, repeatedly torched O’Hara with her runs, capitalizing on the space the fullback left behind her when she pushed up into the U.S. attack. That allowed the Norwegian forward to send cross after cross into her teammates, only to be denied by one of the U.S.’s back five each time.

One of the brightest spots for the U.S. today was the on-field chemistry between Crystal Dunn and Rose Lavelle. Dunn started at right winger behind Lavelle, who started in the 10 in Carli Lloyd’s absence from the field. The two of them were fluid in passing with one another and did well to move the ball down the right side, creating opportunities for each other on goal. However, neither were able to capitalize on their on-field chemistry, and a second-half substitution put them on opposite sides of the field from one another.

The most alarming part of the day for the U.S. was the injuries sustained during the match. The USWNT was already without Alex Morgan, Tobin Heath, and Morgan Brian because of injuries sustained prior to camp. Mallory Pugh was slated to start in today’s match but injured her ankle during warm-ups and was replaced by Meghan Klingenberg in the starting XI. Then in the 63rd minute, Abby Dahlkemper made a brilliant sliding tackle to shut down the Norwegian attack near goal. However, the back of her head hit the ground as she was sliding, and she was shaken up on the play. She appeared to be no worse for the wear though, and after exiting the field for a moment, reentered and went on to play the full 90 minutes.

Rose Lavelle was not as lucky as Dahlkemper. In the 85th minute, Lavelle was running at full pace before she grimaced and pulled up, favoring her right leg. Her body language indicated what is likely a right hamstring pull and, after briefly being attended to by trainers on the field, she was subbed out and replaced by Carli Lloyd.

All in all, it was a lackluster performance for the USWNT with a few shining moments of brilliance. The U.S. were outplayed for most of the match but, as is often the case with the U.S., managed to find the back of the net enough times to lift them above Norway.

For now, the USWNT players who play in the NWSL will return to their clubs, where they will resume regular season play until the next FIFA window. During that extended July FIFA window that’s set aside for the Euros, the USWNT will host Australia, Japan and Brazil in the Tournament of Nations, which kicks off on Thursday, July 27 in Seattle.