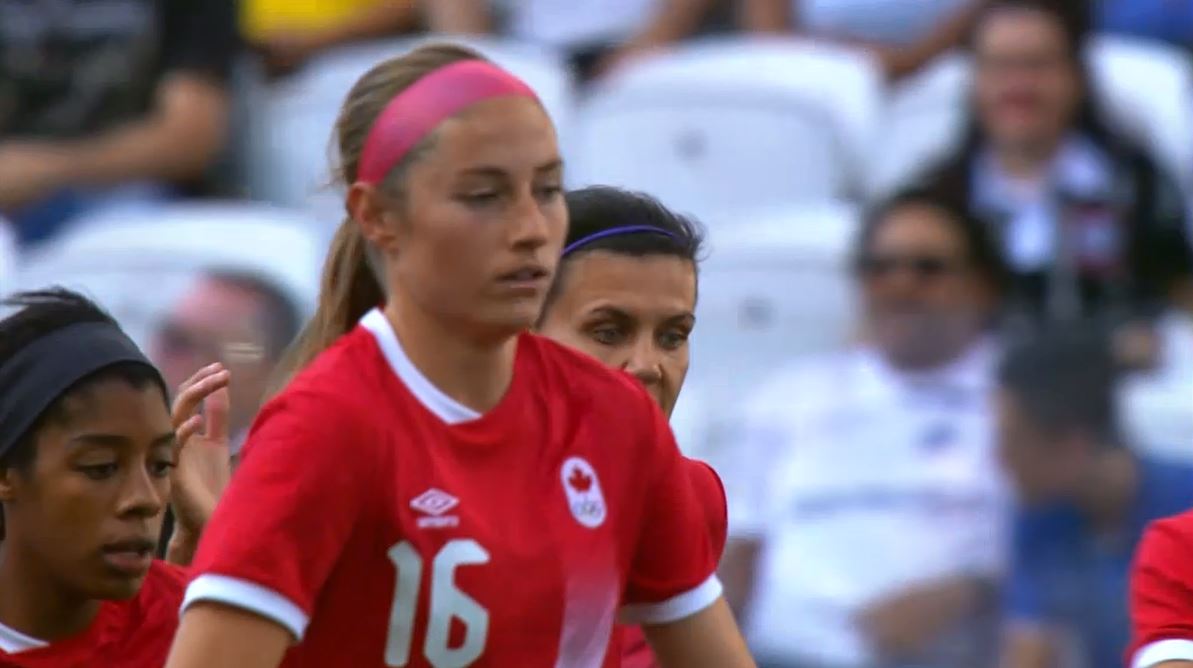 Janine Beckie scored a hat trick against Costa Rica before the 1st half was up.

TORONTO, Ontario – Canada and Costa Rica met in the second of pair of friendlies, with the focus shifting to BMO Field. Canada wasn’t messing about in Toronto, and they showed that they meant business from start to finish. Canada buried Costa Rica with goal after goal, in a convincing 6-0 thrashing in front of 20,628 spectators.

“Yeah, really happy”, said Herdman. “That’s six goals here in Toronto. We got a bit of a glut in the first half. That’s nine goals over two games, just really happy. Clean sheet as well. All the things you look for as a coach in a game. The game was pretty much put to bed by halftime, it’s always a good thing.”

Janine Beckie scored a first half hat-trick, and 16 year-old, Jordyn Huitema added a second half brace off the bench. Jessie Fleming, and Christine Sinclair each had a pair of assists. Deanne Rose opened the scoring, and Steph Labbe, and Kailen Sheridan each played forty-five minutes to earn a shared clean-sheet.

“I’ve been on a bit of a scoring drought for a while,” said Beckie. “Once that first one came it took me a bit more confidence to go for the second. Those finishes don’t happen unless we have incredible quality behind the forward line. Jessie Fleming played a fabulous ball, I don’t finish those unless my teammates set me up. I’m proud of the team, I’m proud of six goals. That’s part of us pushing to number one in the world.”

An early goal was once again in the cards as Canada quickly pounced on some poor Costa Rica defending. In the 2′ minute, Christine Sinclair delivered a pass just shy of the goal-line to Deanne Rose. The 18 year-old forward beat her defender and tapped the ball in behind Noelle Bermudez.

Canada was hungry for goals, and Janine Beckie was just getting going. The Houston Dash striker scored her first of the day in the 5th minute. Rebecca Quinn sent Beckie in 1v1 on Bermudez. She beat the offside trap, split the Costa Rica centre-backs, and chipped the keeper.

Costa Rica was all out of sorts. They had zero defensive posture, and ball watched far too often. Canada wasn’t missing any chances, and they continued scoring in the 12th minute. Jessie Fleming sent a beautiful ball over the top. Bermudez came out of her net to meet Beckie. As she jumped, Beckie slotted the ball underneath her and into the vacated net.

It didn’t take long for Beckie to complete the hat-trick, and it came with some style and flair. Fleming sent a ball into the box, Sinclair in a perfect shooting position setup Beckie, who delivered a smashing volley into the Costa Rica net to the delight of the crowd.

“It’s always nice to score some goals in front of the home crowd,” said Sinclair. “We wanted to work on starting strong from the get go, we did that again, but then again, we had a lull in the second half like we did in the first game, and that was something we wanted to improve upon. It’s something we’ll have to work on in the future.”

Canada’s goal-scoring prowess continued in the second half, but it was from a new face. 16 year-old Huitema came on for Sinclair in the 67th and quickly showed exactly the kind of talent she has at a such young age.

The Chilliwack, B.C. native, went straight to the Costa Rica net and found a loose ball amidst a scramble inside the Costa Rica goal mouth. Huitema added her second goal of the match two minutes later in the 74th minute. Huitema found space ad scored to make 6-0 Canada.

Costa Rica failed to show up. The fight, and strong defensive match that they brought in a 3-1 loss to Canada in Winnipeg on Thursday night, was nowhere to be found in Toronto. Canada capitalized on the chances they created, and Costa Rica was dreadful in all areas of the pitch.

“I think what you saw tonight was a full team performance,” said Sinclair. “Lots of people getting on the goal sheet. We’re a strong team that’s slowly adding depth throughout our entire roster, and I think people saw that these last two games.”

Everything was clicking for Canada. Beckie put the match out of reach, and Huitema made sure to show everyone in attendance what she brings for Canada. The future continues to look bright for Canada, while Costa Rica have yet to reach that next level.