Adriana Leon making most of latest chance with Canada 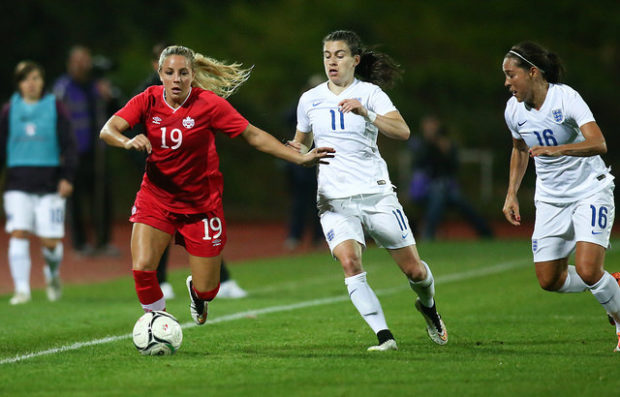 Adriana Leon, 19, is thriving for club and country after a stint in Switzerland. (Photo Courtesy Canada Soccer)

TORONTO, Ontario – Adriana Leon has found a new resurgence with Canada after time away from the national team spotlight. A spell away from the NWSL presented an opportunity to play in Europe with FC Zurich in Switzerland last fall. The 24 year-old Leon was able to score goals in bunches while rediscovering her game.

“I was playing in Western New York for most of the summer, and wasn’t really happy there, and wasn’t seeing my development,” said Leon. “I decided to play for FC Zurich in Switzerland. I was there for three and a half months. I had an opportunity to play in the Champions League. I got some really good game time there, and scored some goals, got some assists, so it was really great.”

There’s a different approach to training, fitness, and the overall philosophy when you compare a footballer’s day-to-day activities in a North American and a European environment. With FC Zurich, Leon was training a lot more than she was use to. There was a bigger focus on technical abilities with the ball and possession-oriented football.

“Europeans are a little bit different in the way they train,” said Leon. “I was training up to two times a day. I’d go in the morning and work on technical stuff, work on foot work, placing the ball. In the evening, I’d have another training with the team, do more of it, work on possession, a bunch of different things, and it was really good.”

Canada Coach John Herdman delivered a bit of a wake up call to Leon when she was left off the roster for the 2016 CONCACAF Olympic qualifiers in Houston, Texas. Leon was not part of a Canadian team that won bronze at the 2016 Olympics in Brazil. Canada shifted to a new approach, with younger players getting a look.

Leon had a lot of time to reflect, and work on her game in the hopes she would be recalled back into the national team environment. It wasn’t an easy process, but she was determined, and willing to put in the work to get back to the international level.

“The past couple of years, I’ve had a lot of time to train,” admitted Leon. “On my own, I’ve been working on different things. I’ve been in the gym a lot, I’ve been going out to the fields on my own, and just working on what I need to work on. There’s also the mental part of the game, where I’ve been working on being able to focus more, and kind of off field things. I’ve had a lot of time to work on that, and when you’ve been away from the environment for so long, you get hungry again, and you want to succeed.”

Herdman has taken note of what Leon has done to change her football story. She came back to North America, and signed with the NWSL’s Boston Breakers for this season. She’s come in and brought a consistent work rate to her NWSL club. Leon was named Player of the Week in Week 3. She is tied for second in the league with 3 assists. She’s scoring, finding her teammates for goals, and that’s had a huge overall impact.

“She’s hungry,” said Herdman of Leon. “That hunger, and desire, it’s infectious with the team. Again, it’s breeding competition. That’s really important for this group. The group of women here that won a medal, some of them have won two, but you’ve got hungry players like Leon who’s letting her professional career tell a story. She’s getting games, consistently scoring, as well as setting goals up. It’s the hunger, and desire to set a competition across the group which pushes people to new levels.”

Raised in King City, Ontario, Leon is expected to have 25 family and friends in attendance at BMO Field in Toronto when Canada hosts Costa Rica on Sunday. It’s a chance for everyone who has supported Leon to watch her as she strives to reach her goals.

Leon came off the bench in Canada’s 3-1 win over Costa Rica in Winnipeg on Thursday, and immediately created problems for the opposition. She was buzzing all over the pitch, and easily could have scored a hat trick. Was there a sense of relief when she scored?

“Yeah probably a sense of relief,” said Leon. “Third time’s the charm, I guess. I had a lot of opportunities, and I think the keeper made a really good save on one of them, and I just fell short on the other one. The third one, I just knew that was going in.”

Adriana Leon has skills for days. She’s recently made a habit of breaking defenders’ ankles with her slick moves. Her ball control, and ability to shake off unwanted challenges gives her an edge. Not everyone has the bag of tricks that Leon does.

She credits her ball ability to daily practice, practice, practice. You often hear of athletes walking around with a (NFL) football under their arm, or someone like Steve Nash who would dribble tennis balls around Santa Clara University. Leon had a different approach, and it wasn’t always something her parents were quite fond of.

“I feel like I’ve had that since I was younger,” said Leon as she described her ball skills. “I’ve always been really good with my feet, and really technical. I like going 1v1 against defenders, so that’s just something I’m good at. I don’t know if this is why, but when I was younger I used to carry a soccer ball around the house with me, wherever I went. It was the weirdest thing, my parents hated it because I was dirtying the floors.”

Canada has always been able to create scoring chances, but finishing those chances isn’t always easy. Leon is back in the fold, and doing her best to show her teammates, coaching staff, and herself that she belongs with the national team competing at the highest level. She’s making a great impression thus far, and showing she can can deliver.