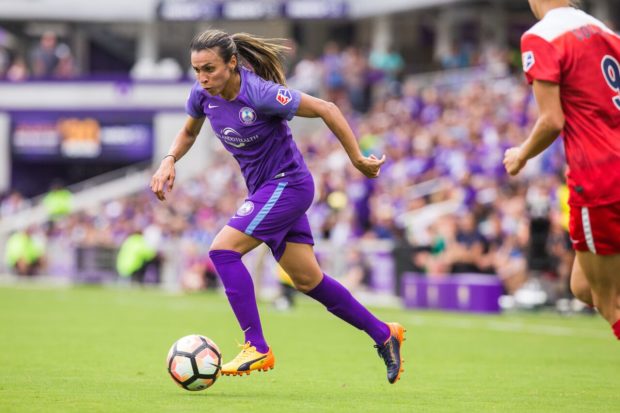 Marta converted a penalty kick to open scoring for the Pride against Boston. (photo by Mark Thor, courtesy of Orlando Pride)

Heading into Week 5, the Orlando Pride were one game away from tying the league record for the longest winless streak, dating back to July 10, 2016. The celebrated moves they’d made during the offseason – signing superstar Marta as well as defenders Ali Krieger and Alanna Kennedy –weren’t having the anticipated results. They were the only winless team, at the bottom of the table.

No one perhaps save the Pride expected to put all that to rest against the undefeated North Carolina, but that’s exactly what they did. However, it’s their most recent performance against Boston that I believe sets them up most for future success. Tom Sermanni rolled out with (initially head-scratching) wholesale changes to an extent that no team has done so far this season, with the exception of Houston’s visit to Seattle, and we know how that went. What amounted to a 4-2-3-1 was designed to capitalize on Boston’s weaknesses, and while the Breakers didn’t put up the strongest resistance, it’s hard to argue with the results.

Sermanni’s biggest shakeup was his defense, where he moved Krieger back to center back in place of Kennedy, who was in midfield, and put Kristen Edmonds at right back. While that move may have surprised Pride fans, Edmonds played in the spot for two years with the Western New York Flash. To say she hasn’t been lighting it up in midfield for the Pride this year is an understatement, last season’s heroics becoming a distant memory. Edmonds held up fairly well on the defensive end, but although she got herself in the box a couple of times, she didn’t offer much in the way of service in the attack. Though it’s uncertain how she’ll fare against players such as Megan Rapinoe or Lynn Williams, Edmonds deserves more time to settle into the spot before the final judgment call.

Kennedy, who did so well in the Flash’s championship run last year, has been less than solid for the Pride, involved in giving up a goal nearly every game, so it’s not too surprising to see her role changed. Krieger started the first two games at center back but appeared less than confident in the role, and both the defense and offense benefited when she moved to her natural position on the flank. However, she put in a solid shift against Boston, particularly in the first half. With Toni Pressley (who must be lauded for any improvements in the Pride defense) acting as more of the anchor, Krieger was almost always the one to restart the attack, alternating between long balls and deep penetrating passes. She was almost solely responsible for shutting down Natasha Dowie, and the two clashed often enough it appeared tempers flared late in the game.

When your friends try to stop you from ordering @PapaJohns for dinner.

Don't be the friend. Use 'OCWIN' for 50% off all online orders. pic.twitter.com/UUudcbvYTQ

What was most impressive about the Pride’s defensive strategy was how well they knew their roles. When Edmonds or Steph Catley or even Krieger on a few occasions pushed high up the field, the others rotated to cover. Kennedy and Monica also dropped back to plug holes when necessary. And finally, the entire team did well to get bodies behind the ball every time the Breakers went on the attack. While the defense still has a ways to go before living up to its reputation on paper – Krieger in particular had a tendency to drift right in the second half – they got their first clean sheet in nearly a year, and without their starting goalkeeper.

Part of the reason for that is the midfield. In order to clog down Boston’s central midfield and deny Rose Lavelle time on the ball – which teams are figuring out is the key to defeating Boston – Sermanni went with a dual pivot of Kennedy and Monica above the backline. Both have experience at defensive midfielder as well as central defense, and for the most part they broke up attacks with simple efficiency. Removed from being the last line of defense, Kennedy appeared more settled, and was able to get in on set pieces, placing several dangerous headers on goal. They also combined well to relieve pressure on the defense, something neither Monica nor Dani Weatherholt have been able to do much of on their own.

49' @AlannaKennedy nearly heads in another goal for the @ORLPride off of a corner kick from Marta. #ORLvBOS 2-0 pic.twitter.com/UK8sMHxXgJ

Higher up midfield, rookie Rachel Hill received the starting nod for her very first minutes in a Pride jersey, forming a three-pronged attack with Marta and Camila. While Marta is Marta and is likely to be involved in any chance on goal for the Pride, Camila has been a real revelation, flourishing in midfield and demonstrating both a tenacity and creativity that the Pride lacked last year. It was no surprise that last year’s midfield was a problem area, and the same can be said for this year’s midfield up to this point. Their performance against the Breakers was the best all season and should improve if Hill can grow into her role, providing a counterpart to Camila’s work on the left. Marta works well as the 10, equally creating for others and going for goal herself.

Jasmyne Spencer was the lone forward in this setup, and although she’s been criticized for her lack of finishing, there was nothing wrong with her goal Saturday night even if it was handed to her on a silver platter by Camila. Placing her as the central forward above Marta allowed Spencer to use her speed to run at and behind a weakened Boston defense. Unfortunately for the striker, she’s also the most likely to get benched for Alex Morgan when she returns from injury, but few teams in the world can argue against a healthy Morgan on the pitch, particularly if she regains the form she showed in France. Last year Morgan was either the creator or finisher, but she couldn’t do both. Thankfully for her, she now has players like Marta and Camila to share the burden.

13' @Jas_it_Up with a left-footed shot from the right side of the six-yard box, puts the @ORLPride up 2-0. #ORLvBOS pic.twitter.com/s32jcfW0Wz

One can argue that the Pride had a little bit of luck in the game – Boston missing their two best defenders, Matt Beard not starting Adriana Leon despite her leading the team in assists, a reckless move by Abby Smith that led to the opening goal on a PK – but one can also probably argue they were due a bit of luck. It’s true that this lineup might not work against teams like Seattle with a strong flank attack, and completely true that the Pride still have a long way to go when it comes to closing out a game.

8' Marta converts the penalty with a left-footed shot for her 3rd goal of the season and @ORLPride's 1st goal tonight. #ORLvBOS pic.twitter.com/7LiTHJzYv8

That said, what I liked best about the Pride in this game was an understanding of their roles, a flexibility in the attack, a willingness to defend in numbers, and most of all, the tactical choice by Sermanni. Beard was simply outcoached. While every coach studies their opponents and makes adjustments for it, most prefer to dictate the game on their terms. For example, Houston will nearly always come out in a 4-3-3, Portland likes to control the midfield, and Washington is always looking for that transition play. With Sermanni, however, I expect both to see this formation again and to see something completely different, depending on the opponent. We’ve seen more defensive experimentation this season than in years past, but at a time when most teams are settling in to their XI’s, Orlando has decided to shake things up. Sure, they kind of had to, but hey, it worked.