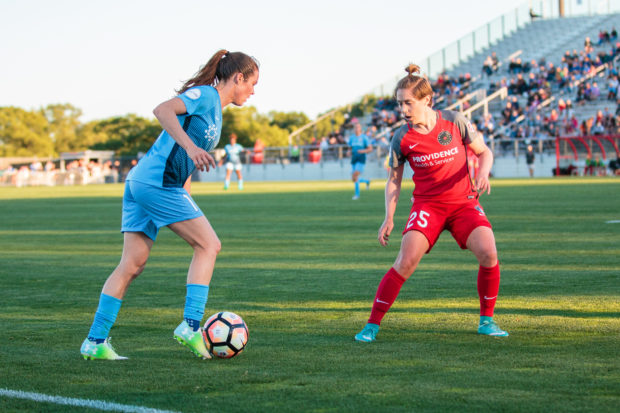 Meghan Klingenberg, red, defends Kelley O’Hara during one of their many battles Saturday night at Yurcak Field (photo copyright Katie Cahalin for The Equalizer)

The Portland Thorns are right on schedule. Despite some early-season struggles and a rash of injuries, the Shield holders are right where they want to be after eight games.

“This one was going to decide what we felt about this period. If we won tonight, we’d be in a great place,” head coach Mark Parsons said after his team shutout Sky Blue FC, 2-0, on Saturday in New Jersey.

In some ways the Thorns are chasing the ghost of last year’s squad that busted out of the gate by playing into July without a loss. But as Parsons points out, this year’s team has scored more goals (11 to 10) and even more points (15 to 14) through 8 games than last year’s.

“We had a slow start last year. It was only that four-game win streak in the midseason,” Parsons added, referencing the streak that, ironically enough, began with the 9th game.

You may be chuckling at the notion that a team that began 7-0-5 in 2016 started slowly, and in the greater context it is indeed laughable. But a look back brings to mind a 1-1 draw in Kansas City during which the Thorns were being badly outplayed until a questionable red card against Shea Groom left the Blues to play a woman down for more than a half. There was also a bit of luck in escaping the SoccerPlex with a 0-0 draw against the Spirit and Toyota Park on even terms with the Red Stars.

This season the Thorns struggled early with buildup play, but Parsons never envisioned a finely-tuned product in April. He never has.

“There’s teams (that) over train in preseason, and they probably do too much. We’re not that team. We take care of our players and athletes and we build them in.  The teams that came out of the gates flying, now they’re starting to pick up injuries, now they’ve started dipping in results. We’re the opposite.

“Every year that I’ve coached this league, because we’re cautious in the preseason and we’re building up tactically and we don’t over train, those first three or four are tough. Now we’re finding our feet, we’re getting better each week.” 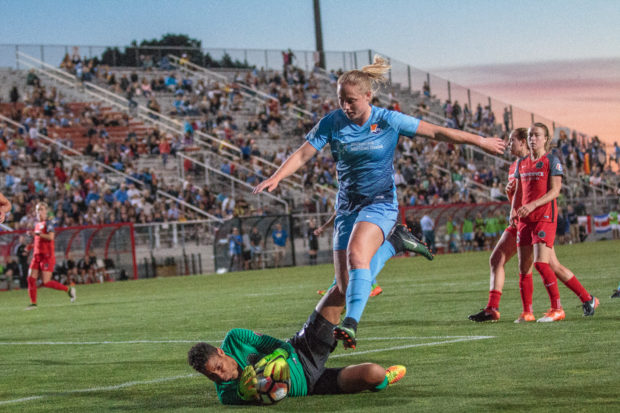 Asked about the early struggles building out the back, left back Meghan Klingenberg said one of the best parts about the Thorns is their commitment to what they do.

Much of the scorn for the slow play fell at the feet, literally and figuratively, of goalkeeper Adrianna Franch. Parsons though, unprompted, extolled the virtues of Franch as the best keeper in NWSL this season.

“While it’s a better team performance,” he said of Saturday’s win, “AD, what she showed tonight, and I know we’ll talk about it because of the penalty save and some of the other saves, she’s been doing that the last three weeks. I’ve told (goalkeeper coach) Nadine Angerer there’s not a goalkeeper we’d rather have in the league. Unfortunately, it takes a penalty save or it takes a game like that for people to talk about it. We’ve been talking about it. No one is performing like AD right now.”

The Thorns are also getting healthy. Dagny Brynjarsdottir made her season debut against Sky Blue, and Tobin Heath traveled to New Jersey though she did not dress for the match. Parsons said Heath will participate in a scrimmage during the off week and should be ready for some sort of contribution in the rematch against Sky Blue on June 17 at Providence Park.

Getting veteran players back—Katherine Reynolds has also been out—will further play into the narrative that the 2017 Thorns are better than the 2016 Shield team.

“Coming back with a core group, we were able to start at a higher level than we were in the past, and we’ve put together some really, really good performances,” Klingenberg said. “We definitely put together strings of performances that we weren’t doing last season at this time. That makes me really excited to see where we can be by the end.”

The current NWSL table has five teams crowding the top of the table with only four playoff spots available. The Thorns are third of those five. And that’s a position that suits Parsons just fine.

“What’s nice this year is Chicago and North Carolina are proving right out of the gate that they’ve probably been the strongest. It’s nice that we’re able to focus on us and not be talked about as that and just trying to get better each week.”

-My Player of the Week ballot: 1) Casey Short – for me the best player on the field in one of the best team performances of the season. Short was always in the right place to not only suck the life out of anything the Reign did on the right side but also distributed well including the ball that put Sofia Huerta in on a breakaway; 2) Nadia Nadim – helped set up both goals and was a two-way force throughout the evening against Sky Blue; 3) McCall Zerboni – defensive presence helped Courage stay on the front foot most of the day against Kansas City, and her flick finish in front of goal wasn’t too shabby either.

-My first thought about the Dash is that a more refined team could be on a two-match winning streak right now as they absolutely were good enough between the 18s to beat both the Reign and Spirit. That they didn’t, and lost both games 2-0, is as indicative as to what ails them as anything else.

-Win, lose, or draw, it was surprising to see the Dash come out of the blocks with so little energy.

-Marta quickly took matters into her own hands on Saturday for the Pride, creating and converting the first penalty in club history to set the tone for much-needed, 2-0 victory over the Breakers.

-Finishing aside, the Red Stars win over the Reign on Sunday might be the single best team performance of the year. By the second half the Reign had no answers for how to break down a well-organized defense and were also vulnerable to the Red Stars counter.

-Taylor Comeau was terrific in place of Arin Gilliland, who was officially out with an injury but who may have a tough time getting back into the XI.

-It sort of feels like the Spirit rebuild is going to work, which is not to say whether or not it was the right time to do it.

The attendance tables will return after the FIFA break — promise!

-Abby Dahlkemper continues to expand her league record for consecutive minutes played. Saturday was her 47th straight 90-minute shift, pushing the mark to 4,230. If she starts the first Courage game after the break, it will be her 50th straight start since being drafted.

-Erica Skroski sat out Sky Blue’s Saturday loss to the Thorns, snapping her streak at 28 games started. She had been the only player from the 2016 draft to start every match.

-Makenzy Doniak, the only other player from the ’16 draft to appear in every game, extended that mark to 29 when she started for the Courage on Saturday.