ALSO IN TODAY’S ROUNDUP, USWNT GEARS UP FOR SCANDINAVIAN TOUR, HINKLE WITHDRAWS FROM TRIP, LLOYD NAMES SKY SPORTS SPORTSWOMAN OF THE MONTH, AND SEVILLA FC MOVES UP TO PRIMERA DIVISION 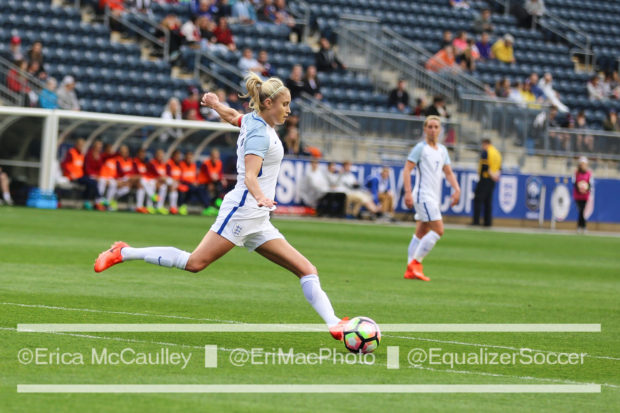 After a successful year at Manchester City, Steph Houghton has signed a new deal with the club (photo copyright EriMac Photo for The Equalizer)

Lioness captain Steph Houghton has signed a new deal with Manchester City as was announced today by the club. The 29-year old center back will remain at City where she has been since 2014, though the length of her new contract has not been disclosed.

Couldn’t be happier!
Special thank you to everyone at the club who makes it feel like home, my family and our fans!
Here’s to the future! ? pic.twitter.com/AKf2mLO7do

Houghton will be instrumental in leading City in their title defense campaign (they fell short to Chelsea on goal difference in the Spring series) later this year as they look to vie for a consecutive title as champions of the Continental Cup and the FA Women’s Cup. City also reached the semifinals of the UEFA Women’s Champions League before falling to Lyon, eventual champions, in a two-leg series this past season.

Houghton is excited by her new deal with the club as she’s found a home there. “This will be my fourth season and I’ve loved every single minute of it. I had no intention of going anywhere else and this is my home now,” she said. “There is a passion at this club for both the men’s and women’s teams and we’re all together and it feels one family.”

Houghton will represent her country this summer at the EURO championships before the WSL 1 resumes later this year.

The U.S. Women’s National Team is set to take the field on Thursday for it’s first game in two months as they take on Sweden followed by another international friendly against Norway on Sunday. The team made their way to Gothenburg, Sweden over the weekend and will train ahead of Thursday’s match.

Today, it was reported that North Carolina Courage defender Jaelene Hinkle withdrew from the Europe trip due to personal reasons. The current roster sits at 19 players as the team prepares to take on Pia Sundhage’s Sweden in two days.

Sky Sports named Carli Lloyd their Sportswoman of the Month for May after she took home the majority of the votes in the category. The two-time FIFA World Player of the Year most recently led Manchester City in their FA Cup final win over Birmingham. She also added two goals for City during the UEFA Women’s Champions League competition that saw City make it to the semifinals before falling to eventual champions, Lyon.

Now that her loan to Manchester City has concluded, the 34-year old will play with the USWNT later this week in two international friendlies against Sweden and Norway before returning to the Houston Dash of the NWSL. The Dash expect her to be available for their next match, June 17.

Congratulations @CarliLloyd – voted your Sportswoman of the Month for May ⚽️ @SkySportsNewsHQ pic.twitter.com/K3TxRiqjxB