Lindsey Horan puts in a performance for the books as she scored both goals in Portland’s 2-0 win before heading to Europe with the USWNT (Photo: Craig Mitchelldyer-Portland Thorns FC)

What Happened: In the 20th minute, Portland Thorns and USWNT midfielder Lindsey Horan scored her first of two goals of 2017 on Saturday as the Thorns beat Sky Blue FC by a score of 2-0 to lock in third place in the NWSL standings after eight games.

How It Happened: This set piece play and finish was pure class. Nadia Nadim steps up to take the free kick from almost 50 yards out for Portland after a yellow card was issued to Sky Blue. She floats it far post, and initially it looks like it might be too far for any of the Thorns players to make anything out of. Then, it appears almost out of nowhere, comes Lindsey Horan with a diving header. In re-watching the goal, you can see that Horan strategically positions herself with that far post run. She’s on the move once the ball is kicked and ends up timing it perfectly so that she’s on the end of Nadim’s ball right when she needs to be. The best part about this goal to me is that Horan completely lays out her body to make contact and because of that, she’s able to put a ton of force behind the ball, ensuring that there’s no way Sky Blue goalkeeper Kailen Sheridan can make the stop. This was individual brilliance on Horan’s part to time her run, put in the effort to make contact on the ball with her head, and utilize spectacular form to keep that ball on target.

20′ @Lindseyhoran11 with the header and the goal for the @ThornsFC. #NJvPOR 0-1 pic.twitter.com/9W28njOuCP 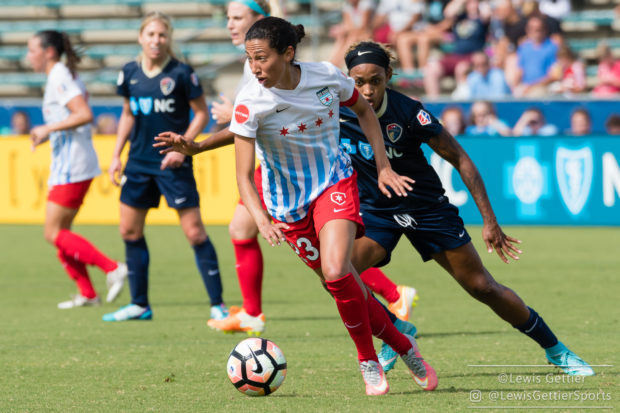 Christen Press scored the only goal of the game to lead the Red Stars over the Reign. (photo copyright to by Lewis Gettier)

What Happened: Chicago Red Stars and USWNT forward Christen Press scored her third goal of the season in the 49th minute to give Chicago a 1-0 victory over the Seattle Reign.

How It Happened: Once the season kicked off and a few uninspiring performances led the way, it became imperative for Chicago to figure out how to put all of the pieces together in the attacking third. Let me tell you, they’ve done just that. But, how? The Sofia Huerta-Christen Press combination. To date, Press and Huerta have assisted all of each other’s goals in the run of play. And we saw that again this past weekend against Seattle. After a turnover by Seattle where goalkeeper Haley Kopmeyer plays a ball into Chicago’s feet near half field, we see Huerta on the move on the left side of the pitch. The ball is played over the top and Huerta is able to get in behind her defender out on the left side of the box. She times her run perfectly so that she’s able to catch up to the ball after a few bounces, control it, and take on her defender now approaching end line. Her first touch gives her the extra space to beat her defender, and she’s then able to get the cross off with a driven ball on the ground angled to the PK spot. It’s super important that Huerta has the vision to see where Press is and thus play the ball back a bit, instead of directly across the front of goal that would’ve been easily dealt with by either Kopmeyer or the two Seattle defenders holding their line. By playing the ball angled back to the PK spot, Press is able to beat her defender off the run and meet the ball first. With one touch and superior finishing technique, Press uses a first-time finish far post that lands right in the far post netting that Kopmeyer is unable to even get a hand on.

Every week throughout the NWSL season, the Kronick Report will break down some of the important goals from the week in a tactical and technical analysis of the art of goal-scoring.