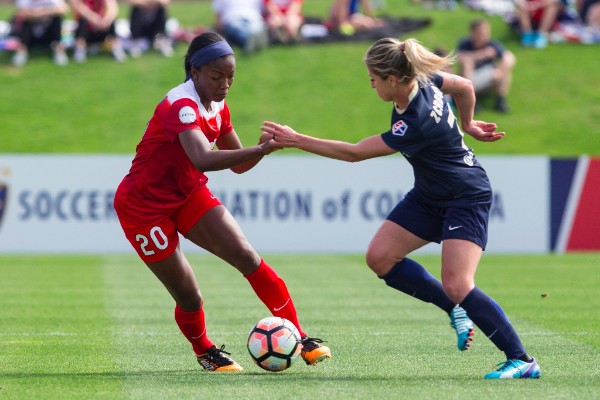 An early goal from Cheyna Williams and Mallory Pugh’s first professional goal led the Spirit to a 2-0 victory over the Houston Dash.

Both sides came out with numerous changes to the starting XI. Dash interim head coach Omar Morales moved midfielder Amber Brooks back to central defense and returned Irish international Denise O’Sullivan to the midfield, while Washington returned to the four-back formation and started Arielle Ship up top.

Washington wasted no time getting on the board when Williams was played through by Havana Solaun in the third minute and beat the Dash defense, slotting it far post past goalkeeper Lydia Williams.

3' – #WAS Goal – @Cheynalee_ opens the scoring with a beautiful run and smooth finish into the far corner. #WASvHOU
1 – 0 pic.twitter.com/kRX4XIf5wg

The Spirit kept their foot on the gas for the rest of the half, barely letting Houston see the ball and forcing turnovers when they did. In the 27th minute, they looked to double their lead when, breaking on the counter again, Pugh flicked a straight pass to a wide open Kristie Mewis. The midfielder’s heavy first touch gave Williams time to come off her line and block the opportunity.

The Dash didn’t have their first real chance until the 35th minute, when Rachel Daly, playing out of the right back position, launched a long ball over the top that was headed down directly in front of goal. Forward Janine Beckie launched a rocket from the top of the box, but her Canadian teammate Stephanie Labbé was equal to the task.

Houston came out stronger in the second half, playing more patiently and building up attacks, but they lacked in the final third. The Spirit continued to play strong on transition and drew a dangerous free kick in the 57th minute. Mewis sent a low ball through the wall, but Williams was able to pick it up through traffic and do just enough to push it out of danger.

Pugh put the nail in the coffin of the Dash in the 70th minute when Daly left her wide open on the left side of the box. Fed by Mewis, she sent the ball through the legs of Williams to double the Spirit’s lead.

The Dash pushed hard for a late goal, but although they had a few chances, the Spirit defense stepped up and denied any truly dangerous looks on goal. With this loss, their fifth straight, the Dash displace the Spirit at the bottom of the table.

{Related: Trouble Down the Table}