Tasha Kai, with new ankles, back with Sky Blue 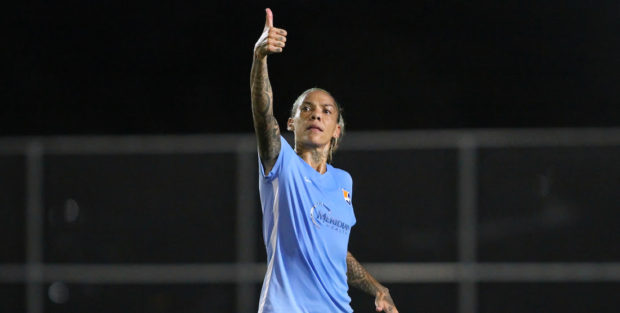 After surgery on both ankles, Tasha Kai is back in New Jersey and trying to get in soccer shape. (Robyn McNeil, ISI Photos)

Tasha Kai remains on the 45-day disabled list and will not be on Sky Blue FC’s game roster again on Saturday against the Thorns. But the eccentric Hawaiian returned to New Jersey last weekend and was at Yurcak Field to support her team after flying through the night from Oahu to Newark.

“It’s a good day to be in New Jersey,” Kai, 34, said after watching Sky Blue defeat the Orlando Pride to remain perfect at home this season.

After surgery on both ankles, Tasha Kai is back in New Jersey and trying to get in soccer shape. (Robyn McNeil, ISI Photos)[/caption]Kai is a Sky Blue original. No, not in NWSL terms. Kai was one of three players allocated to Sky Blue when they were founded for the launch of WPS in 2008. A year later the club won that league’s first championship and the “Kai Krazies” at Yurcak shouted with her every move.

Stint number two in New Jersey has been on different terms. Following the demise of WPS in early 2012, Kai took several years off from soccer before making a surprise return to the club in 2016. Her return netted 4 goals and 1 assist across more than 1,400 minutes. It also included ankle injuries—injuries as in one to each ankle. That led to offseason surgeries—again, one on each ankle.

“I feel good,” Kai said. “My ankles are brand new. They’re hanging in there. We did everything possible to get back to where we need to be.”

Kai said the injury to her left ankle was mostly about wear and tear. She said she hurt the right one “pretty badly,” last May. A look back at Kai’s May shows that she came off at halftime—with Sky Blue trailing 4-0—on May 21 in Western New York. A week later in Chicago she subbed on during the second half and had to be subbed back out in the closing minutes. Then came the FIFA window part of which Kai spent in a walking boot. Then came two more relief appearances. After that Kai started every game the rest of the season.

Asked if she played when she probably should not have, Kai replied: “Oh absolutely! But you sacrifice…and that’s what you do.”

Now that she is back with the club the next step is to get back into soccer shape and prepare to try and make an impact on a club that is hanging inside the top four despite playing a wildly inexperienced backline and goalkeeper outside of Christie Pearce.

“You never lose the love of the game and the passion of the game,” Kai said about returning after so many years on the sideline. On her extended time away she added, “There’s things in my life that happened, and I needed time to step away from the game personally, mentally, physically, emotionally.”

Kai plays on the edge every second on the field, and her body has often paid the price. She also had a less than amicable split from the U.S. national team. But the biggest reason for stepping away from soccer was to spend time with her father, who was ill and passed away in late 2014. Although she missed some of her prime years, Kai cherishes being able to be by her dad through his final days.

“I have to thank Christie Pearce and (Sky Blue coach) Christy Holly for bringing me back here and giving me that second look.”

Kai said she is “in a good place,” and now that she is back—with new ankles—does not have any set end date on her mind as to when her career will end. She just knows that the next time will be the last time.

“You just play until your body tells you no. I got a new body, so I got a couple more years hopefully, knock on wood. But I don’t plan on ending anytime soon.”