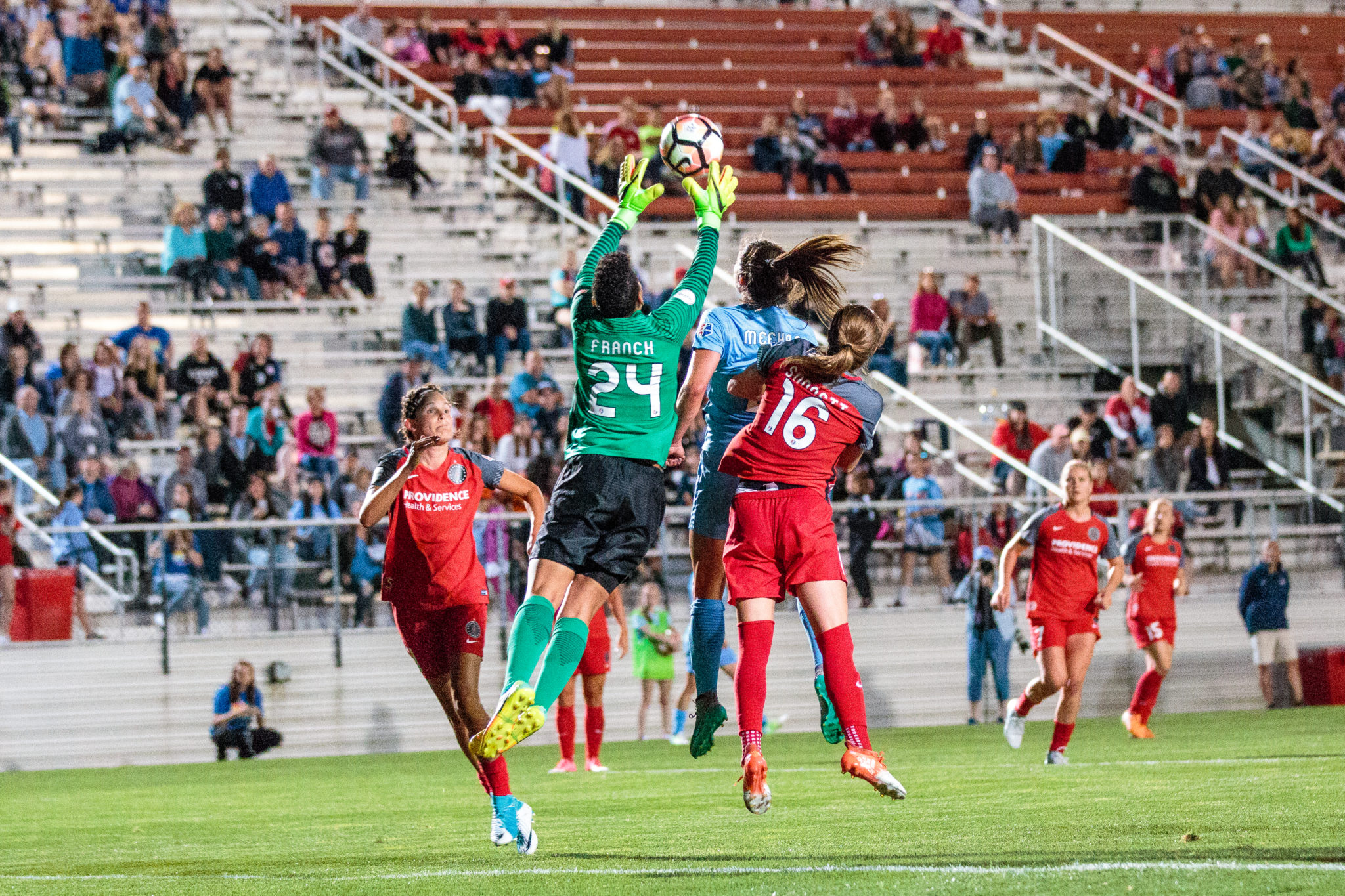 Lindsey Horan buried two first half goals and Adrianna Franch saved a penalty to help keep a clean sheet for the fifth time this season as the Thorns became the first visiting team to take points at Yurcak Field this season with a 2-0 victory over Sky Blue FC. The win puts the Thorns into second place on the table pending Sunday’s Red Stars-Reign match.

Sky Blue was forced to put Kelley O’Hara on the back line due to injuries to Erica Skroski and Erin Simon. For Skroski it marked the first time not starting after being in the XI for the first 28 games of her professional career. She remains on course to join the U-23 national team. On the Portland side, Dagny Brynjarsdottir came off the bench for her first action of the season. She will join Iceland for international duty next week.

Horan’s opening goal came after Kayla Mills was yellow carded for a foul in the Thorns half as the visitors attempted to break out on a counterattack. Former Sky Blue stalwart Nadia Nadim, who was on the receiving end of the foul, stepped into the lengthy free kick and placed it perfect to the far post near the top of the six-yard box. Raquel Rodriguez mistimed her jump which allowed Horan easy access to get her head on it and blast it home from about eight yards out.

Sky Blue had a golden opportunity to equalize at 35 minutes when a Thorns giveaway led to Sam Kerr getting a good look at the Thorns goal. Kerr’s shot beat Franch but missed the goal wide, keeping Sky Blue chasing in the game.

Horan doubled the Thorns’ lead in the 42nd minute. The play became dangerous when Celeste Boureille beat Mills with a cut inside the penalty area. Sky Blue cleared away the initial danger but could not grab hold of possession. Nadim then spotted Meghan Klingenberg making a run on the week side and played her a perfect ball. Klingenberg crossed to Horan who stuck a foot out and knocked it in as Sky Blue keeper Kailen Sheridan raced out in an effort to break it up.

The hosts had the better of the possession after halftime and had a golden opportunity to climb back into it when Mallory Weber fouled Rodriguez from behind in the box. Sarah Killion lined up for the penalty but Franch guessed right and, diving to her left, got her glove on it to knock it away and keep Sky Blue off the board. The penalty miss for Killion, in the 56th minute, was her first of the season after four straight conversions. She had converted seven in a row from the spot.

Franch did more than just save Killion’s penalty. She dominated her box and made one save of particular quality when McKenzie Meehan headed one on frame from close range.

The win was the Thorns’s (4-1-3, 15 pts) sixth straight match without a defeat. Sky Bue (4-4-1, 13 pts) lost at home after opening the season with three consecutive wins at Yurcak for the first time. Following a dark week for the FIFA windows, the sides will meet again June 17 in Portland.