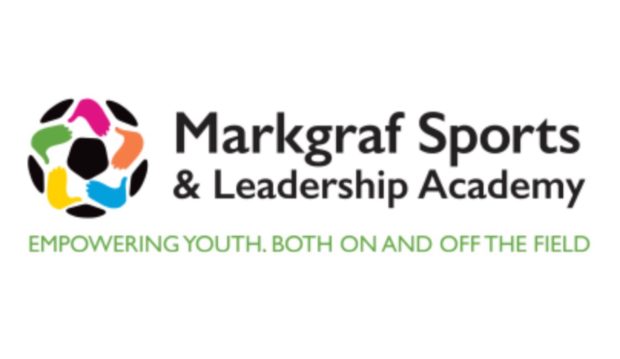 Week 7 was definitely not without its share of controversy and drama. The biggest headline on the weekend was the dangerous heat situation in Houston, resulting in Dash striker Rachel Daly collapsing from heat exhaustion. But that wasn’t the only drama in the league. Allysha Chapman was shown a red card after going studs up on Hayley Raso, and the commentators for the FC Kansas City-Washington Spirit match were less than stellar.

Some of that is relatively minor, especially compared to others, and some of it was quite humorous. I think we’ll be hearing about Becky “Sabrebunn” and her glorious header goal for quite some time. Others, well, there’s a silver lining if you look close enough. And then there’s stories that have nothing to do with last weekend’s matches but that help prove why soccer is still the beautiful game. With that being said, here are my Friday Favorites.

If you were to sign up to participate in a former United States women’s national team soccer camp, what would you expect? Drills, fun soccer-related games that test skills, and maybe a scrimmage or two, right?

With the average soccer camp, you’d be right, but Kate Markgraf has never been average, so it should come as no surprise that her soccer camp wouldn’t be either.

“I have a young daughter and I was thinking, ‘You know, I think I have a lot of interests and I know that my kids have a lot of interests that they wouldn’t want to do just one thing with soccer at this young of an age,’ so through my Master’s in kinesiology and my Master’s in counseling, and then just through raising kids, I thought it would be really interesting to put these kiddos in different experiences and have them walk on a balance beam a little bit. And if they fall, to have that safety net so we can teach them the coping strategies of how to overcome challenges,” Markgraf said.

From that came her own sports and leadership academy, which she founded last fall. The academy’s camp, the first of which runs from June 19-23 in Milwaukee, combines soccer with yoga, drama and music to help get girls out of their comfort zones. Markgraf said that by doing so, she hoped the girls would be empowered, paving the way for future success on and off the soccer field.

“Now in today’s society, we just need more opportunities for kids to be exposed to that, so hence the yoga and the mindfulness and the drama and the drumming. It’s a little bit about, how can you be uncomfortable in different setting because, especially with females, you want to make sure they have confidence and, more than anything, self-awareness. If you build self-awareness, you have the building blocks for confidence, grit and resiliency….Basically I looked at everything that can kind of create self-awareness and put it all into one camp. “

The academy also teaches girls about giving back through community service. On the final day of the five-day camp, the academy will host a unified event in connection with the Wisconsin Special Olympics in which children with special needs, whether Special Olympians or not, can participate in some soccer-related activities and small-sided scrimmages with the campers.

“I think it’s really important to create empowered allies across all different spectrums. We have a couple of scholarship kids from inner-city Milwaukee that Adidas and a nice family donated some scholarship spots for, so we’ll have across the SES (socioeconomic status) and race spectrums, and I wanted to do it across ability spectrum because pretty soon, if you put people in the same room, they’ll stop looking at their differences and they’ll connect on their similarities, and I wanted to create that opportunity for kids.

“I just wanted to create a positive participation and positive experience at a young age because I think it will pay dividends down the road.”

Nothing but class from Reign, Dash 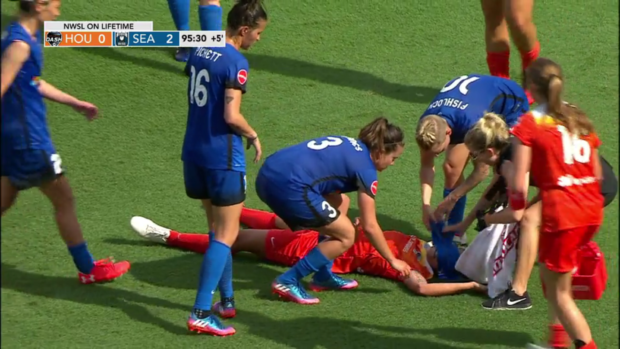 Rachel Daly is surrounded by Reign players after collapsing from heat exhaustion.

As previously mentioned, Rachel Daly collapsing from heat exhaustion in the final minutes of Saturday’s Lifetime Game of the Week was by far the biggest headline to come out of women’s soccer last weekend. It’s been covered extensively, both by The Equalizer and news outlets worldwide. The league, Lifetime, and A+E Networks have been blasted here and back by concerned and angry fans questioning the decision to force games into afternoon time slots that often came with dangerous conditions for players and fans.

But that’s not what I want to focus on. Instead, I want to focus on the quick thinking, sportsmanship, and pure class that was displayed by every single player on that pitch that day. For over 90 minutes in a heat index of 102 degrees, 22 players put friendships aside as they competed against one another.

But all of that changed the second Daly hit the pitch. She was immediately swarmed by blue jerseys, as Lauren Barnes and Jess Fishlock began checking on her while waiting on the trainer to run to where she lay on the field. The two of them, along with a couple of Daly’s Dash teammates, began helping the trainer attempt to cool her off while waiting on paramedics to further treat her. In another possibly overlooked display of sportsmanship in that moment Janine Beckie handed Barnes a water bottle so she could hydrate some, as she had just finished playing over 90 minutes as well.

Daly falling out because of heat exhaustion was scary for everyone watching, whether at home or at BBVA Compass Stadium. But the way the Reign and Dash players came together to help take care of Daly was a remarkable sight to see. It may sound corny, but it reminded me of the Mr. Rogers quote: “When I was a boy and I would see scary things in the news, my mother would say to me, ‘Look for the helpers. You will always find people who are helping.’”

That class and sportsmanship only continued off the field, as players returned to the locker room and took to social media to voice their concerns about the game. Fishlock not only tweeted about the unsafe playing conditions, but took the time to send her regards to Daly and her family as well.

Please send our thoughts to Rach from all of us at Seattle Reign. It was insanely hot. We hope she recovers soon.

Several other players and both teams tweeted out their support and well wishes to Daly, who, as most fans know, was treated at the hospital and released a couple hours later. Once she had recovered, Daly tweeted out a message to her fans, teammates, and the Reign. In yet another display of sportsmanship surrounding that game, Daly sent her regards to the Reign’s Beverly Yanez, who had to be stretchered off with a laceration to her leg early in the match.

Thank you to everyone pic.twitter.com/nWDbt4qRIP

As Daly’s message says, they were class acts, all of them. And that class and sportsmanship on and off the field is one of the things I love most about soccer. While some say it’s just a game, to me, it’s so much more than that.

One of my favorite things about the NWSL is some of the players’ willingness to share their lives with fans via social media, especially when they “let their hair down” and let fans see a side of them not normally seen off the pitch. As someone who tries not to take herself too seriously, I appreciate when players do the same and share that with the world.

On Monday, May 29, McDonald posted a picture of her reading with her son on Twitter. The picture’s caption ended with the hashtag #ChillinOutMaxinRelaxinAllCool, a line from the Fresh Prince of Bel-Air theme song.

That prompted a fan who had noticed McDonald’s hashtag to reply with a following line from the song. From there, McDonald proved she’s got more skills than just scoring goals, as she embarked upon a back-and-forth exchange with the fan, during which they “rapped” the entire theme song via Twitter.

Rapping Fresh Prince of Bel-Air theme song on twitter with a fan was quite priceless! #TheLittleThings #MyFavShowOfAllTime @uswnttobs17

For McDonald’s Twitter followers that were online at the time (as I was), it was a magical, hilarious experience to watch the whole exchange go down. For those that missed it, don’t fret. McDonald tweeted that she’d be down for future Twitter rap-alongs.