Run of Play: Expect the Unexpected 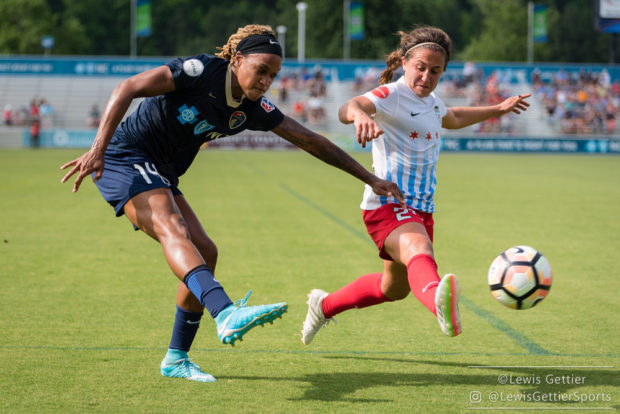 We often hear that anything can happen in the NWSL. Any given team, on any given day, can defeat any other team. If there’s one constant in the league, it’s to expect the unexpected, and this past week of play proved that more than once.

When I think of goal-scoring defenders, I think of Wendie Renard, Julie Ertz, Lucy Bronze, Joy Fawcett. I do not think of Becky Sauerbrunn, who despite her many, many quality attributes, is not known for her scoring prowess. Prior to this season, she had two goals in four seasons with FC Kansas City (and one with the Washington Freedom back in the WPS) and none in over 100 international appearances. However, last Saturday against Washington, she added one to her tally in fine fashion.

In the 60th minute, Kansas City up by one thanks to Sydney Leroux’s brace, Sauerbunn made a run from the far corner of the box to launch herself over Katie Stengel and decisively head in a corner kick past Stephanie Labbé. As Washington was able to pull one back late in the game, Sauerbrunn ended up scoring the game winner. Fun fact – known for her intelligence on and off the pitch, she uses her head in more ways than one. All but one of her goals in a professional league have been headers.

Size has never really mattered when it comes to Danielle Colaprico, who is in her third year of being one of the best defensive midfielders in the league (even if she’s not playing in that spot as often these days). A gritty ball-winner, Colaprico has never struggled to take on (and take down) opposing players. Last weekend she helped the Red Stars secure their back to back wins over North Carolina by standing far taller than her 5’3” height.

In the 74th minute, after opening scoring in the first half, Colaprico guarded near post on a Courage corner kick. Lynn Williams rose above all her defenders and neatly headed in a ball that had Alyssa Naeher beat. Thankfully for the Red Stars, Colaprico was there for a brilliant goal line clearance.

Colaprico’s clearance may not be remembered in the history books like Meghan Klingenberg’s similar heroics in the 2015 Women’s World Cup, but it was just as impressive.

In the first week of the season, I wrote about how impressive NWSL goalkeeping is, and it hasn’t let me down since. One of the most notable keepers is also the youngest, 21-year-old Kailen Sheridan. It’s rare that the goalkeeper of the losing side is the story after a game, but no one could deny the Sky Blue netminder’s prowess against North Carolina, in which she set a Sky Blue record with 11 saves despite giving up two goals.

What I’m most impressed with at times is how composed Sheridan is. Yes, she usually has Christie Pearce in front of her, but the rest of her defense is as young and inexperienced as she is. Regardless, Sheridan owns her box, accepting responsibility for goals when she needs to and letting her defense know they can do better when they need to. And as strong as she is in net, she has the confidence to come off her line as well.

Sheridan currently sits behind Labbé and Sabrina D’Angelo, both of whom are also having fine seasons, in the Canadian goalkeeper pecking order. However, John Herdman has already seen fit to give her games, and she’s ready for more.