Also in today’s roundup, Hope Solo signs with Eurosport, Tobin Heath will travel to NJ, Canada announces its roster for Costa Rican friendlies, U-23 roster for Sweden tournament announced and the U-17s are going back to Cali.

After suffering a hamstring injury that sidelined her for the French Cup Final, Alex Morgan looks to have recovered just in time for the Champions League Final. Olympique Lyonnais coach Gérard Prêcheur said that Morgan would be available for tomorrow’s clash against Paris Saint-Germain, although he did not confirm whether she’d be in the starting lineup.

Gérard Prêcheur, @OL coach: "@alexmorgan13 is back & she is available tomorrow – you will see then if she will start!" #UWCLfinal

Morgan suffered the injury in Olympique Lyonnais’s May 13 regular season match against PSG. In just the 40th minute, Morgan was defending against the run when she suddenly stopped, favoring her left leg, and took a seat on the pitch. She left the pitch a few moments later, and it was announced on Tuesday, May 16 that she had injured her left hamstring and was ruled out of the French Cup Final, also against PSG.

Both the club and Morgan have been optimistic about her recovery, and it seems like that has been with good reason. That’s likely welcome news for Orlando Pride fans, as Morgan is set to rejoin the Pride following her stint with Lyon and a call-in to the United States national team.

Morgan, BBC Women’s Footballer of the Year Ada Hegerberg, and Olympique Lyonnais take on PSG tomorrow, June 1, as it attempts to repeat as treble winners. The Champions League Final will be streamed live on YouTube, with kickoff scheduled for 2:45 EST. 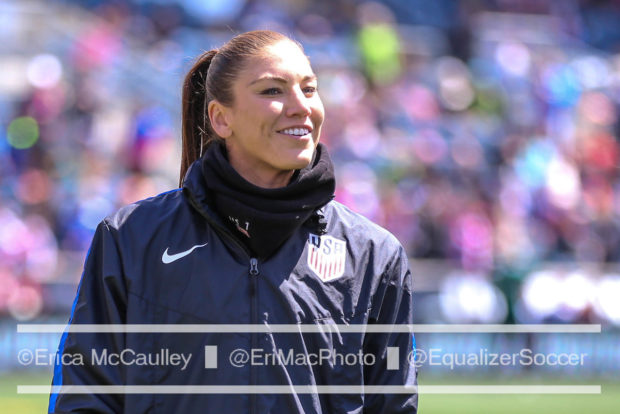 Hope Solo will serve as Commissioner of Women’s Football during Eurosport’s 2017 Euro coverage. (Photo Copyright Erica McCaulley for The Equalizer)

Eurosport announced on Wednesday that it had “signed” former USWNT goalkeeper Hope Solo for its coverage of the 2017 European Championships, which kick off July 16. Solo will serve as the Commissioner of Women’s Football for the network.

The network’s press release lauded Solo for her outspokenness and said that her role as Commissioner of Women’s Football will be to “take on the moments and issues facing the game.”

“I’m delighted to be joining Eurosport ahead of what is a brilliant summer for women’s football in Europe. I’m here to shake things up, I will take no prisoners and I can guarantee fans an honest opinion,” Solo said.

“Having [been] a professional for well over a decade, as well as playing in World Cups and Olympic Games, I think I’m as well placed as anyone in the game to analyse women’s football. I love playing, so it will be a whole new experience watching from the stands giving fans my own thoughts on the game. It should be a great summer.”

Tobin Heath to travel to New Jersey, unlikely to play 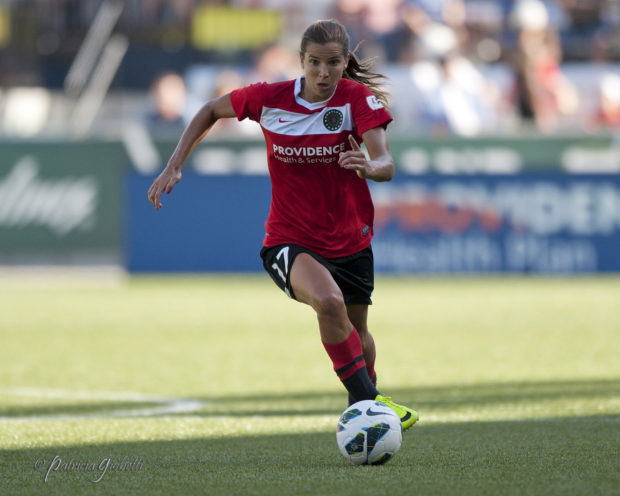 Tobin Heath will reportedly travel with the Thorns to New Jersey but is unlikely to take the field this weekend. (Copyright Patricia Giobetti | http://www.printroom.com/pro/psgiobetti)

Jaime Goldberg of The Oregonian tweeted today that Portland Thorns FC head coach Mark Parsons said that midfielder Tobin Heath will travel with the team to New Jersey but is unlikely to play in their Week 8 match-up against Sky Blue FC. Heath, who has been recovering from a minor back injury, has yet to make an appearance for the Thorns this season.

Parsons said Heath will travel to NJ, but it's unlikely she will play; He also said he expects Dagny to get minutes in Sat's game #BAONPDX

Dagný Brynjarsdóttir, who has also yet to take the field for the Thorns this year because of a lingering back sprain, will also be traveling with the team to Jersey, and Parsons expects her to see her first minutes of 2017 against Sky Blue. Brynjarsdóttir was recently named to Iceland’s roster ahead of a pair of June friendlies.

Goldberg also tweeted that, according to Heath herself, the midfielder has made good strides in her recovery and hopes to see the field in the Thorns next home game. However, that won’t be until June 17, since Portland’s home-and-home series with Sky Blue is interrupted by the FIFA window.

During said FIFA window, Heath will remain in Portland, as she was unavailable for selection for the USWNT’s Scandinavian Tour because of the injury. 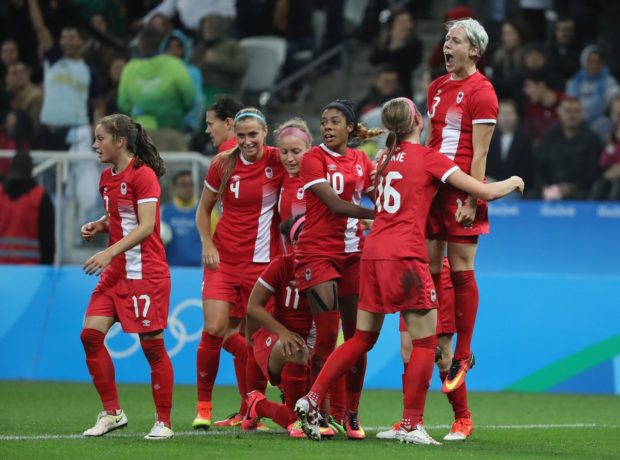 John Herdman announced his 19-player roster for a pair of upcoming friendlies against Costa Rica. Canada will first take on Costa Rica on June 8 in Winnipeg, followed by a June 11 clash in Toronto. The friendlies are the teams’ first meetings since the 2016 Olympic Qualifying semifinal, which Canada won, 3-1, to secure its spot in the Rio Olympics.

“It’s great to be back in Canada and the players are really looking forward to this series against Costa Rica,” Herdman said. “They have two world class players in Raquel Rodriguez (Sky Blue FC) and Shirley Cruz (Paris Saint-Germain), and as a team they’ve been improving over the years. It’s important that our team are continually exposed to CONCACAF opponents, who offer a very different challenge to what we’ve just experienced in Europe with Germany and Sweden.”

The June roster features many players from Canada’s bronze medal-winning squad. The NWSL is also heavily represented on the roster, with 11 of the 19 players hailing from the league.

Despite recently returning in goal for FC Rosengard, goalkeeper Erin McLeod was not included on the June roster. McLeod aggravated her ACL during the Olympic Qualifiers in February 2016 before tearing it completely during FC Rosengard’s Champions League semifinal match against FFC Frankfurt. The injury, her third ACL tear, sidelined McLeod for the 2016 Summer Olympics. She recently trained with Canada during its April camp in Europe, but she was not rostered for the team’s friendlies against Sweden or Germany.

Seattle Reign FC midfielder Diana Matheson is also not on the June roster as she continues recovering from an ACL tear of her own.

Before the June 11 match, Canada soccer will honor former CanWNT and NWSL players Josée Bélanger and Kaylyn Kyle, both of whom recently announced their retirements from the team. 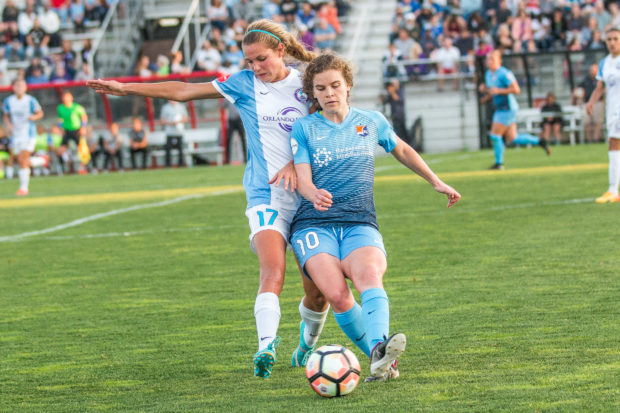 Dani Weatherholt, left, is one of seven NWSL players called up to the U-23 WNT. (photo copyright Katie Cahalin for The Equalizer)

The United States Under-23 women’s national team will be traveling to Sweden for the 2017 U-23 Open Nordic Tournament.

In the four-team tournament, the U.S. will be facing off against Norway on June 6, England on June 9 and the host nation Sweden on June 12. The team departs for Sweden on June 1, and it is uncertain whether all seven NWSL players will be available for their club’s matches this weekend. However, FC Kansas City said they expect Gibbons to be available, and Boston and Seattle confirmed to The Equalizer that Purce and McNabb respectively would be joining the U-23 following their clubs’ matches this weekend.

The U.S. U-17 women’s national team is headed back to California for its third camp of 2017. Head coach Mark Carr has named 22 players to his roster for the camp, which runs from June 2-11 at the Elite Athlete Training Center in Chula Vista, Calif. The camp is part of the team’s preparation for a trip to China next month.

Included on the roster are three players in their second cycle with the U-17s: forward Jordan Canniff and defenders Kennedy Wesley and Kate Wiesner. All three were members of the U.S.’s 2016 U-17 World Cup squad that won only one of its three group stage matches, failing to advance to the knockout stage.

The U-17 team is currently at the start of a new cycle in which they will strive to qualify for the 2018 U-17 World Cup.

The Kronick Report: Sauerbrunn earns GOTW honors with classy header
The Lowdown: Trouble down the table