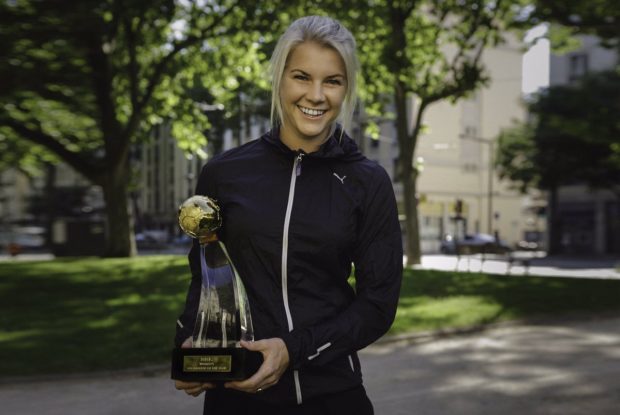 Ada Hegerberg with her BBC World Footballer of the Year trophy.

Ada Hegerberg has been named BBC World Footballer of the Year. The Lyon and Norway striker has emerged as one of the top scorers in the world. In 2016 Hegerberg helped Lyon win the treble—the French League, French Cup, and UWCL Champions League.
“Wow, it’s a surprise,” Hegerberg said. “It’s a huge honor to win, with such big-name footballers nominated. It’s really special, so many people from different cultures and countries voting for this trophy, it’s a huge motivation in itself.”
Hegerberg won a fan vote against four other players who were nominated by a select panel of international media. Marta finished second in the voting followed by Christine Sinclair. Hedvig Lindahl and Melanie Behringer were also on the short list.
Combining domestic and international play in 2016, Hergerberg scored 46 goals in 2016 including the opener in Lyon’s Champions League win over Wolfsburg. This Thursday, Hergerberg and Lyon will attempt to finish off a second consecutive treble when they play Paris Saint-Germain in the Champions League final in Wales.

Hegerberg will not turn 22 until July. 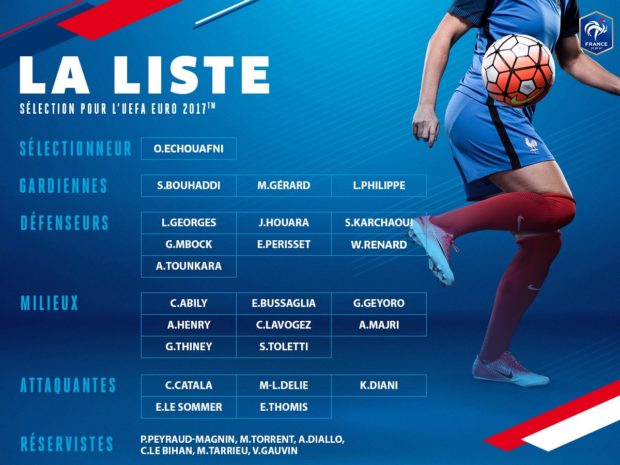 France, one of the favorites for this summer’s European Championships, have named their roster for the event. First-year head coach Olivier Echouafni named 23 players and 6 alternates for the event that kicks off July 16 in the Netherlands. France are grouped with Iceland, Austria, and Switzerland, and many are fancying their chances after they won the SheBelieves Cup in the United States earlier this year.

The full roster by position:

Dagny Brynjarsdottir has not played for the Thorns this season due to a back sprain, but she has been called in to Iceland’s national team for a pair of friendly matches next month. Iceland will play Ireland on June 8 and then hosts Brazil on June 12 in their last two matches before the Euro’s.

Japan will have Rumi Utsugi in the team when they visit Euro host Netherlands for matches June 9 and 13. Utsugi will not be joined by Reign teammate Nahoi Kawasumi who was not called in by Asako Takakura.

Iceland’s full 24-woman roster is below:

Josee Belanger has announced her retirement from soccer. (photo by Canada Soccer)

“Over the past few months, I’ve taken the time to look back over my 25-year career. I’m leaving the soccer world with a sense of accomplishment, which for me is just as rewarding as winning an Olympic medal,” Bélanger, who won a bronze medal with Canada in Rio, said. “Soccer has enabled me to grow as a person first and foremost, and this is what I find most gratifying.”

Bélanger was first capped with Canada in 2004 and started in 44 of 57 total appearances for her country. She was a part of Canada’s 2015 World Cup, scoring the game-winning goal against Switzerland to send Canada to the quarterfinals, and their 2016 bronze medal-winning Olympic squad. As a player who split time playing forward and defender, she also scored seven international goals. Her last appearance for Canada was during its Bronze Medal Celebration match against Mexico on February 4, 2017, for which she started.

Bélanger’s last club team was the Pride, whom she was allocated to last season. She started in all 14 appearances she made for the club. However, she and fellow Canadian Kaylyn Kyle, who announced her retirement from international soccer in April, lost their allocation status ahead of the 2017 season, and neither returned to the Pride.

“Josée has lived her life to perform for her country in every way, shape, and form,” Canada WNT head coach John Herdman said. “She’s been a great role model for the young players particularly, so to lose that within our team will be a big loss for our country. On the field, you’ve seen her—she’s just a competitor—an absolute machine. One of her strongest attributes is her mindset—you just cannot break this woman.”

In addition to an Olympic bronze medal, Bélanger also has a number of other awards and accolades to her name. Most recently for her 2016-2017 season, she won Le Maurice from Sports Quebec as the international team athlete of the year. In 2015, she was runner-up for the Canada Soccer Player of the Year. She was also a 2010 CONCACAF champion, won a CONCACAF youth title in 2004, and won the Damallsvenskan title with FC Rosengård in 2015.

Both Bélanger and Kyle will be honored before Canada’s upcoming June 11 friendly against Costa Rica. Canada Soccer said it is expecting additional retirement announcements leading up to that match.